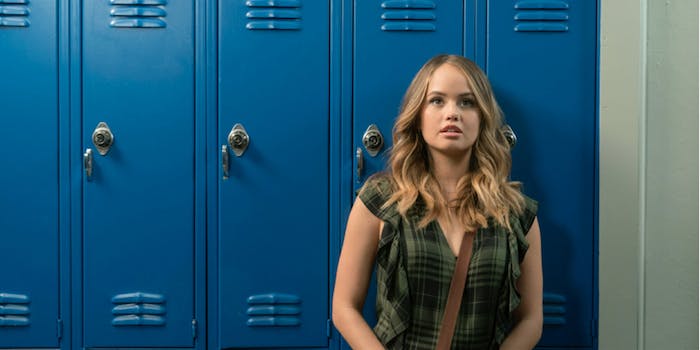 The controversial series struggles to find its story.

At the beginning of Insatiable, Patty (former Disney Channel star Debby Ryan) reveals her lifelong battle with her weight and her nickname: Fatty Patty. She’s in high school and she’s miserable—an evergreen pitch for a TV show aimed at young people. Patty is self-aware and has a focused rage. But we don’t spend much time with that version of her.

When the trailer for Insatiable was released in late July, the internet pounced on its presentation of an actress in a fat suit (Ryan) and accused the show of fat-shaming. There was even a petition to cancel it. Creator Lauren Gussis (Dexter) tweeted out a defense, claiming that at 13 she was “suicidal” and developed an eating disorder. She said the series is a “cautionary tale about how damaging it can be to believe the outsides are more important.” Ryan also defended the show, saying, “Satire is a way to poke fun at the hardest things.” Netflix tried to shape the narrative and promised that it would provide a criticism of body-shaming. It was a savvy move considering the hyper-awareness and policing around women’s bodies, but even with those pillars in place—personal experience, satire, criticism—Insatiable struggles to find its story.

The trouble starts when Patty befriends lawyer Bob Armstrong (Dallas Roberts), who takes her as a client after she punches a vagrant who called her fat. After the assault, Patty’s jaw is wired shut and she suddenly loses weight over the course of summer break. (There is no extra skin shown, there are no visible stretch marks.) Jaw-wiring feels like an easy way to skip right to the thin Patty storyline, but it doesn’t seem like a particularly responsible thing to do. Then there’s the “revenge” aspect, which plays out in some confusing ways. It’s a tired trope, especially considering the existence of shows like Khloé Kardashian’s Revenge Body and also the term revenge body.

Without food as her solace (whether she still has issues is never really addressed), she develops an unhealthy obsession with Bob, who was also overweight when he was younger. But now he wants to use Patty to win beauty pageants and fills her head with platitudes like, “Skinny is magic.” At one point Patty asks, “Can I call you daddy?” It’s weird.

There are a lot of people obsessed with pageants in this town for some reason, and a lot of interesting, wide-ranging takes on the Southern accent. The bulk of the series focuses on Patty trying to win pageants or compete with other women, but that thread gets fairly tiresome by episode 5. Could there have been a more creative, less literal metaphor for the way women’s bodies are viewed and judged? Does Patty have any other interests and hobbies?

Patty’s mom (Sarah Colonna) also has addiction issues: She’s a recovering alcoholic. Late in the series, they have a heart-to-heart about how addiction has shaped their lives, but early on the relationship isn’t fully formed. Everyone in the town is pretty fucked up, and while shows with terrible people are popular (Succession is one recent example), the people in Insatiable aren’t even that interesting in their villainy. The rival pageant girls are mostly one-dimensional caricatures; Bob (not to be confused with a rival lawyer named Bob who always has his shirt off) is pretty manipulative. There are a lot of weird adult-teen relationships that aren’t really commented on, and some cringe-worthy gay jokes. The subplot involving Patty’s best friend Nonnie (Kimmy Shields) trying to figure out her sexuality is one of the only storylines that feels grounded and real.

Next to a series like AMC’s Dietland, which offers a more layered exploration of what women who are overweight have to deal with on a daily basis, Insatiable’s proposed satire is a bit obscured. The show is trying to say something about women’s anger and rage—how it’s channeled and sometimes misplaced. But much of that gets lost in the noise.