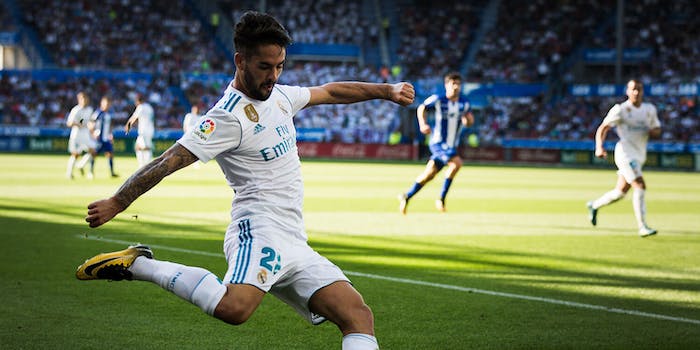 How to stream Real Madrid vs. Alaves live

Real Madrid will try to keep pace with Barcelona in Saturday's early match against Alaves.

It’s on: Real Madrid and Barcelona are locked in a dead heat for La Liga supremacy, and every slip-up by one team is an opportunity for the other to get ahead. Real Madrid will look to keep pace, even after a disappointment in Champions League still looming over the squad, as it heads to Basque Country to face Alaves in an early match on Saturday.

Here’s everything you need to know to stream Real Madrid vs. Alaves live.

Real Madrid (Recent form: LWDDW) is riding a four-match unbeaten streak in La Liga, including a come-from-behind win over Real Sociedad last weekend. Goals from Karim Benzema, Federico Valverde, and Luka Modric were more than enough to overcome a second-minute goal. However, in Champions League, Real let a 1-0 lead turn into a 2-2 draw against PSG. That means Real will finish second in its group regardless of the final-day results … meaning a potential clash of titans in the Round of 16 against a Bayern, Liverpool, or Juventus. Stay tuned.

Alaves (Recent form: LDLWW) is holding steady in a mid-table position thanks to recent back-to-back wins. Last Sunday, Joselu was the hero with 85th-minute and stoppage-time goals to lift the Babazorros to a 2-0 win over Eibar. That was good enough to lift them six points clear of safety in what’s shaping up to be a wild La Liga race at both ends of the table.