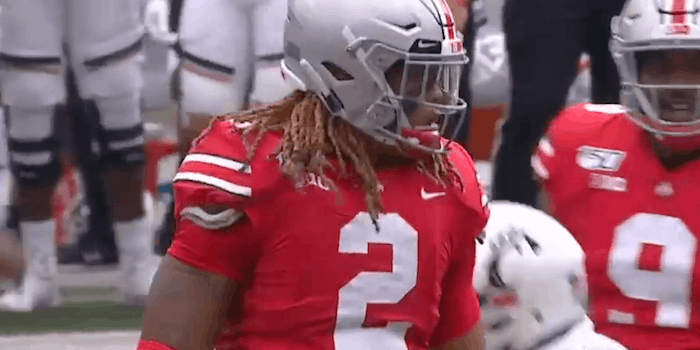 How to stream Ohio State vs. Penn State live

It’s the battle of two Big 10 heavyweights on Saturday. The No. 9 Penn State Nittany Lions (9-1, 6-1 Big Ten) travel to take on the undefeated No. 2 Ohio State Buckeyes (10-0, 7-0), who are currently on a seemingly inevitable march toward the College Football Playoff. (Though Penn State might have something to say about that.)

Penn State successfully bounced back from its 31-26 loss at Minnesota with an ugly win over Indiana, 34-27, at home last Saturday.

Ohio State, on the other hand, has been dominating in every game so far this season, including drubbings of Maryland (73-14) and Rutgers (56-21). Led by quarterback Justin Fields–who’s thrown 31 touchdown passes to just a single interception–the Buckeyes rank first in the nation in scoring at 51.5 points per game.

However, the Chase Young-led defense also leads the country in scoring defense, holding opponents to just 9.8 points per game. As a unit, they’ve amassed 42 sacks and 13 interceptions. The powerful and athletic Young–who will be back from a suspension served after accepting (and repaying) a small loan–has 13.5 sacks, with another 10.5 tackles for loss.

The Nittany Lions will need to press the Buckeyes by altering field position, which means big plays on special teams. Timely takeaways with their own vaunted defense will be essential.

Ohio State vs. Penn State: What to watch for

The key will be whether Penn State can have any success in blocking Chase Young, an edge disruptor so talented to the point of an understatement. He’s one of the great pass rushers in the modern era, and that fact isn’t harped on nearly enough.

Ohio State’s 1,000-yard rusher J.K. Dobbins will also need to be held up. The idea would be to force QB Justin Fields into making more decisions, and perhaps taking more sacks than necessary, creating more 3rd-and-long situations where Penn State would win by flooding the secondary.

To say this will be a monumental task for the Nittany Lions is obvious, but the reward would be significant: A chance to leap back into the playoff picture.

Holding the chalk line, Ohio State is a whopping 19-point favorite on the road, according to Odds Shark. If they have success against Young, and can win the turnover margin battle, the Nittany Lions will have a slim shot at an upset.