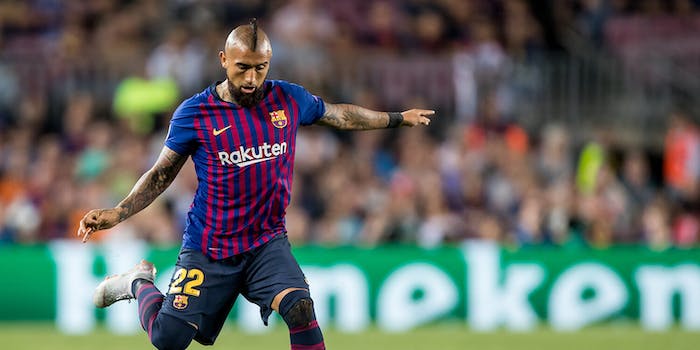 How to stream Barcelona vs. Espanyol live

Barcelona's playing its crosstown rivals on Saturday, and trying to put distance between itself and Real Madrid.

Barcelona’s got the inside track on the La Liga title headed into the New Year, though that can change with any Barcelona loss down the stretch. Real Madrid’s been keeping pace with its main rivals all season, and a number of teams, including Sevilla and Atletico Madrid, have made the race interesting.

To start out 2020, Barcelona will make the short trip to Cornellà de Llobregat for the Barcelona Derby against a confounding Espanyol team.

Here’s everything you need to know to watch Barcelona vs. Espanyol live online.

Barcelona (Last 5 La Liga matches: WWDDW) finally got a win to close out 2019. The 4-1 win over Alaves gave veteran Arturo Vidal the opportunity to score, joining MSG (Lionel Messi, Luis Suarez, and Antoine Griezmann) on the scoresheet. That win, coupled with Real Madrid’s draw against Athletic Bilbao, put just a bit of distance between Barca and Real in the La Liga title race.

Espanyol (Last 5 La Liga matches: DLLDL) continues its Jekyll-and-Hyde season. It’s in danger of being relegated while at the same time gearing up for a Europa League knockout match against Wolves next month. Espanyol lost its last match of 2019, falling 2-0 to Leganes in a relegation six-pointer. It hasn’t won a La Liga match, in fact, since October. If it wants to stay in La Liga next year, it needs to put together some wins quickly, though doing it against the league leaders might prove to be a challenge.