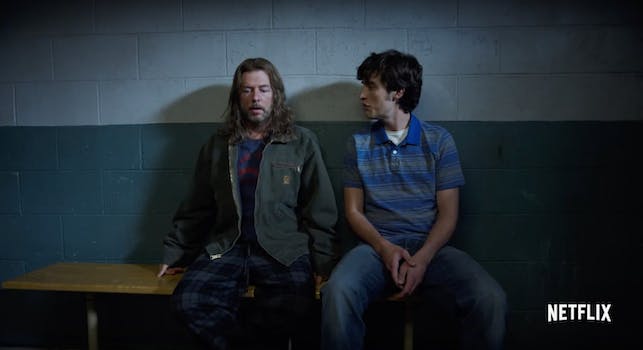 ‘Father Of the Year’ is another baffling, bonkers Happy Madison comedy

What is Adam Sandler doing?

What is the point of Adam Sandler’s Netflix movies? Other than the money, other than the roles for his friends and family, other than the fact that Netflix will apparently throw anything down its content well, regardless of whether it has a chance of making a splash or not—what’s he doing here? Sandler’s continued existence as an artist must be tied to something more than merely punishing his audience.

It is within this framework that I am forced to consider Father of the Year, the latest from Sandler’s Happy Madison production company to be sucked into the streaming abyss. The film stars Joey Bragg (Wet Hot American Summer: Ten Years Later, Disney Channel’s Liv and Maddie) and Matt Shively (Santa Clarita Diet, The Real O’Neals), as Ben and Larry, two childhood best friends home for the summer after graduating college. One night, they get into a drunken argument about which one of their dads would win in a fight. When Ben’s father, the white-trash Wayne, hears that Larry’s father, the nerdy Mardy, has said that he could beat Wayne up, things quickly get taken too far.

Happy Madison company staple David Spade plays Wayne, in an over-the-top, Boston-accented performance which feels like it was written for Sandler himself. Of course, Spade is no stranger to playing these guys. One of his more iconic characters remains the underdog Joe Dirt. But Wayne is a lazy character in a lazy movie, and Spade is giving a lazy performance. As someone who always preferred sarcastic Spade to trailer-park Spade, it’s doubly disappointing.

Spade is joined by other members of Sandler’s stable, including his wife Jackie, his nephew Jared, his pal Allen Covert, and the voice of his SNL peer Kevin Nealon. (Again, let it never be said that the guy doesn’t take care of his own.) It’s the new additions to the Sandlerverse who are more interesting though. Nat Faxon brings the most he can to Mardy, who amounts to a stereotypically overlooked beta male. It’s odd to see him in this movie at all, considering he’s never run with the Happy Madison crew before. Perhaps Rob Schneider wasn’t available, or they didn’t think Kevin James could convincingly play a scientist.

The best part of Father of the Year is the younger cast members, who bring a much-needed vitality to an ensemble that’s long been dominated by over-the-hill men. This whole movie’s premise is predicated on the conceit of older dudes acting immature, but it’s the scenes of Bragg and Shively playing off one another that work best.

This is where I start to look for hidden depths again. With Sandler’s last Netflix film, the surprisingly tolerable The Week Of, he seemed to be considering his role as a father and moved to make a movie which reflected his own experiences watching his daughters grow up. But despite Father of the Year’s title, it isn’t another movie about parenthood. The difference between this and something like Grown Ups is an absence of nostalgia. In one, Sandler and his own friends recount their glory days. In the other, up-and-comers appear poised and ready to take on the world.

I chuckled a good amount of times throughout this movie. I laughed at moments. Guffawed, even. It’s funnier than The Week Of. That doesn’t mean it’s not also a mess.

Besides being, like most Happy Madison joints, intermittently racist, sexist, homophobic, and ageist, Father of the Year’s biggest problem is that it feels like a rough draft. Many comedies take a decent premise and stretch it. This one takes a great premise and uses it up in the first act. Once Wayne and Mardy have their initial fight, about 20 minutes in, I had no idea where this movie was going, and it felt like the writers didn’t either.

This isn’t just a problem with Netflix’s Sandler movies. Even the platform’s good originals often feel like they could’ve used another polish. Netflix has upended the paradigm by putting creative control back in the hands of the creators. Where other studios buy scripts which never get made, sending projects into development hell for years, letting them die on the vine as they languish in a never-ending cycle of pitches and rewrites, Netflix will make anything. The streaming giant might not promote it (Father of the Year has received a pitiful amount of press attention), but it was made. But one can’t help but wonder if these hasty greenlights occasionally lead to scripts going into production before they’re ready.

Writers Brandon Cournoyer and Tyler Spindel (who also directed the movie) came up working on various Happy Madison productions, before eventually being handed the keys to the kingdom with Father of the Year. Despite their lack of experience, it’s hard to blame them too much for the movie’s faults. Yes, there are ridiculous scenes like a guy flying off his motorcycle and then his friends assuming he’s totally fine. Yes, there are recycled tropes, like the old, uncool dude who gets whacked out of his mind on drugs. But Spindel and Cournoyer bring some fun, new stuff to the Happy Madison crew too. The meandering, existential crossroads that Ben and Larry find themselves at harkens back to directors like Richard Linklater and Joe Swanberg.

That’s why it’s a shame that Spindel and Cournoyer didn’t have better influences in Netflix and Sandler that could’ve given this thing some structure. Father of the Year commits basically every screenwriting sin in the book, from inactive characters to overwritten dialog, to introducing storylines which are either unresolved or dropped abruptly. When one of the leads abruptly announces they’re joining the Marines toward the end of the movie, it’s laughingly half-baked.

Spindel and Cournoyer are set to make another Happy Madison movie for Netflix, and I wish them all the luck in the world improving on this one. In the meantime, I shall continue to stare into the abyss, questioning the aimless Sandlerverse, wondering: If a bad movie arrives on streaming without a signal, does it make a sound?