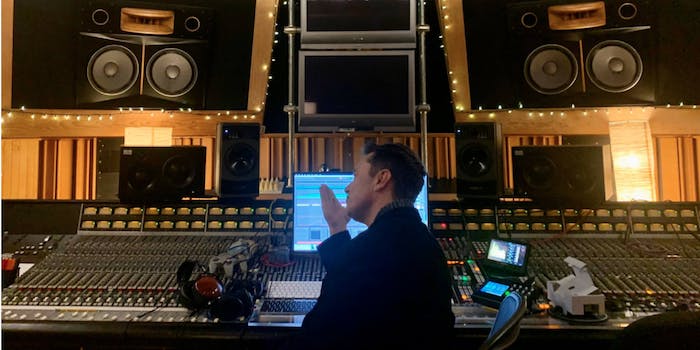 Elon Musk was up late making EDM for SoundCloud.

It’s the last day of a chaotic, tragic, seemingly neverending January, and Elon Musk has one more surprise: A new song called “Don’t Doubt ur Vibe.”

The Tesla CEO, who changed his Twitter handle to E “D” M to convey the specific vibes, dropped the song on SoundCloud in the early morning hours, and boasted that he “wrote the lyrics & performed the vocals!!”

I wrote the lyrics & performed the vocals!!

The lyrics are just the same two lines repeated, and the song certainly sounds like EDM. While Musk’s partner Grimes was not pictured in his behind-the-scenes photos, she posted a video of Musk awkwardly raging on her Instagram stories. Musk also posted a Joker meme that incorporates the “Toss a Coin to Your Witcher” meme, though his song doesn’t quite have the same catchiness as the Witcher breakout.

The only other track on Musk’s SoundCloud is from less than a year ago, “RIP Harambe,” and, at least from a production standpoint, this new song is an upgrade. As pointed out by The Guardian, the song that autoplays after “Don’t Doubt ur Vibe” is called “Erectile Dysfunction,” from Boise artist almndjoy, and the newer comments all reference Musk.

But we have to think of the future. And people have already proposed a chilling theory about where this song might end up: that cursed Cybertruck.

This new @elonmusk track "Don't Doubt Your Vibe" will come pre-installed on all Cybertrucks like the U2 album https://t.co/74237BOtbH h/t @adrjeffries