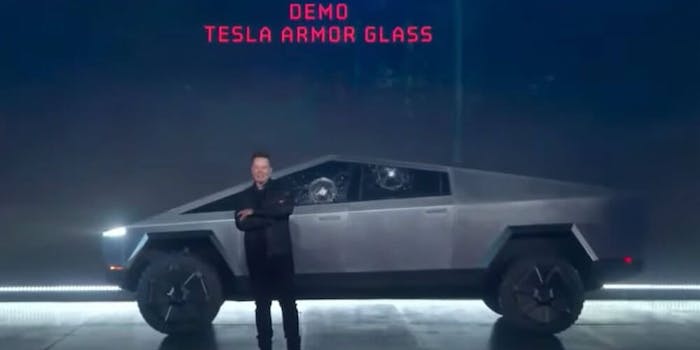 Musk was attempting to demonstrate how tough it was.

Tesla CEO Elon Musk unveiled a new electric pickup trick on Thursday and was mocked online in the process.

The vehicle, dubbed the Tesla Cybertruck, was showcased in a late-night live stream intended to detail all of the machine’s features.

In an effort the show the Cybertruck’s robustness, Musk ordered Franz von Holzhausen, Tesla’s chief of design, to hit the driver’s side door with a sledgehammer. It survived.

But when Musk asked Franz to throw a metal ball at the truck’s bulletproof windows, things went somewhat downhill. Both the driver’s side window and the passenger window broke, leading Musk to laughingly proclaim: “Oh my fucking god!”

The live stream, of course, immediately caught the attention of users on Twitter, who mocked the vehicle’s tank-like appearance and fragile windows. The truck itself has become an instant internet meme.

“Elon Musk respects memes so much he invented a car that an unruly teen can hit with a ‘what are those?'” Twitter user @PFTCommenter joked.

they tried to show you can't break the windows but they did break so now Elon Musk is presenting in front of a busted car. incredible pic.twitter.com/T6rfXhYMxj

Elon Musk repsects memes so much he invented a car that a unruly teen can hit with a “what are those?” https://t.co/2WmAJJhb2K

Nothing will break the glass

Others noticed a striking similarity between the Cybertruck and the Warthog, the vehicle from Xbox’s Halo franchise.

Hey everyone my name is Elon Musk and I'm here today to announce the Shitty Car That Sucks. It costs forty thousand dollars, looks like a duct tape wallet, and in 2 years will auto download a patch that Rickrolls you if you hit the horn in the rain

Some even found a way to incorporate the new “gonna tell my kids” meme into the mix.

No dragging of Musk online would be complete though without a reference to weed.

To be fair, not all of the stunts at the Cybertruck event went haywire. Musk did show a video of the vehicle defeating a Ford F-150 in a game of tug-of-war. The truck also defeated a Porsche 911 in a drag race with its ability to hit 60mph in a staggering 2.9 seconds.

The truck will start at $39,900 and come in three versions, with ranges of 250 miles, 300 miles, and 500 miles. Those interested can preorder the vehicle on Tesla’s website and expect their Cybertruck at some point in late 2021.