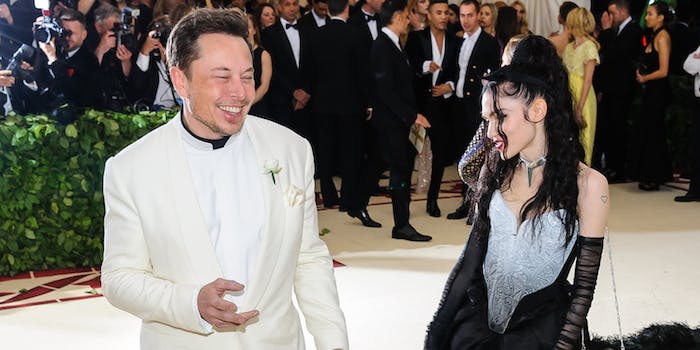 Unconfirmed baby gets flamed to ashes on social.

Elon Musk and Grimes might be expecting a baby.

People all over the web are talking about an Instagram update from Grimes in which she indicated she was “knocked up.” Neither Grimes or Musk—her boyfriend and presumably the father—have confirmed the news, but that isn’t stopping most of the internet from pouncing on the story. As rumors spread, so did the memes. Social media was quickly flooded late Wednesday with memes of what Musk and Grimes’ potential child might look like.

Grimes is pregnant and although that child will be very rich I can’t help but feel very worried for its future.. she’s gonna sacrifice it in some weird AI blood ritual pic.twitter.com/UALkKu2RiQ

The original Instagram post from Grimes—whose real name is Claire Elise Boucher—was quickly removed, presumably for violating its nudity policy, but the post was shared by several fans of the 31-year-old musician. In it, a topless Grimes with what appears to be a baby bump smolders at the camera. The shadow of a digitally altered fetus can be seen on her stomach.

While fans had plenty of theories about the image, Grimes appeared to remove all doubt in her response to a commenter. After one person noted her uncensored nipples, Grimes noted that she considered censoring them but decided otherwise. “I thought about censoring them for a hot minute,” she wrote. “But the photo is so much less feral without the nipples. Plus being knocked up is a very feral & war-like state of being. Might as well be what it is.”

That’s when the memes hit social.

The majority of the memes centered around what the child will look like. They seem to agree on one thing: That baby is going to be an oddball, just like its parents.

Grimes and Elon's baby after coming home from the hospital pic.twitter.com/ZkXNLjxiph

While most meme creators were busy obsessing over the baby’s appearance, other people poked fun at Grimes’ unique musical style, as well as she and Musk’s odd public personas: Musk makes brash predictions about the future while smoking weed on podcasts, and Grimes writes critically acclaimed indie rock that she brings to life with eye-catching performance art. Jokes about the baby’s name, first words, and fashion quickly followed.

grimes and her child having an argument pic.twitter.com/HBhrH2b1K6

elon musk: what do u wanna name our baby (:
grimes: pic.twitter.com/6TPvwkYcJr

grimes when she finds out you can’t name a baby the combination of ancient runes and emojispic.twitter.com/Xt28OhSK0J

elon musk: what do u wanna name our baby (:
grimes: pic.twitter.com/J6uG2EAOPB

The slightly creepy vibe of Grimes’ announcement also became a talking point and inspired a wave of demonic baby memes.

Grimes and Elon going to check in on their baby when they hear it cry pic.twitter.com/YSrRQxELHF

This gon be grimes and elon musks baby pic.twitter.com/lBwxa9f9Iz

One user pointed out that many of the memes seemed harsh, considering the target was, for the most part, an unborn child. “Grimes’s baby is getting cyber bullied n it hasn’t even left the womb yet,” they wrote.

grimes’s baby is getting cyber bullied n it hasn’t even left the womb yet . sort of inspiring

Buckle up, people: If Grimes really is pregnant, the memes are unlikely to stop anytime soon.