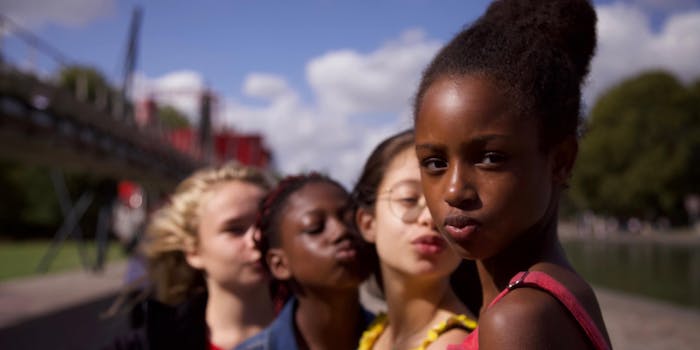 In ‘Cuties,’ the contradictions of growing up come to a head

An 11-year-old girl befriends a group trying to win a dance competition.

Puberty, especially for many pre-teen and teenage girls, is often full of contradictions. They’re objectified and handled with gloves, they’re expected to act older and younger than they are, they’re prodded and shamed and pushed in conflicting directions—often at a whim—when seemingly every decision they make is chastised. Societal pressure, whether it’s through their family, their friends, their classmates, the media they consume, or even the instant gratification of social media, is all-consuming. And for Amy (Fathia Youssouf)—the 11-year-old at the center of Cuties—all of that is laid bare as it starts to deconstruct those contradictions.

An 11-year-old girl attending a new school in Paris befriends a group of girls—who are trying to win a local dance competition—as puberty,  and a clash of ideals between her friends and family emerge.

Like many girls around her age, Amy dons a different persona, both with her outfits and her demeanor, depending on who she’s with. After she and her family move into an apartment in a poor Paris neighborhood, she’s expected to look after her younger siblings and help her mother Mariam dutifully prepare for her husband’s wedding to his second wife when they arrive from Senegal. Their tightknit Muslim community largely sees the wedding as a blessing and expects them to welcome the new family with open arms.

At school, she becomes fascinated by “the Cuties,” a group of girls who act out and wear revealing clothing. Under the train tracks, the Cuties practice dance moves in hopes of winning a local competition, and while those girls are as close as friends can be, that friendship can be picked up or dropped on a whim; they each have the capacity to wield that cruelty like a sharpened knife and jam it where it hurts most.

Amy is a constant witness, whether she’s processing her rage in silence as she glimpses the mask her mother wears slip for the briefest of moments or watching the Cuties practice their dance routine from afar; she’s expected to fit in a certain box, and she’s punished if she strays outside of it. It’s not until Amy starts utilizing a smartphone she obtains (and keeps a secret from her family) that she starts paving her own way; she even contributes more moves to the dance routine to make their dance even more provocative. But she also finds out the hard way the hypocrisy that is being a girl on the cusp of discovering who she is. She’s continually haunted by the dress she’s supposed to wear to her father’s wedding and everything that represents, and as she heads on that downward spiral, she’s unrecognizable to just about everyone who knows her; at times, the melodramatics of the situation lean into the absurd and border on implausible.

Written and directed by Maïmouna Doucouré (whose script won a Sundance Institute Global Filmmaking Award in 2017), Cuties nails down just how isolating and uncomfortable being a young girl in the world can be, elevated largely by Youssouf’s performance. Amy—and so many girls out there, really—are judged and shamed for wearing too much clothing, wearing too little clothing, wearing the wrong type of clothing, for the way they dance, for not accepting everything at face value or with a smile, for chasing that high on social media, and for what they post. They’re expected to act like adults and children all at once, but when faced with one reality of children acting like adults, it’s downright uncomfortable.

At one point, Amy lays two very different outfits on a bed, the two sides of her double life, that almost look like they could’ve been made from the same cloth. The metaphor is hamfisted and it takes some clunky maneuvering to get there, but the message—while muddied—gets across just the same.

Cuties is screening at the Sundance Film Festival.