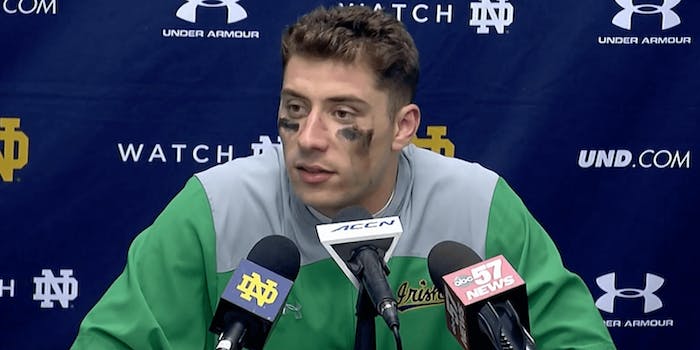 How to stream Navy vs. Notre Dame live

Navy vs. Notre Dame is a great college football rivalry on its own. This year, they're both ranked.

One of the big traditional matchups of the season happens Saturday, as the No. 23 Navy Midshipmen travel to visit Touchdown Jesus and the No. 16 Notre Dame Fighting Irish.

Navy had a bye in Week 11, but improved to a 7-1 record with a dominant 56-10 victory during Week 10 over the hapless Connecticut Huskies. Dual-threat QB Malcolm Perry passed for 165 yards and one touchdown and rushed for 108 yards and two more scores in the win. Perry has thrown for 722 yards, five touchdowns, and three interceptions, and also leads Navy in rushing with 1,042 yards and 16 touchdowns. Mychal Cooper leads Navy with 241 receiving yards.

Navy vs. Notre Dame: What to watch for

Navy is no longer just a plucky program, ranking in the top 20 in scoring offense and scoring defense. The Midshipmen will arrive ready to win in a matchup where both teams come in ranked for the first time since 1978.

Not helping matters for Notre Dame, defensive end Julian Okwara is done for the season with a broken leg. Book and Jones will need to replicate their recent performances, and keep Perry off the field, in order for the Irish to succeed.

Holding the chalk line at home, Notre Dame is a 9.5-point favorite, according to Odds Shark. However, expect a high scoring affair that could go either way.