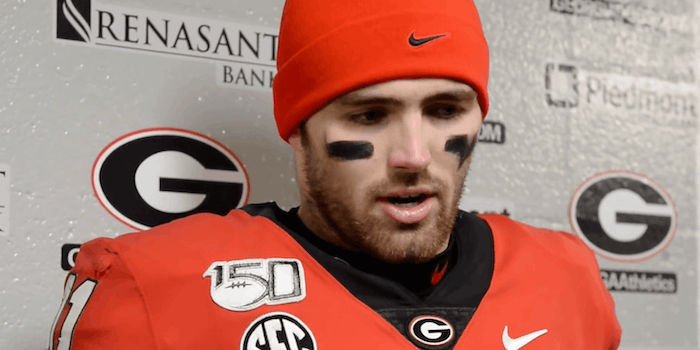 How to watch Georgia vs. Auburn live

It’s the battle of two SEC heavyweights as the No. 4 Georgia Bulldogs try to take a bite out of the No. 12 Auburn Tigers on Saturday—and stay into the Top Four picture in the process.

Georgia (8-1, 5-1 SEC) still have College Football Playoff and conference title hopes. The Bulldogs lead the SEC East division and maintain the inside track to the SEC championship berth should they win out. D’Andre Swift, the best back in the conference, leads the Bulldogs in rushing with 921 yards.

Auburn (7-2, 4-2 SEC), meanwhile, could vault themselves into a New Year’s Day bowl game with what would be a signature win that would completely derail Georgia’s CFP aspirations. JaTarvious Whitlow leads a loaded War Eagle running back committee with 553 rushing yards.

The main question for the Tigers’ 45th-ranked patchwork offense is whether they can generate enough offense against the Bulldogs’ No. 2 scoring defense, which allows just 10.1 points per game. Though Auburn’s defense allows 17.4 points per game, good for 13th in FBS, the talent differential could show in the trenches, where the Bulldogs like to grind away into the opposition’s depth.

How to stream Georgia vs. Auburn live: Watch SEC football

Georgia vs. Auburn: What to watch for

Auburn wants to play spoiler, while Georgia needs this game to get into the playoff mix. Georgia quarterback Jake Fromm has played in big games against great teams, while Auburn QB Bo Nix will be facing the best defense he will have seen all season, in the biggest game in his college career so far.

Controlling the run will be key for both clubs. The teams are neck and neck in rushing at between 215 and 220 yards per game; however, Georgia allows just 74.6 rushing yards a game (5th nationally) to Auburn’s 112.7.

Holding the chalk line, Georgia is a 2.5-point favorite on the road, according to Odds Shark. Expect the game to hit under the 37 line in an SEC slugfest, with Georgia’s defense putting Auburn’s offense in a black and red vice grip.