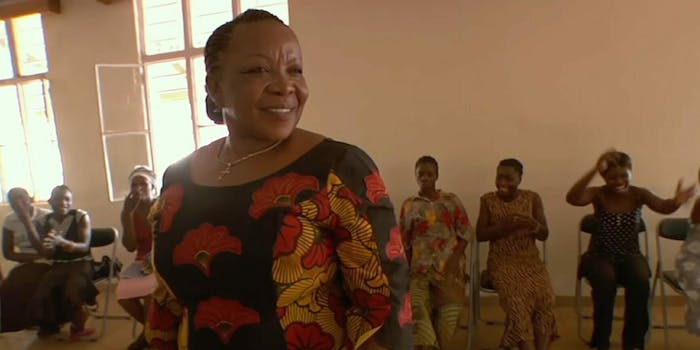 Netflix’s ‘City of Joy’ brings hope to a desperate community

In war-torn Eastern Congo, women bear the brunt of the violence.

Netflix has built an impressive library of documentaries in relatively short order. Just last year the company had two Academy Award nominees and won for Icarus. I don’t know how City of Joy will do during awards season, but it is a top-tier Netflix doc.

The film goes deep into the war-torn Eastern Congo, a place ravaged by violence. While no one is safe from the militias, women bear the brunt of the violence. City of Joy gives light to survivors and the efforts of those working to heal their community. The stories of strength and survival are breathtaking. Director Madeleine Gavin takes viewers to a small gated community, dubbed City of Joy. Its occupants are women who have survived unspeakable suffering at the hands of militias. Tough as it can be to watch at times, City of Joy is a paean to perseverance.

Early in the doc, someone explains that inflicting suffering on the women is a tactic to destroy communities. Judging by the stories of slaughter and sexual assault, it’s effective. So these women who are left broken come to City of Joy to rebuild themselves. Under the guidance of Dr. Mukwege and activist Christine Schuler-Deschryver, with help from The Vagina Monologues playwright Eve Ensler, the women share their stories of trauma and lift each other up.

Late in the film, Schuler-Deschryver, a fiery woman, falls silent after telling a story about local children who dream of having bigger feet and longer legs so they have a better chance to outrun the soldiers. In a film full of poignant moments, this one might be the most touching. But City of Joy isn’t interested in pulling your heartstrings. If anything, Gavin is showing the world its failures. Despite pleas for help, nations around the world, including the U.S., stand aside while war rages on. Even worse, most of the countries that can help in Congo instead mine the country for its resources as a humanitarian crisis unfolds.

City of Joy is the kind of documentary that can be hard to watch. It carries a mature rating on Netflix mostly due to descriptions of violence. It’s also essential viewing.

Need more ideas? Here are our Netflix guides for the best war movies, documentaries, anime, indie flicks, true crime, food shows, LGBT movies, gangster movies, Westerns, film noir, and movies based on true stories streaming right now. There are also sad moviesguaranteed to make you cry, weird movies to melt your brain, old movies when you need something classic, and standup specials when you really need to laugh. Or check out Flixable, a search engine for Netflix.