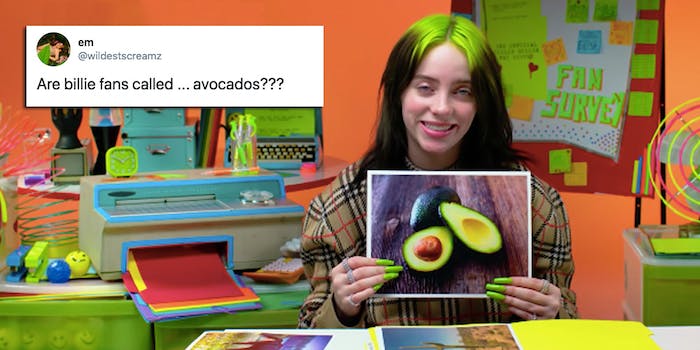 Billie Eilish fans riot after being referred to as ‘Avocados’

Billie Eilish likes to buck conventions and so do her fans. Even though the 18-year-old singer has been a recognizable name in music for over two years now (depending on what you define as “recognizable”), her considerable fanbase still doesn’t have a unified name by which they refer to themselves.

Over the years, we’ve seen a wide and creative array of fandom names for musical artists–Directioners (One Direction), Swifties (Taylor Swift), the Beyhive (Beyoncé), Little Monsters (Lady Gaga), the list goes on. But there hasn’t even been too much public debate as to what Eilish fans are called. They’re just… Billie Eilish fans, right?

The reference was quickly picked up on by another Twitter user, who asked the question on everyone’s mind: “Are billie fans called … avocados???”

The connection between the “Bad Guy” singer and millennials’ fave toast topping is a random and somewhat outdated one, but it wasn’t just pulled out of thin air.

Before Eilish began topping Billboard charts, she went through a series of different usernames on social media—old school style, aka random descriptors rather than just first and last name. The most prominent one was @wherearetheavocados, which was her Instagram name for a time.

“I made this grilled cheese once, I was in the kitchen and I wanted some avocado, I was home alone, so I just screamed ‘where are the avocados’ and I decided to make that my username and here we are,” Eilish explained in a 2017 interview. “Now there are fan accounts like billiesavocados, herearetheavocados, therearetheavocados and it’s just this random thing I thought of four years ago.”

But Eilish fans don’t seem interested in Avocados being their defining term. If Eilish ditched the account, avocados are basically dead to them.

“That was a long time ago,” Twitter user @bilfavor wrote. “Even billie cringes at the mention of them now.”

Almost all the fans who chimed in on the debate agreed.

Avocados???? Imagine saying "I'm a loyal avocado" "I trust other avocados" "you're a fake avocado because you don't stream billie' s music" kajsksjskshdhjs

A few fans came up with alternative suggestions since the avocado tweets basically opened a floodgate of discussions over a nameless fandom.

“We don’t have a name but I call us eyelashes,” Twitter user @LukeygagaX wrote, to which another user jokingly said Eilish fans should be called “billie-vers,” an apparent riff on Justin Bieber’s Beliebers.

So the fandom remains either torn on a name or just insistent that there is no name and never will be a name because Billie Eilish fans aren’t going to be chained down by the traditions of internet society.

Either way, it’s definitely not Avocados.