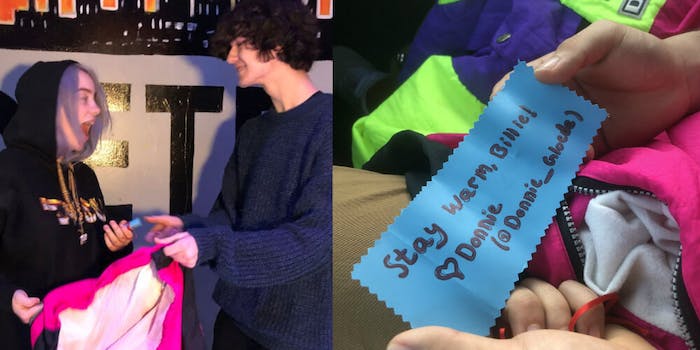 It still had a note addressed to Eilish in the pocket.

Thrift stores are known for housing hidden treasures, but chances are you’ve never seen a celebrity’s clothes on the racks.

Last week, Twitter user @arrrrrleth said she was shopping in an L.A. thrift store with her cousin when they came across a highlighter-colored jacket.

“My cousin found a jacket and decided to buy it inside of it was a note,” she wrote on Twitter, along with a photo of the jacket and a note that reads, “Stay warm, Billie!” next to the social media handle for a person named “Donnie,” @Donnie_Gloede.

So I was in LA, thrift shopping with my cousin. And we decided to check out this new thrift shop instead of going to the same ones we always go to. My cousin found a jacket and decided to buy it inside of it was a note pic.twitter.com/qomhRcFPwL

“I found the guys Instagram and there’s a pic of him giving the jacket to Billie. He gave.. this jacket… TO BILLIE EILISH,” arrrrrleth tweeted.

Last night was AMAZING hot dang I met Billie Eilish she was so sweet and funny and the concert was amazing and I’m so happy I got to experience it with a couple of fantastic ladies!

I found the guys Instagram and there’s a pic of him giving the jacket to Billie. He gave.. this jacket… TO BILLIE EILISH

The fan’s Instagram account contains photos of him with Eilish at a meet-and-greet. And sure enough, there are photos of him gifting her the same jacket. The fan, named Donnie Gloede, saw arrrrrleth’s tweets.

Still, arrrrrleth said she wasn’t letting the jacket to go waste. “Omg I’m so sorry at least it’s keeping me warm lol @billieeilish give @Donnie_Gloede tickets or something and make it up to him,” arrrrrleth tweeted to Gloede.

Eilish hasn’t responded to the tweets, but we assume she wasn’t being a “bad guy” when she gave the jacket away.