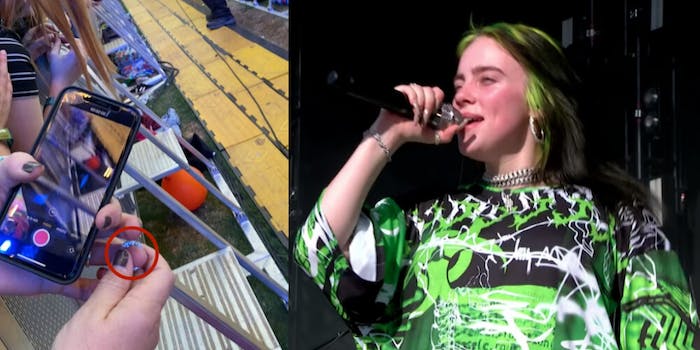 Billie Eilish fans think they figured out who stole her ring

The Twitter detectives shared video and photographic evidence of the alleged thief.

Billie Eilish was performing at a concert when she noticed something was amiss: Her ring went missing, and she believed someone in the crowd stole it. Eilish’s fans quickly rallied together on Twitter to get to the bottom of the theft. Now they think they may have cracked the case.

According to BuzzFeed, Eilish was performing at the Austin City Limits Festival in Texas when she noticed the jewelry was missing.

“Somebody stole my f*cking ring,” she told the crowd, who responded to the news with boos. “Ugh, guess that’s my fault. Keep that sh*t. Take care of that sh*t.”

Even though the 17-year-old seemed prepared to never see her ring again, her fans sprang to action and did some digging.

“Hey, @billieeilish,” one fan tweeted, along with footage of the concert. “I think I know when your ring got stolen.”

Hey, @billieeilish… I think I know when your ring got stolen. pic.twitter.com/zlXrngesXQ

In the video, screaming fans tug at Eilish’s hand while she sings into her mic. The video zooms in on the exact moment a fan appears to be grabbing her hand.

Other fans tweeted video and photographic evidence of the alleged ring thief. In one of the videos, a woman can be heard asking security to give her a ring from off of the floor, which she claims was hers and fell off.

“God, that must be her ring #billieeilish,” Twitter user @Alex666_Eilish wrote, along with the video.

God, that must be her ring #billieeilish pic.twitter.com/oTJCjKsiWB

Another Twitter user shared a video that captured a different moment of Eilish passing by fans and giving them high fives. A woman can be heard in the video saying, “I took her ring” after the singer passes by.

Yet another Twitter user shared screenshots from someone claiming to have found Eilish’s ring but that they were unable to return it because she was already backstage.

“I have it but don’t worry I won’t sell it,” the person wrote.

@billieeilish I found the person who stole ur diamond ring.. Assholes pic.twitter.com/i90R4CYmNN

“@billieeilish I was at ACL weekend 2 and my wife @chelsmacdftw has video and pictures of the lady who stole your ring!” Twitter user @jgorodo84 wrote, along with a photo of a woman putting a ring on her hand.

@billieeilish i was at ACL weekend 2 and my wife @chelsmacdftw has video and pictures of the lady who stole your ring! pic.twitter.com/bf4YPHeqBW

It’s unclear whether or not Billie Eilish will be taking any action to get her ring back, but one thing is for certain: She has some very dedicated fans who would make awesome detectives.