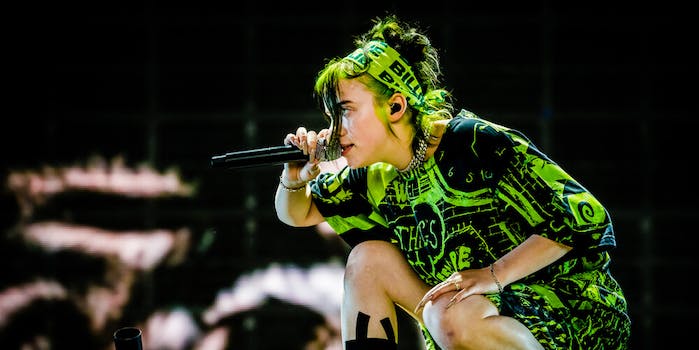 A vegan saying 'yikes' to a meat dress is high treason to some.

There’s nothing pop Twitter likes more than to throw canceled parties for various stars, and this time they may have come up with the flimsiest reason yet—seventeen-year-old singer Billie Eilish turned out not to be a fan of Lady Gaga’s iconic, and infamous, meat dress.

According to stan Twitter, a vegan being less than enthused about couture made entirely of raw meat is a bannable offense, and Eilish should disappear into obscurity as penance for expressing a personal preference. Gaga’s dress was “fashion” and “iconic,” say anti-Eilish fans of the artist, making any criticism of it not just wrong but unacceptable and worthy of full-scale Twitter fury.

hi basic stan. ugh your mind sis. it's fashion and THAT whole dress thing was ICONIC, don't deny. well, what do you expect to billie eyelash who wears oversized shirts and her basic stans call it fashion #billieelishisoverparty pic.twitter.com/IfDj65q22L

Lady Gaga, the second most awarded women alive in music after Beyonce with 304+ awards, has wore a meat dress almost a decade ago. #Vogue loved it, @TheEllenShow most popular tv show loved it, @drake rapper with 181 award winner loved it. Who fuck is she. #BillieEilishIsOverParty pic.twitter.com/PrBNcoR1ev

It’s very true that the meat dress was actually an art-based political statement about the American military’s Don’t Ask, Don’t Tell policy, but as Eilish would have been eight at the time, and much of the media failed to cover that aspect even then, it’s unfair to expect her to know that off the cuff. Plus it’s perfectly valid to criticize art even if you agree with the message. That’s how art works. And plenty of people who supported Gaga’s anti-discrimination point were grossed out at the same time.

I'm a HUGE Lady Gaga fan and I thought the meat dress was yucky too… Lol it doesn't mean you hate or even dislike the person. Everyone has different opinions 🤷#billieelishisoverparty pic.twitter.com/4sgfRscFR0

Gaga did this like 8 years ago. I’m still disgusted. Imagine the smell in the Cali heat. RAW. MEAT. Imagine being mad about the opinions of a 17 year old over a years old publicity stunt. Goodbye #BillieEilishisoverparty for what ?? https://t.co/z0hGz4ch3s

So confused about this #billieelishisoverparty . I mean, I'm a Gaga stan, I don't like Billie, but trying to cancel her for not liking the meat dress, people have different opinions, get over it. Love the meat dress, amazing message, but wearing dead raw meat all over your body

In fact, a lot of Gaga fans came into the hashtag to express disgust over the whole thing, posting out that Eilish is a teenager and Gaga’s “whole thing is kindness,” so she probably wouldn’t be here for the discourse either.

I bet Gaga would be ashamed of her fans acting a goddamn fool over a meat dress. Grow the fuck up, and get some damn sense.#billieelishisoverparty pic.twitter.com/jE1fMxTcX8

Im a little monster through and through and LOVE Gaga but she would be the first to say Bullying Billie is wrong and hateful. Show love and kindness…even though im not an Eilish fan i appreciate her talent and artistry cuz Gaga was once like her too👍 #BillieEilishisoverparty

While some thought this was indicative of a bullying problem among Little Monsters in general.

you do realize it’s extremely disturbing of you to tweet out “this 17 year old is gonna die of an overdose because she doesn’t like my fave’s dress lol.” please do me a favor and go to therapy and talk about this unhealthy parasocial relationship you have with gaga. pic.twitter.com/JwfdZc6UdY

Some pointed out that Eilish has taken a lot of unfair and creepy attacks from both the public and the media already, born out of society’s problems with teenage girls and its need to both sexualize them and deride everything they love.

Hey there how about we don't, once again, abuse and try to defame a 17 year old who just so happens to have an opinion on a dress that is so terrible that it can be used as scientific proof that God doesn't exist. #billieelishisoverparty

I was confused when I saw #billieelishisoverparty trending and y'all are really mad at an actual kid saying she didn't like Gaga's meat dress? pic.twitter.com/sV4PS640gY

I don't know who Billie Eilish is, except that she is a young singer.
What I do know, though, is that she gets a lot of unnecessary grief for very silly reasons. #billieelishisoverparty

Meanwhile, people are getting pretty tired of the constant “[X] is over parties,” started over increasingly petty reasons.

Every time l say someone is over, it’s always some stupid reason… #everywholikedthatdressisoverparty 😂😂😂😂 might as well, also k-pop accounts, stop posting gifs at every “over party” hashtag, 😂😂#billieelishisoverparty

And there’s a large push to turn this into an #onisionisoverparty instead, referring to the YouTuber whose real name is Gregory Jackson and against whom there are multiple accusations of abuse and the grooming of underage girls.

kay how about this:

we change #billieelishisoverparty:
-dumb
-sad
-cancelling a 17 yr old vegan for having an opinion on a fucking meat dress

to #onisionisoverparty:
-justified
-necessary
-hes a groomer
-he shouldve had his platform removed ages ago

#billieelishisoverparty not y'all still making this trending when Onision is literally grooming and fucking kids. but YES OMG Billie not liking a fuckin gross ass meat dress is a WAY more pressing topic. are we also gonna forget about the forest fires in Australia and Brazil or.. pic.twitter.com/AdFGiJVCQH

A hashtag which has now taken off in its own right, though how much of that is traffic diverted from the anti-Billie Eilish hashtag remains unclear.

#billieelishisoverparty
-you didn’t spell it right dumb ass
-she’s 17
-why tf would you even do it anyway over a meAT DRESS#onisionisoverparty instead pic.twitter.com/EX4iRUhwdE