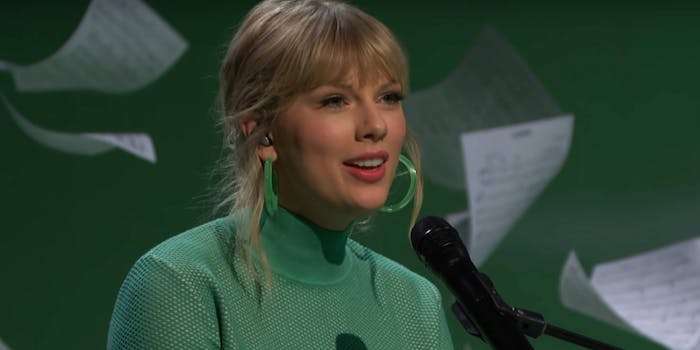 Swift's former label says her claim is 'based on false information.'

Taylor Swift sent out a distress call on Thursday evening regarding the rights to her music, and things quickly got messy.

In a tweet, titled “Don’t know what else to do,” she detailed how the American Music Awards will be honoring her as artist of the decade later this month, but that the sale of her masters to producer Scooter Braun over the summer prohibits her from performing a medley of her songs on the show. She also revealed that Netflix is making a documentary about her, but that Braun and Scott Borchetta, CEO of Big Machine Records, are blocking her from using “my older music or performance footage for this project.”

Don’t know what else to do pic.twitter.com/1uBrXwviTS

Back in July, Swift posted an update to her Tumblr account informing fans that Braun had purchased her masters and that she had no prior knowledge of it. She also called out Borchetta for allowing the sale, though he claimed she was given the option to buy the masters and didn’t. The sale to Braun was seen as a more personal attack, since Swift had previously been the target of “bullying” by his clients, like Kanye West, who put a naked model of Swift in his video for “Famous.”

She settled on re-recording her catalog next year as a way to circumvent the legal mess, but in her missive she claims that Borchetta told her “team” that she’ll be allowed to use her music if she agrees not to re-record old songs and also if she stops “talking about him and Scooter Braun,” though it’s not clear exactly what that means. She also called out the Carlyle Group, a private equity firm that allegedly put up money for the sale.

The part where things spiraled out of control is when Swift asked her massive, devoted fanbase to let Braun and Borchetta “know how you feel about this.” As the #IStandWithTaylor hashtag trended, the alleged phone numbers and home addresses for Braun and Borchetta started popping up on Twitter. According to the Verge, more than a dozen accounts published the alleged info, which is “a direct violation of the Twitter rules,” according to a Twitter spokesperson. Swift also posted to Instagram, and though her post doesn’t violate its guidelines, a spokesperson told the Verge it’s collecting posts that contain Braun and Borchetta’s personal info in an effort to delete other posts with the info.

Big Machine responded to the accusations on Friday, stating: “At no point did we say Taylor could not perform on the AMAs or block her Netflix special. In fact, we do not have the right to keep her from performing live anywhere. Since Taylor’s decision to leave Big Machine last fall, we have continued to honor all of her requests to license her catalog to third parties as she promotes her current record in which we do not financially participate.”

Of course, Big Machine’s statement only says they don’t have the right to stop her from performing live, and doesn’t address whether it’s actually blocking her from performing old songs live. The label called out her decision to “enlist her fanbase in a calculated manner that greatly affects the safety of our employees and their families.” Swift’s PR rep Tree Paine posted a response to Big Machine’s response, stating that in October, the label sent Swift’s team a statement restricting her from using old music in the Netflix documentary and an Alibaba event that took place last weekend.

A Change.org petition has been circulating to put Swift’s music back in her hands, though it’s pretty clear it won’t be that easy.