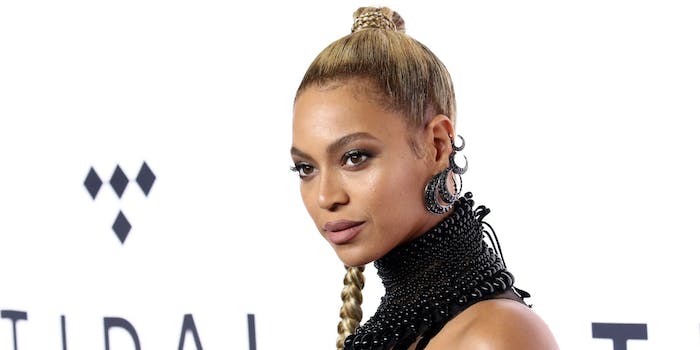 The Beyhive defends Beyoncé for sitting during Joaquin Phoenix’s speech

'The queen don't stand for nobody but the queen.'

There were a lot of big victories at Sunday’s 77th Golden Globe awards.

Joaquin Phoenix, who dazzled audiences with his performance in Joker, took home one of the biggest awards of the night. The role earned 45-year-old Phoenix the award for best actor in a drama motion picture. Fans of the actor were delighted by his victory, except, as some fans noticed, not everyone stood when Phoenix’s name was announced.

Video from the event revealed Beyoncé, who was seated near Phoenix, remaining in her seat as the actor made his way to the podium. Fans of the Joker actor quickly pounced on the news, criticizing Beyoncé for what they considered a disrespectful move. Their criticism did not sit well with the Beyhive, her unofficially dubbed and decentralized online fanbase.

Beyoncé sitting during the standing ovation for Joaquin Phoenix's win is the type of energy I want to see from everyone in 2020 pic.twitter.com/EJD8uq4mHq

After Twitter user Sam Stryker shared an image of a seated Beyoncé surrounded by overjoyed, upright actors, the criticism started flooding in. “I hate everyone thinking being negative is a good personality trait and praising it,” one user wrote.

I sure hope there's a lot of Red Bull available because all she's putting out is bad energy. Beyonce, who is too good to walk in with other celebrities, brought her own champagne, and thinks she's at the top of the A-list LOST. This Bey's honey doesn't seem so sweet. 😕

She petty. U can't win all the time.

Exactly what I thought. She just mad cause she didn't win the nomination and because she wasn't the center of attention.

The Beyhive quickly flocked to its queen’s defense, pushing back on claims that the move was disrespectful. “She’s like ‘the queen dont stand for nobody but the queen’ lmfaoo,” one user wrote.

Beyonce is an amazing artist. But not standing is just plain disrespectful. She even said that she didnt stand bc she thinks she "has more worth" which is so pretentious and egotistical

It's her perogative she chose not to stand why make a big deal of it.

Y’all stay praising the bare minimum where was this energy when Beyoncé worked so hard for 9 months just to have her award being given to a white man who sings in cars? LEAVE HER ALONE.

Many of Beyoncé’s defenders pointed out that her voluminous dress may have contributed to her decision to stay seated. “You can’t wear that parachute she put on and stand up anyhow you might just fly away,” one user joked.

I'd like to think that but what is with the look on her face? :-(

While some users were busy arguing over Beyoncé’s seated position, others instead focused on the content of Phoenix’s speech. They applauded the actor for emphasizing climate change in the wake of Australia’s devastating wildfires, and for calling out some of Hollywood for continuing to live in excess.