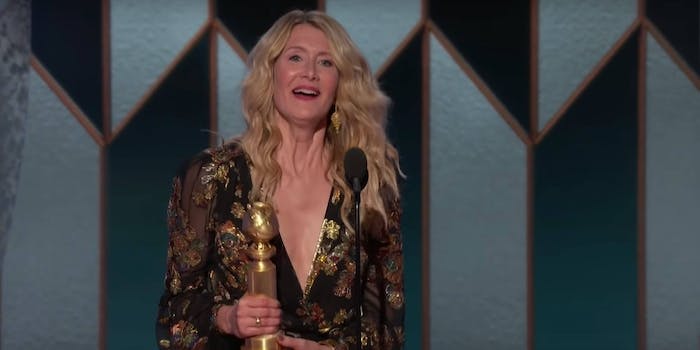 It was another big night for streaming overall, but something of a disappointment for Netflix.

Netflix came into the 2020 Golden Globes with the most nominations out of any network or studio with 34 split evenly among the television and film categories. And while streaming services dominated several of the TV categories, Netflix only walked away with two awards total as Netflix’s biggest awards season hopeful walked away empty-handed.

Those awards, which went to The Crown’s Olivia Colman for best actress in a TV drama and Marriage Story’s Laura Dern for best actress in a supporting role in any motion picture, aren’t anything to snuff about. But its haul is remarkably low considering that Netflix films made up four of the 10 films nominated in a best motion picture category (including three alone in drama) and three of the five nominees for best screenplay. On the TV side, three of the 10 shows nominated for best TV series (including two in the comedy category) were Netflix series while Unbelievable was up for best television limited series or motion picture made for television. And that doesn’t even include the acting nominations across the board.

Netflix has cemented its place on the television side, although it faced tough competition from HBO, which took home four awards: Succession for best TV drama, Chernobyl for best television limited series or motion picture made for television, and two acting awards for Brian Cox and Stellan Skarsgård.

Among other streaming services, Amazon Prime Video’s comedy domination continues as it took home two awards that went to Fleabag and its star Phoebe Waller-Bridge, while Hulu won two Golden Globes for Ramy’s Ramy Youssef and The Act’s Patricia Arquette.

But aside from Dern, every other Golden Globe win went to films released theatrically. 1917, one of two films that wasn’t released by Netflix (and is not yet in wide release), nabbed best motion picture drama and best director for Sam Mendes; the other non-Netflix film in the category, Joker, won two awards for best original score and best lead actor in a drama. Once Upon a Time in Hollywood won three awards, including best motion picture musical or comedy, Brad Pitt for best actor in a supporting role, and Quentin Tarantino for best screenplay. Parasite, Judy’s Renée Zellweger, The Farewell’s Awkawfina, and Rocketman’s Taron Egerton were among the other winners.

Although several of the night’s winners hailed Martin Scorsese, his Netflix film The Irishman (which was up for five awards) didn’t win a single award.

Although the Golden Globes and the Oscars don’t always correlate—for one, the two awards have completely different voting bodies—it might present a bigger problem for the Oscars. The Academy has given Netflix Oscars before, and last year, it ruled that the streaming service could still receive them after a push to make those films ineligible following Roma’s best picture loss failed. But this year is much different for Netflix: Instead of one major film to push, it has several of them, and depending on the category, some of those could easily cancel each other out (especially if a voter isn’t a fan of Netflix itself), which could lead to some unlikely winners from more theatrical films. And while Netflix’s Oscar chances are even greater this year, it might not end up getting the haul it’s going to expect.