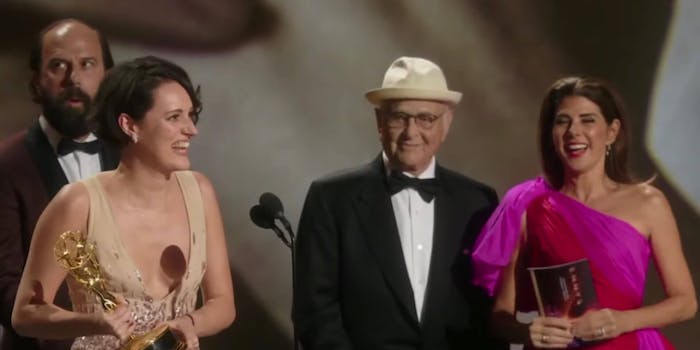 It was 'Mrs. Maisel' and 'Fleabag's night.

HBO might have garnered the most wins at the 2019 Emmys out of any network thanks in large part to Game of Thrones and Chernobyl, but no network dominated an entire section of the primetime ceremony like Amazon Prime.

The first two Emmys of the night went to The Marvelous Mrs. Maisel stars Tony Shalhoub and Alex Borstein in the supporting acting categories. Borstein’s speech in which she thanked her grandmother, a Holocaust survivor, provided one of the Emmys’ early highlights.

Because Mrs. Maisel took the first two awards, it seemed to indicate that it would repeat last year’s grand entrance amid a questionable Emmy campaign. But in the end, it turned out to be Fleabag’s night as the show took four of the five remaining comedy awards.

Phoebe Waller-Bridge, the creator and star of Fleabag, picked up her first award of the night for writing in a comedy series for the season 2 premiere, a category which experts predicted she would win. But nobody was more shocked than her that she won it, joking that the reason why she writes is because of the Emmy.

“It’s just really wonderful to know—and reassuring—that a dirty, pervy, angry, messed-up woman can make it to the Emmys,” she said.

Harry Bradbeer took the next award for directing, where he thanked Waller-Bridge personally for “coming into my life like some kind of glorious grenade.”

“I think, for a director, something like Fleabag only comes along once in your life,” he said. “It was like a perfect storm of support and trust and utter loveliness.”

But Fleabag’s wins kept coming with Waller-Bridge winning a surprise Emmy for lead actress in a comedy, an award that Julia Louis-Dreyfus won six years in a row for Veep (and that Rachel Brosnahan won last year for The Marvelous Mrs. Maisel). And after the telecast awarded Emmys for limited series and TV movie, variety, and most of the drama awards, Fleabag (and Waller-Bridge herself) grabbed one more: outstanding comedy series.

“Oh, this is just getting ridiculous,” Waller-Bridge said after accepting the Emmy for outstanding comedy series—her third win of the night. After explaining Fleabag’s origin story—it started out as a one-woman show at the 2014 Edinburgh Festival—she gave a special thanks to one actor who made the second season so special.

“Season 2 would not have happened or exploded in the way that it did if it wasn’t for Andrew Scott, who came into this, into our Fleabag world, like a whirlwind, and gave a performance of such depth and complexity that just elevated the whole thing for all of us,” she added.

Waller-Bridge has said on multiple occasions, most recently after winning three Emmys, that season 2 of Fleabag would be the last.