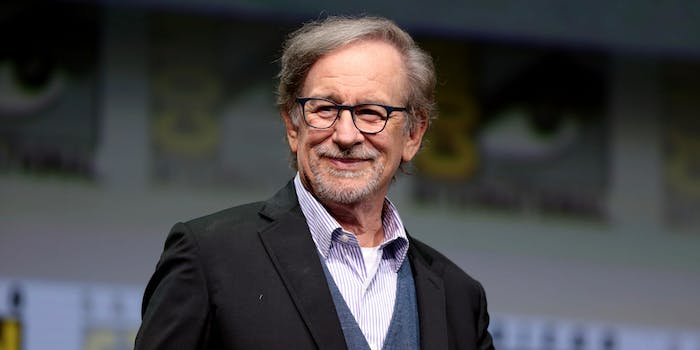 The rivalry heats up.

Roma came out of the Academy Awards with three Oscars but it failed to nab best picture, an award that ultimately went to Green Book. However, Netflix’s apparent near-victory has sparked discussion on the possibility of changing the rules of what movies qualify for Oscars, which is leading to a greater debate about cinematic access.

Netflix has weighed in, too.

According to a recent report from Indiewire, Steven Spielberg—who played a role in getting Green Book to Universal Pictures—wants to propose changes to Academy rules on what films qualify for Oscars during the next Academy Board of Governors meeting in April. Spielberg, who is the Academy governor for the director’s branch, has been vocally against streaming films being considered for Oscars in the past and hopes that others will join him in his opposition.

It’s unclear exactly what rules Spielberg and other streaming critics hope to change. Some of the potential changes, which would include a four-week exclusive box office run and requiring box office totals to be reported are directed toward how Netflix handled Roma’s release and Oscar campaign; the film had a three-week exclusive theatrical release and didn’t report box office totals. Those who took issue with Netflix’s Oscar campaign also complained about its wider availability, how Roma’s release affected other foreign language film distributors, and how much money Netflix may have spent on the campaign itself.

Although the changes are intended as a response to streaming films (and not just Netflix) increasingly starting to compete for Oscars, critics have argued that the proposed rule changes could harm smaller indie films and documentaries with more traditional release plans that would struggle or not be able to fulfill those requirements.

“Awards rules discussions are ongoing with the branches,” the Academy told Indiewire last week. “And the Board will likely consider the topic at the April meeting.”

For now, the rules will remain unchanged. But over the weekend, it’s sparked a much larger debate about films, who is able to make them, and who can access them (and when).

The argument for Netflix is one about access, the streaming giant maintains. With global releases, more people have the ability to watch films that wouldn’t otherwise be released in countries around the world. Advocates have highlighted Netflix’s willingness to give women and people of color the opportunity to write and direct films when other studios wouldn’t take that chance.

It isn’t even about Netflix, though they’re the most visible and least sympathetic target. It’s about every other film and filmmaker who will struggle to get access to the resources necessary to make a film but not get those allowing for a four week exclusive theatrical release. https://t.co/qW4uwbaQ2j

Alfonso Cuarón has argued that without Netflix, Roma—a very personal black-and-white period film that’s in Spanish and Mixtec and features no major film stars—would’ve never gotten the release that it did, even with Cuarón (then a two-time Oscar winner) having made it.

As director Ava DuVernay, who is releasing the limited series When They See Us with Netflix in May, pointed out, the only film of hers that ever received a wide international distribution was 13th, her Netflix documentary. DuVernay is calling for more voices to be heard when the Academy eventually does address concerns about Netflix.

Dear @TheAcademy, This is a Board of Governors meeting. And regular branch members can’t be there. But I hope if this is true, that you’ll have filmmakers in the room or read statements from directors like me who feel differently. Thanks, Ava DuVernay. https://t.co/DFBLVWhiJj

One of the things I value about Netflix is that it distributes black work far/wide. 190 countries will get WHEN THEY SEE US. Here’s a promo for South Africa. I’ve had just one film distributed wide internationally. Not SELMA. Not WRINKLE. It was 13TH. By Netflix. That matters. https://t.co/lpn1FFSfgG

Netflix itself echoed some of those sentiments when it finally spoke up about the streaming versus theatrical debate online late Sunday.

We love cinema. Here are some things we also love:

-Access for people who can't always afford, or live in towns without, theaters
-Letting everyone, everywhere enjoy releases at the same time
-Giving filmmakers more ways to share art

These things are not mutually exclusive.

The debate, however, isn’t black-and-white. Some might agree with Spielberg’s assessment that Netflix movies aren’t really movies or want to change the rules. Some can agree with Spielberg’s sentiment but scoff at the idea of the theatrical experience that Spielberg wants to preserve. And others may be appreciative of what Netflix has done for film access but still have caveats with how Netflix handled its Oscar campaign, not reporting any box office numbers. Netflix has set itself up as an underdog of sorts in this debate, but some are finding it hard to root for an underdog that’s so big that it didn’t pay any federal taxes in 2018.

Netflix will release Martin Scorsese’s The Irishman later this year, which is likely to be another Oscar contender for the streaming service. And although the Academy will discuss potential changes ahead of that film’s release, it likely won’t be the last time streaming services attempting to win Oscars will ruffle feathers.