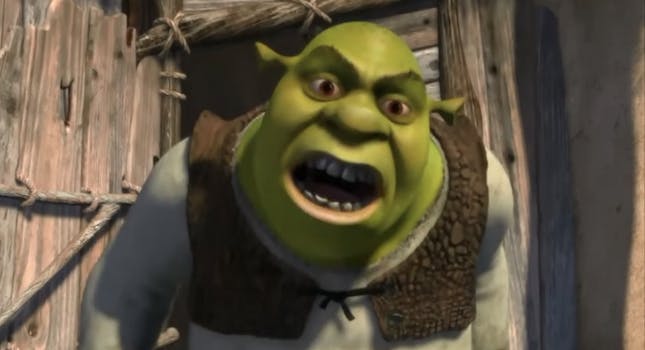 A comprehensive guide to the best Shrek memes on the internet

Shrek is love, Shrek is meme.

William Steig had no idea what he released on the world when he published Shrek! in 1990. The picture book about a green ogre became a Dreamworks hit computer-animated film in 2001, and three sequels followed. There’s also a spinoff prequel, Puss in Boots, a live-action musical, Christmas and Halloween specials, and a theme park ride. Shrek is now a full-blown franchise. And, as with any successful franchise with a strong fanbase, there are memes. Lots of Shrek memes! Here are just a few of the best (and worst) Shrek memes on the internet.

This is a line shouted by Shrek in the first movie when a group of fairytale creatures unexpectedly show up at his door.

It’s not a particularly clever or memorable line, which might be why it sat around unassumingly until 2013. That’s when a musician named Tom M.C. uploaded a techno song featuring the line to Soundcloud. To date, the song has 643,000 plays and gave rise to a number of YouTube videos.

If there’s one thing the Internet loves almost as much as cat videos, it’s creating relationships between fictional characters (otherwise known as shipping). Why Shrek got paired with Shadow the Hedgehog, the dark anti-hero from the Sega game series, is anyone’s guess. It’s the kind of nonsensical, absurdly funny fanfiction pairing that the internet loves.

It seems to have started On Jan. 17, 2010, when an artist going by the name Cmara uploaded a story about Shrek and Shadow to DeviantArt, complete with artwork. The story is about a deep friendship between the two characters. Despite being entitled “Shadow begs Shrek” the author insisted there were no romantic or sexual overtones.

Shrek then began to smile. Tears ran down on Shadow’s cheeks as he said, “I don’t want to lose you because you’re my friend. Because you’re always by my side and because…because…”

While Shrek + Shadow is a harmless, if somewhat cringey, bit of fun, Shrek is love, Shrek is life, is a far more disturbing fan creation. The whole point seems to be to write something as upsetting as possible. If you’re talking about Shrek memes, this one is too big to leave out, but be warned: If you don’t want to read about an ogre having sex with kids, you might want to move along.

Not surprisingly the original story came from 4chan. Here it is in all it’s NSFW glory.

This lead to a number of similar stories being posted to 4chan and beyond, and soon people started creating fan art.

And some kid probably got in a lot of trouble for spray painting the phrase in their school library during senior prank week.

On March 18, 2014, a user named Sykotic created a 3D animation of the original story and uploaded it to YouTube. It accumulated nearly 12 million views, but it has since been deleted.

If you find this whole thing to be extremely messed up and confusing, that just means you get the point.

A “Brogre” just to refers to a, usually adult male, mega Shrek fan. The word itself is a portmanteau of “Bro” and “Ogre” and is probably meant as a parody of “Bronies”, a word used to refer to male fans of the cartoon My Little Pony: Friendship is Magic. In fact, there’s a separate Shrek section on the mlp (my little pony) fan forum site.  It’s a great place to hang out if you say, wanna hear a Shrek remix of “Call Me Maybe” or see some Lord Farquaad puns.

Obviously, the movies were insanely popular, which means a lot of people like Shrek. But these guys take things to a whole new level. For instance, at least two couples have dressed as Shrek and Fiona for their weddings.

Although not exclusively a Shrek meme, the song All Star by Smash Mouth has become so associated with the character that it’s hard to think of one without the other.

The song reached the no. 4 spot on the charts when it was released in 1999 and was featured in the film Mystery Men. However, it really took on a second life when it was used during the title sequence of the first Shrek.

There are countless remixes of the song, each seemingly more bizarre than the last.

The band has taken the meme of the song fairly well. “It’s a fun song to remix and mashup, that’s for sure,” Lead singer Steve Harwell told the Daily Dot back in January of 2017. “The pocket it sits in lends it to work with tons of songs for mashups.” That’s probably why the band got the ball rolling.

According to Harwell, Interscope, the bands’ label when the song was released, commissioned somewhere around ten different remixes at the time. “Our standard answer is, ‘Hey we invented the meme,’” he says. Of course, there’s another reason they might be on board with remixes. “Sales for ‘All Star’ keep very consistent,” Harwell says.

Shrek fans love their wordplay. This one is a combination of Shrek and “rekt”—which is internet slang for “wrecked.” Basically, it’s another way of saying “pwned.”

The meme originated when a YouTube user named Battlecruiser Plays uploaded a video called “SHREKT.WMV”. The video shows some scenes from the first film along with flashing text featuring various internet slang.

From there, is was off to the races with people creating videos using the phrase. Much like getting wrecked, “getting shrekt” can mean anything from getting beaten in a fight to getting high and dancing.

Also known simply as the “Shrek 2 Trumpet Fanfare,” this meme comes from a scene in the second movie where the Grand Inquisitor goes to visit Shrek and Fiona in the Swamp. A group of trumpet players flank the inquisitor as he approaches, playing a fanfare. After the rest of the group stops playing, one man at the end of the line launches into the theme from Hawaii Five-O. He’s then slapped in the back of the head by the inquisitor who says, “Enough Reggie.”

The first known remix of the scene came from a Vine user named Trumpet Guy, who swapped out the Hawaii Five-O theme for Adele’s Hello. Unfortunately, since Vine is now defunct (R.I.P.) that particular video is no longer available. Still, it inspired a large number of YouTube mixes that are still around.

This reaction meme was born on Jan. 7, 2018. Oddly enough, it wasn’t initially a reaction to anything in particular. Twitter user @cooltop just tweeted out the picture of Shrek holding up a camera, surrounded by the text “*SNAP* YEP. THIS ONE’S GOING IN MY CRINGE COMPILATION.”

The caption read: “you can absolutely obliterate anyone in any situation by just sending them this image.”

It was a somewhat popular tweet, receiving over 300 retweets and over 700 likes, but the meme really took off an in May, when a bunch of people used the picture, or a variation, that said “*SNAP* YEP THIS ONE’S GOING IN MY BOOMER COMPILATION” to spam political pundit Bill Mitchell on Twitter.

Whether this was a coordinated effort, or just people organically piling on a trend because they thought it was funny, is unknown. Mitchell assumed it was the work of “#Sorosbots,” implying the replies were coming from bots being paid for by billionaire and liberal political activist George Soros.

This, of course, only encouraged more people to pile on.

The meme can be used anytime someone is doing something you feel is cringe-worthy, although the “Boomer” version seems to be used mainly for Baby Boomers who don’t understand some aspect of modern life.

Theo Karras, or as he will forever be known on the internet, “Shrek Bae,” was just trying to entertain his sister during a car ride. What better way to do so than to reenact Sherk’s first meeting with Donkey? Karras took on both roles and really nailed it.

Karras’ sister recorded the whole thing and posted it to Twitter, where it gained almost 90,000 retweets and over 258,000 likes. Unfortunately, the sister recently made her account private. The video appears to still be available on Know Your Meme. But trust us, it was magical. To make it up to you, here’s a tweet of Karras singing a snippet of “Santa Fe” from Newsies.

The fact that Karras could do a spot-on impression of both Shrek and Donkey made him many people’s ideal man. Of course, it doesn’t hurt that he’s also handsome.

“He always does things like this. I’m surprised by other things I’ve shared hadn’t gone viral yet. We always joked that something he did would eventually turn into something like this,” his sister told the Daily Dot via email back in July.

As for Shrek Bae himself, he did his best to deal with the newfound fame.

Some of these memes have been funny and some have been upsetting. The “Lord Farquaad/Markiplier E,” sometimes known simply as “E,” is just…weird. Although that’s entirely the point. The meme shows video game blogger Markiplier’s face on Lord Farquaad’s head with Mark Zuckerberg’s body. There’s a capital letter “E” at the bottom. It’s meant to be a commentary on the absurdity of meme culture in general. A job at which it succeeds wonderfully.

Lord Farquaad, as you probably know, is the main antagonist of the Shrek universe. Someone apparently thought he looked like Mark Edward Fischbach, aka Markiplier, a well-known video game blogger and YouTube personality. In and of itself that’s nothing particularly noteworty, although the photoshopping is fairly impressive.

On Feb. 15, 2018, someone created a deep-fried version on Tumblr, distorting the image and adding the “E.”

Does the “E” mean anything specific? Probably not. Deep-fried memes are meant to be surreal and absurd. If there is any deeper meaning, it’s one the artist didn’t mention.

On April 13, 2018, a Reddit user created the version where the head is placed on the body of Mark Zuckerberg as he testifies before Congress.

The meme is often used as an example of just how bizarre memes have become.

A screengrab of Shrek raising his eyebrows and looking off to one side has become a popular reaction meme. It’s known most often as Bored Shrek or Surprised Shrek, depending on the use.

When the news hit that both Shrek and Puss in Boots would be getting subsequent releases, fans were ecstatic. The film reportedly could touch on Shrek’s origins, and people began dreaming up their own movie posters and making memes about what a fifth Shrek film could look like.

However, as of Jan. 2021, Shrek 5 doesn’t have an official release date, and the plot has not been confirmed. It is currently scheduled to be released sometime in 2022.

The popularity of Shrek memes

All these memes are just the tip of the Iceberg. With so many characters and such a huge impact on popular culture, the Shrek universe is a nearly limitless source for meme creation.

The big green ogre will probably never wrestle the meme crown around from the king of all memes, SpongeBob Squarepants,  but he’s definitely a strong contender for second place.