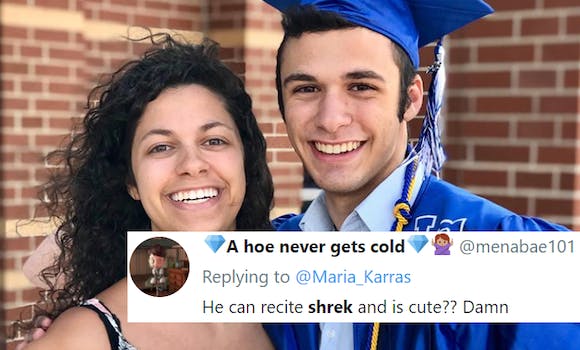 The responses to the viral video were 'ogre'-whelming.

Twitter users went heads “ogre” heels for 18-year-old Theo Karras after his sister Maria posted a video of him reciting a scene from the American classic film Shrek.

Stuck in the car for 2 hours with this pic.twitter.com/nlLb0a1FtG

The video, which currently boasts over 2 million views, showed Theo’s rendition of Shrek and Donkey’s meeting scene and featured his impressive singing and accent skills. Maria told the Daily Dot that he started doing the impressions out of sheer boredom while on a car ride back from a family camping trip.

What’s the point in having a relationship if your SO can’t word for word recite shREK???? Actual dream. Shook. Added to the dream boi list. https://t.co/a78JxdmAi3

The siblings had no idea the video would blow up. “He keeps calling me and texting me ‘WHAT IS GOING IN RIGHT NOW,’” Maria said via Twitter DM. “It’s still hard to believe.”

They initially planned to send the video to their Snapchat group chat with their 11 cousins but posted it on Twitter instead since it was too long, Maria told BuzzFeed.

Expectation: becoming known by making it big on Broadway.

Reality: becoming a meme because I recited Shrek…

“He always does things like this. I’m surprised other things I’ve shared hadn’t gone viral yet. We always joked that something he did would eventually turn into something like this,” Maria told the Daily Dot.

Theo told BuzzFeed that he has been impersonating scenes and characters from Shrek since he was young—and that he has it memorized from seeing the movie so many times.

Someone get this man his well deserved Tony https://t.co/JglvJYIGJ3

Theo told the Daily Dot he’s been involved in theater for eight years and plans to pursue a college degree in drama or musical theater. He also wants to start a YouTube video and connect with all of his new followers.

“With all of this attention I have gained I have honestly been quite overwhelmed. But on the other hand I’m super flattered by all the love,” he said.