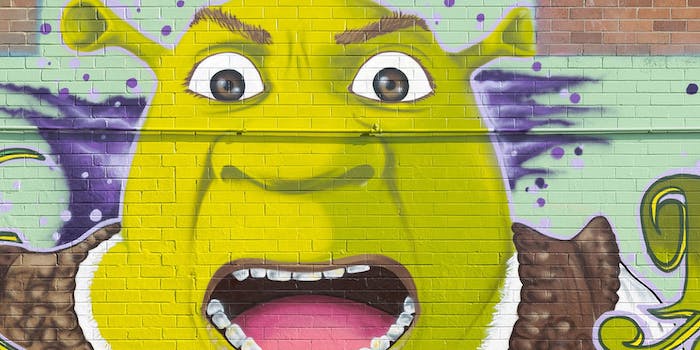 Behind the internet’s freakish obsession with Shrek

Shrek is love. Shrek is life.

The video clip opens with a boy kneeling beside his bed in prayer. It’s not to God, but to Shrek, the world’s most popular ogre. “Shrek is love,” the boy mutters. “Shrek is life.”

No, it’s not some sick new spinoff of the blockbuster DreamWorks franchise. It’s the latest fanmade addition to the the internet’s bizarre and ongoing obsession with Shrek.

In the clip, the boy’s father overhears his prayer. He calls the boy a homophobic slur. The boy retaliates, and his dad slaps him. He cries himself to sleep. Sometime during the night, he’s woken up by Shrek himself. The ogre whispers in the boy’s ear, “This is my swamp.”

It gets much weirder—and more NSFW—from there. It ends with Shrek saying, “It’s all ogre now,” before flying out the bedroom window. The phrase “Shrek is love. Shrek is life” appears on the screen over some melancholy piano music.

Shrek was released in 2001. Fans flocked to deviantART to post their original comics and illustrations. But it took about 11 years for the internet’s Shrek obsession to go from cute to cult-like.

Dec. 1, 2009, holds a particular significance in Shrek’s internet history. That’s when DreamWorks launched its official Facebook page for the series—a place for the studio to promote Shrek products and spinoffs. It was also a place where DreamWorks had Shrek occasionally speak to his fans through cute first-person posts.

These posts were a big hit on Facebook. The number of likes each one received was 1,000 to 2,000 more than the average promotional post. What DreamWorks may not have realized was that this sort of creativity—the removal of Shrek from the confines of its films—is exactly what fans had been doing well before they launched its Facebook page.

“In my opinion, it’s a subversion of brony culture, again taking something relatively childish with good intentions and flipping it to an ironic appreciation,” said Amanda Brennan, a former researcher for Know Your Meme and Tumblr staffer.

With the Shrek meme thoroughly established thanks to deviantART and ShrekChan, 4chan took it to a whole new demented level in 2013.

The “Shrek Is Love, Shrek Is Life” metameme was a meme built on top of an existing meme. As illustrated in the video clip mentioned earlier, it tells the story of a Shrek-obsessed boy who is disturbed by the green ogre in his sleep. (Warning: NSFW.)

All of this new attention has resulted in a rise in popularity on Google trends.

She points out that while the phrase “Shrek is love” is “on the upswing, comparing it to a search for just ‘Shrek” flattens the [Google trends] graph.” Meaning all the online appreciation for Shrek barely factors into his mainstream popularity.

The meme may live forever underground.

Since it peaked in late 2014, the cult of the “Shrek is love, Shrek is life” meme has gradually faded from the internet. There are still some active “brogres,” but a look at the Google Trends graph for “Shrek is love” would seem back up our prediction that “the meme will live forever underground.” Emphasis on the “underground” part.

To understand the decline of Shrek’s role as an internet religion since 2014, the Daily Dot contacted Martin Gyiran, the admin of what might be the last active Shrek Is Love Facebook page.

“Since 2014 October there is no ‘big’ Shrek is Love stuff,” he said. “It’s mostly memes (nowadays dank memes) and hard to find Shrek is Love related content.”

While Google searches for Shrek Is Love were dropping off a cliff, Shrek memes continued to grow, slowly and gradually. There’s enough material that Gyiran still posts Shrek memes regularly, farming them from 4chan and Tumblr. Most of them are totally unrelated to the cult of Shrek, but new trends have taken its place.

“Recent Shrek memes are usually the Shrek versions of trending memes so it will continue in that direction,” Gyiran predicted.

“People forgot what ‘Shrek is love Shrek is life,’ is. They only see these [trending] memes and Smash Mouth – All Star becoming a thing,” he added.

It seems that Shrek’s most lasting contribution to the meme world was its opening song, Smash Mouth’s chart-topper “All Star.” The band told the Daily Dot last year that they don’t love the memes about their song, but its lasting internet appeal has certainly been good for their income.

The prognosis for Shrek memes is that they’ll never really die, just keep going along at the same low hum as they’re remixed with the latest meme trends.

“In the past few months there are several new Shrek memes, and it’s easier to find them,” he said.

Shrek is no longer life, but it’s still a viable meme commodity.