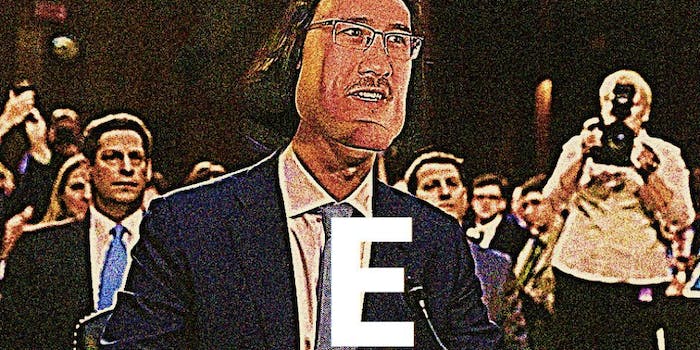 The ‘E’ meme shows just how weird memes can get

Farquazucciplier is a mix of several memes. But what's the joke?

Internet memes are a thriving new medium, but they’re also a secret language of inside jokes and references shared by teens and 20-somethings. To the uninitiated, they can be completely inscrutable. Without layer upon layer of context gleaned from participating in online communities, there’s no hope of getting the joke. And no 2018 meme drives this point home better than the E meme. Just look at it!

What is the E meme?

What we have here is a distorted combination of three different images. The hair and part of the facial structure belong to Lord Farquaad, the villain from Shrek:

The face and glasses belong to popular gaming YouTuber Markiplier:

Finally, the body and background are borrowed from Facebook founder Mark Zuckerberg’s recent testimony before Congress.

The whole franken-image is then “deep-fried“—hit with a bunch of Photoshop distortion and graininess—and emblazoned with the caption “E.” What does it all mean? Truly, nothing—and that’s what makes it great. Let’s investigate!

According to Know Your Meme, the mashup of Markiplier and Farquaad first appeared on Twitter in 2015.

At the time, combining a popular YouTube personality with a character from Shrek was entirely in keeping with meme trends. A “Shrek is Love, Shrek is Life” trend swept the internet in 2014, and “Shrek Wazowski,” a popular Photoshop mashup of Shrek and Mike Wazowski from Monsters, Inc., also appeared around that time.

But the “E” and the visual distortion didn’t appear until February 2018, on the deep-fried meme tumblr “photo-frier“:

With a heap of visual distortion and a weird, non-sequitur caption, a meme from 2015 had suddenly become an emblem of the surreal, “random” meme style that’s becoming prevalent in 2018.

The “Farquazucciplier” became extremely popular on the r/deepfriedmemes subreddit, making it to Reddit’s “r/all” front page. Non-meme-savvy posters who saw it commented that they were “so confused” and didn’t get the joke. That’s fine, though, because there’s nothing to get. It’s just … weird.

The image was soon used in commentary about contemporary memes. Posters compared the highly legible memes of yesteryear, centered around simple punchlines and stock characters, to the dadaist memes of today:

Now, mentions of “E” are dropping into unrelated posts, and people are wondering what it means. Multiple posts on Reddit’s Q&A forum r/outoftheloop inquired about “E,” and the answers were pretty consistent: the joke is the total lack of meaning.

“The fact that this is a joke is the joke, it’s meant to be absurd,” one poster wrote.

“The E is representative of how memes are becoming so self-referential that something inherently meaningless, such as a simple capital E, can be given value as a meme simply by being used as a meme. E is a transcended meme. It has no inherent meaning other than its face value, but within the context of meme culture it’s been given an application,” another added.

It’s been clear for some time that memes have been getting weirder. These “transcended memes” are a fascinating, extremely 2018 direction for meme culture to take.

2008 me: Jesus christ… so it's… The future is a straight-up dystopia?
2018 me: yeah but check this out I've put one of your memes next to ours and I have to say the memes have gotten a lot better pic.twitter.com/YrA2OX8uK9

It’s not clear where they can go from here, though. Other media, including fine art, film, and literature, have gone through long phases of postmodern absurdity, but their examples don’t offer much help in explaining meme culture. For one thing, memes are a young medium that has yet to be fully exploited by commercial interests. For another, these other, more mature cultural forms are still actively grappling with the question of what comes after postmodernism.

For right now, though, we’re just going to stop and lose our minds laughing at “E.”