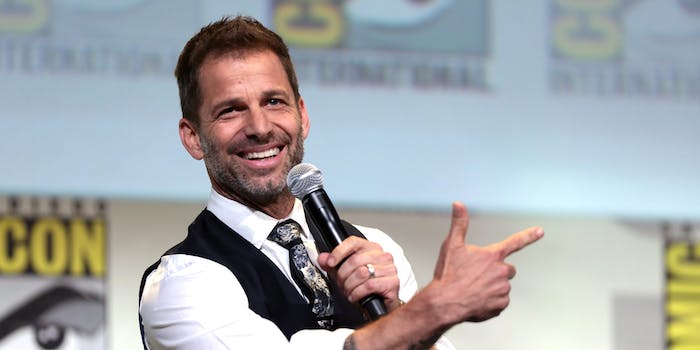 If you thought the Snyder Cut campaign would end once the film came out, think again. One week out from the HBO Max release of Zack Snyder’s Justice League, #RestoreTheSnyderVerse is trending on Twitter as part of an ongoing campaign for Snyder to make more DC Comics movies.

Unlike the Marvel Cinematic Universe, which has been a tightly controlled entity for over a decade, Warner Bros.’ DC Extended Universe (DCEU) is somewhat chaotic. Kicking off with Snyder’s Man of Steel in 2013, the initial phase introduced a new Justice League including Batman and Superman. Suicide Squad was the first spinoff, introducing the Joker and Harley Quinn in 2016.

Since then, the DCEU has gone in new directions. Wonder Woman acted as a standalone film, as did Aquaman and Shazam! Meanwhile, Birds of Prey felt like a soft reboot after Suicide Squad, which will soon receive a full reboot from a different director. Joker starred Joaquin Phoenix instead of Suicide Squad‘s Jared Leto, and Ben Affleck’s Batman has now been replaced by Robert Pattinson.

Warner Bros. is reputedly planning to tie some strands together in the upcoming Flash movie, which will involve a multiverse concept—in other words, a canon explanation for all these rebooted timelines. But any way you look at it, the original “SnyderVerse” franchise is over. Warner Bros. has moved on. And Snyder’s fans aren’t happy about it.

The concept of a SnyderVerse isn’t really on mainstream viewers’ radars, but Snyder’s fan base is very vocal. Snyder has spoken extensively about ideas he had for Justice League sequels and spinoffs, and his fans want to see those ideas come to life. But will this campaign achieve another Snyder Cut-style victory? Probably not.

Warner Bros. spent an astounding $70 million on completing Zack Snyder’s Justice League, suggesting that the studio wants to keep Snyder on its side. But his days as the DCEU’s guiding force are over. Snyder himself admits that his cut of Justice League isn’t canon. And with films like Wonder Woman and Joker performing better at the box office than Snyder’s own films, Warner Bros. is unlikely to retool its entire gameplan to make a few fans happy.

The most likely outcome of #RestoreTheSnyderVerse is that Snyder Cut campaigns will continue to be an inescapable part of DC fandom. Some fans are already sharing conspiracy theories about HBO Max’s accidental Snyder Cut leak this week, blaming it on “sabotage.” This paves the way for a potential future where Justice League once again fails to attract mainstream audiences, and fans shift the blame onto someone other than Snyder himself.