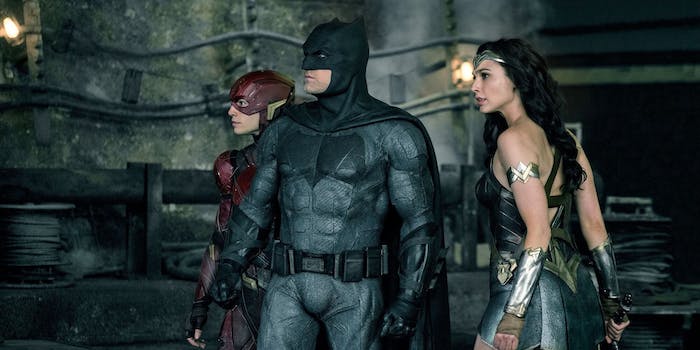 After three years of people saying that the Snyder Cut definitely exists and that they’ve actually seen it, it turns out the situation is more complicated than many fans believe.

While the director’s cut of Justice League will indeed be released (an announcement conveniently timed to promote the launch of HBO Max), there’s a reason why you’ll have to wait until 2021.

Speaking to the Recode Media podcast, WarnerMedia chairman Bob Greenblatt said the Snyder Cut was nowhere near finished and would be much more expensive than the $20-30 million ballpark number that was previously mentioned in media coverage.

“It isn’t as easy as just going into the vault and there’s a Snyder Cut sitting there to put out,” he explained. “It does not exist. Zack is actually building it.”

When people like Kevin Smith and Jason Momoa talk about watching or hearing about an “original” version of the Snyder Cut, they’re talking about an early edit with unfinished visual effects. It’s a normal part of the post-production process, which is why you often hear about “a four-hour cut” of a popular movie. But that rarely translates to a watchable extended edition like Lord of the Rings. It’s just a rough guideline for editing a film that’s meant to be half as long.

Plenty of Snyder Cut aficionados know enough about the film industry to understand this, but if you’re not following the campaign closely, you might be under the impression that Warner Bros. can just edit a few deleted scenes together and call it a day. They can’t.

In the same interview, Greenblatt described the Snyder Cut (or rather Zack Snyder’s Justice League, as it’s officially titled on HBO Max) as a “radical rethinking of that movie.” It’s a “complicated and wildly expensive” undertaking that required WarnerMedia to get in touch with unions involved with the original film and figure out whether legally this counted as a different movie altogether.

When the interviewer asked about the $30 million figure for new visual effects shots and editing, Greenblatt laughed and said, “I wish it was just $30 million.” The theatrical version of Justice League cost $300 million to make (a stunningly high figure; more than Avatar) and did not turn a profit.

The purpose of the Snyder Cut is to bring back Zack Snyder’s original vision, from before he left the project due to a family crisis, and before Joss Whedon rewrote, reshot, and re-edited significant portions of the film. Snyder and the cast have mentioned numerous deleted scenes, including much of Superman’s role (famously reshot with Henry Cavill’s Mission Impossible moustache), unseen backstories for main characters like Cyborg, and a different final battle sequence.

And crucially, this was all unfinished. Not just in the sense that it requires more CGI effects, but it’s likely to have needed further reshoots. The reason why Whedon reshot so much material was because Warner Bros. disliked the original product, deeming an early cut to be “unwatchable.” So even if Zack Snyder had stuck around, he probably would’ve had to shoot new material himself.

Snyder allegedly wanted to arrange new reshoots with the Justice League cast, but HBO refused––although this comes from an outside source, not WarnerMedia directly. The Snyder Cut’s budget is expected to cover visual effects, editing, scoring, and possibly some new audio recorded by the actors. To give you some financial context here, these post-production costs are more expensive than the entirety of the first John Wick movie. It’s hard to see how it can make a profit, unless HBO Max is genuinely expecting millions of new subscribers to sign up just for the Snyder Cut.