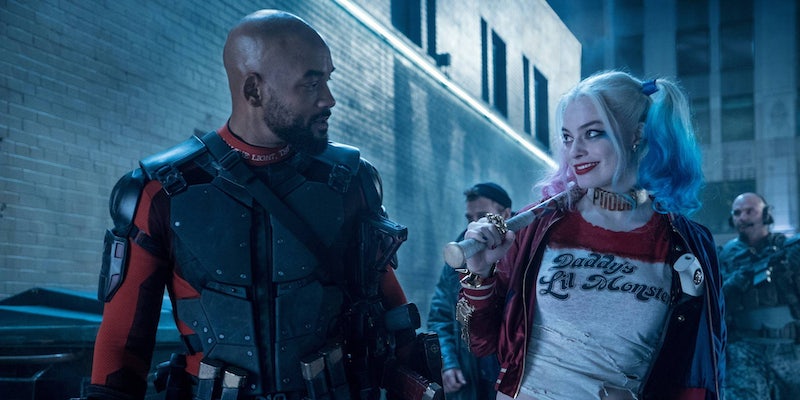 ‘Suicide Squad’ fails to live up to the edgy, entertaining hype

'Suicide Squad' was meant to be a fun antidote to wholesome superheroes, but instead it's painfully dull.

There are nine people in the main Suicide Squad team, and that’s about six too many for a film where almost everything is either unnecessary or disappointing, failing to live up to the hype of an edgy, stylish antidote to superheroism.

Recruited by the ruthless Amanda Waller (Viola Davis, working several grades above the quality of her material), the Suicide Squad is a team of supervillains coerced into fighting “metahuman threats” for the U.S. government. It’s a fitting premise for the cynical world of Batman v Superman, but falls at the first hurdle because there’s no reason for most of these characters to be there in the first place.

It makes sense for Waller to recruit the assassin Deadshot (Will Smith, who I suspect rewrote a lot of his dialogue), the flammable convict El Diablo (Jay Hernandez), and the ancient witch-demon Enchantress (Cara Delevingne), but what do the others bring to the table? Harley Quinn (Margot Robbie) is volatile and unreliable, her combat skills are limited to a handgun and a baseball bat, and her presence is a magnet for attacks from the Joker. Suicide Squad is so poorly written, we don’t even get a lazy explanation for why Waller breaks her out of jail.

As for Killer Croc (moderate super-strength and a bad skin condition), Captain Boomerang (boomerangs) and Katana (who has a magical katana), they’re hardly a match for the government’s paranoid vision of a “terrorist Superman.” They should have just stuck with a team of Navy SEALs and an emergency line to Batman. 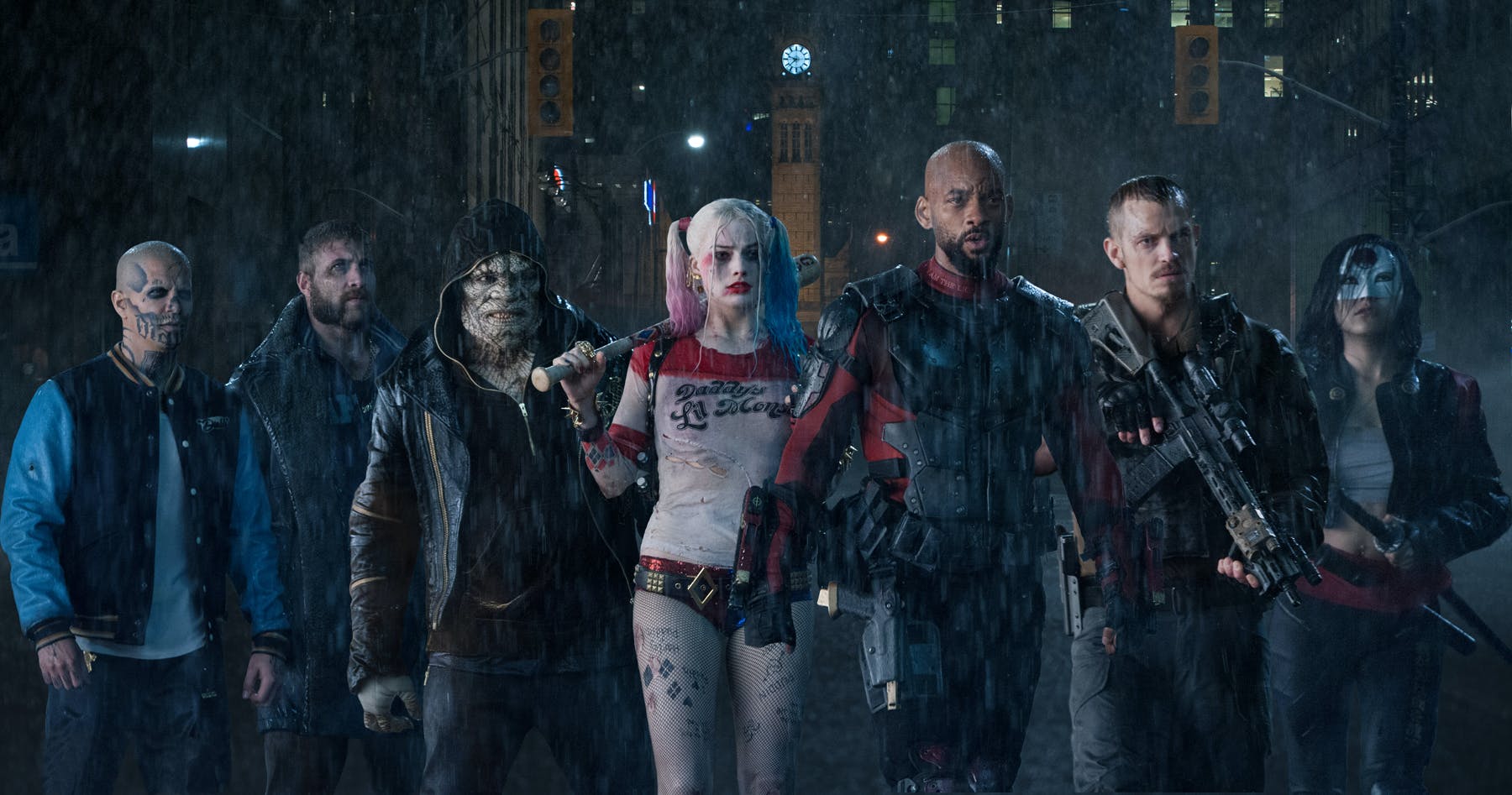 Writer/director David Ayer reportedly penned the script in six weeks, which is painfully obvious from the horrible dialogue, weak characterization, and threadbare plot. The first hour is dedicated to introducing everyone, with Viola Davis providing an explanatory voiceover like she’s reading each character’s stats off a trading card. The second half is a meandering rescue mission with poorly shot action scenes, leading toward the biggest cliché of the superhero genre: a villain who opens some kind of CGI portal, protected by an army of faceless drones.

Suicide Squad was marketed as a refreshing departure from the wholesomeness of Marvel and the misery of DC’s last two movies, starring a team of bad-to-the-bone villains who know how to have fun. It ended up being none of those things. While Deadpool reveled in its violence and adolescent humor, Suicide Squad is weirdly slow-moving and downbeat. You’ve already seen all the comedic moments in the trailers, and Harley Quinn is the only character who feels rebellious or fun. There’s barely any contrast between the angry, violent Deadshot and the team’s angry, violent military liaison Rick Flag (Joel Kinnamon), a man so bland and unlikable that it’s easy to forget he’s one of the lead characters. 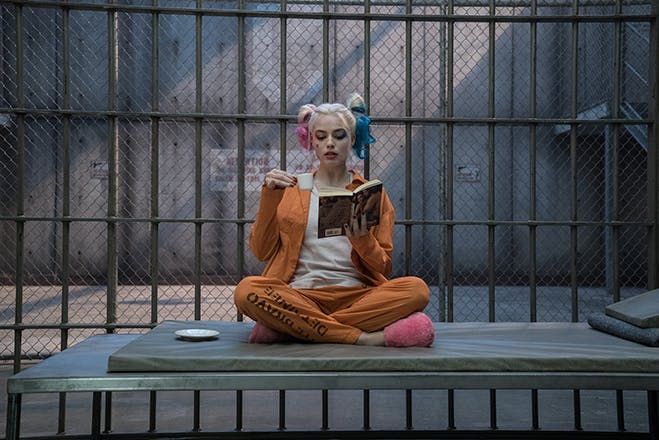 Honestly, Robbie deserves some kind of award for putting up with all this. Her performance rescues some stunningly bad dialogue (“Normal is just a setting on a dryer,” she says at one point, channeling a tween Myspace page from 2002), and she somehow portrays a sympathetic version of Harley Quinn despite the cloud of sexism threatening to engulf her at any moment.

Kate Hawley’s costume design is easily the best part of the film, adding a splash of color and originality to a story that mostly takes place in prisons and urban battle scenes, but there’s no denying that Harley, in her inexplicable spike heels and booty shorts, is wildly oversexualized. David Ayer can barely get through a scene without panning the camera over her butt.

Suicide Squad was touted for its diverse cast and wide(ish) range of female characters, but casting is only the first step in avoiding racist and sexist subtext. El Diablo, the only Latino superhero/villain in Hollywood, is a tattooed gangster who murdered his wife and kids. The tokenistic Katana is about as three-dimensional as a Street Fighter avatar. And Cara Delevingne’s role is mesmerizingly bad: an archaeologist possessed by an ancient entity with a vaguely Central American aesthetic, who speaks with a booming Downton Abbey accent and activates an apocalypse machine by belly-dancing in some kind of slinky bikini dress. 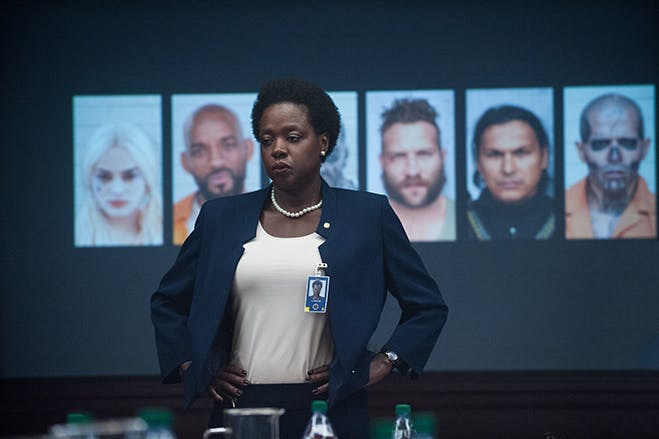 The tough-as-nails Amanda Waller is the film’s one saving grace in this regard, as a powerful black woman whose role echoes Nick Fury in the Marvel franchise. Unfortunately, any feminist impact is undercut by Ayer’s clumsy and misogynist take on Harley Quinn. Harley is a tricky character to write at the best of times, simultaneously infantilized and sexualized, and locked into an abusive relationship with the Joker. Ayer has her flirting with prison guards and go-go dancing for the Joker’s criminal rivals, culminating in the revelation that her heart’s desire is to have a wholesome suburban marriage with Mr. J, complete with two blond babies and Jared Leto in a boring business suit. What on Earth?

After enduring a full year of hype for Leto’s Joker, the payoff is a huge disappointment. Leto infamously sent dead animals and used condoms to his co-stars in an attempt to get into the Joker’s head, but these antics yielded unimpressive results. This version of the Joker is just a gangster with green hair, showcasing an almost impressive lack of imagination. Aside from meaningless quirks like writing “HA! HA! HA!” on his hotel room walls, he never strays beyond the generic violence of a TV crime boss. This mediocrity becomes even more embarrassing when compared to Harley Quinn, which only serves to weaken her role because he’s such a bafflingly unappealing choice of boyfriend.

With the overall tone of a rush job executed without imagination, Suicide Squad fails in its mission to stand out from other comic book movies. The antiheroes aren’t fun like Deadpool or darkly sympathetic like Wolverine, and the plot is formulaic. The only hint of originality is the neon-hued Hot Topic aesthetic, which, while weirdly refreshing, vanishes by the second half of the film. Even the soundtrack, which seemed so stylish in the trailers, feels phony compared to the fun retro music cues of Guardians of the Galaxy or Star Trek Beyond.

The best-case scenario here is that Robbie escapes to a solo Harley Quinn franchise—preferably directed by a woman, and with minimal input from the tiresome Leto.