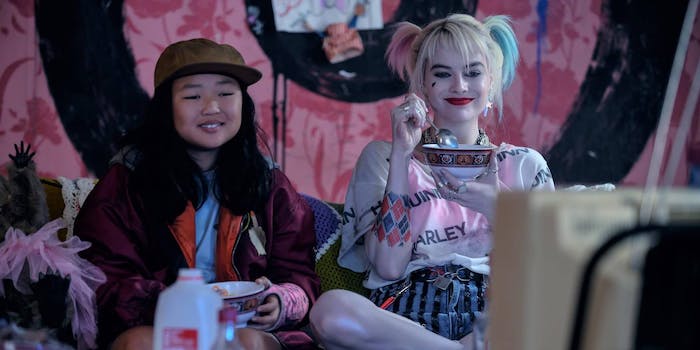 Margot Robbie returns as Harley Quinn in Birds of Prey, a spinoff/sequel that requires no knowledge of its mediocre predecessor, Suicide Squad. Thank goodness. Like the recent Harley Quinn animated series, it begins with her breaking up with (or in this case, being dumped by) her shitty boyfriend, the Joker. After spending years in an abusive relationship, it’s time to strike out on her own—something that Harley immediately screws up, because she’s a total chaos-magnet.

RELEASE DATE: 2/07/2020
DIRECTOR: Cathy Yan
RELEASE: Theatrical
Margot Robbie’s Harley Quinn finally gets her due in this stylish crime caper, pivoting to an all-female team after the disappointing ‘Suicide Squad’ movie. It’s not exactly deep, but the action scenes are worth the price of admission.

Directed by Cathy Yan and written by Christina Hodson, Birds of Prey is an ideal fit for Harley Quinn: fun, glitzy, and uninterested in redeeming its heroine. The whole point of Harley is that she’s a mess. She makes self-destructive choices, and even in a live-action movie for adults, she has the moral and aesthetic instincts of a cartoon villain. Rather than being a role model, she’s a self-indulgent fantasy—an archetype you rarely see for female characters. Harley is violent and petty and ruled by comically extreme mood-swings, but most importantly, she’s fun. That’s why Margot Robbie was the runaway star of Suicide Squad, and why Birds of Prey is sure to satisfy her fans —even if it’s a rather shallow concept compared to some recent superhero movies. DC Universe’s Harley Quinn cartoon covered similar territory in a more thoughtful way, but Birds of Prey serves perfectly well as a kind of cross between Deadpool and a Lady Gaga video, featuring flashy costumes and well-choreographed fight scenes.

Set in Gotham City, Birds of Prey is (of course) a crime thriller. Following her breakup with the Joker, Harley gets embroiled in a hunt for a priceless diamond, spearheaded by the sadistic mob boss Roman Sionis (Ewan McGregor). Told in non-chronological order, a conceit that adds nothing except an opportunity for more zany voiceovers, this is basically a “getting the gang together” story for the Birds of Prey team. Renee Montoya (Rosie Perez) is a police detective investigating Sionis. Black Canary (Jurnee Smollett-Bell) is a singer at one of Sionis’s clubs. Huntress (Mary Elizabeth Winstead) is a crossbow-wielding parody of dour action-hero tropes, and Cassandra Cain (Ella Jay Basco) is a teen pickpocket.

Birds of Prey exists on the same continuum as Guardians of the Galaxy and Deadpool: quirky but simple action-comedies with a morally ambiguous cast. I found the Reddit-flavored protagonists and constant pop culture references exhausting in Guardians and Deadpool, so, by comparison, I enjoyed this film a lot more. But that’s really a taste thing. As a candy-colored adventure hinging on Robbie’s cartoonish-yet-sincere performance, Birds of Prey holds much of the same appeal.

Costume designer Erin Benach (A Star is Born; The Neon Demon) makes everyone look extremely cool, retooling Harley’s sexy clown aesthetic to feel more fun-loving and personal than in Suicide Squad, which catered directly to the horny male gaze. We get a satisfying range of styles from the normal-looking Renee and Cassandra, to Harley’s magpie instincts, Black Canary’s chic clubwear, and Huntress’s butch twist on midriff-bearing superheroine costumes. In terms of production design, Cathy Yan’s version of Gotham City is a little less weird than I’d hope, mostly resembling contemporary New York. The real visual draw is the action sequences. Cinematographer Matthew Libatique shot the first two Iron Man movies, but he’s better known for his collaborations with Darren Aaronofsky, working on films like Black Swan and Requiem for a Dream. He and Yan have wonderfully smooth way of exploring hand-to-hand combat scenes, outshining the trend for choppy editing in many superhero movies. You’ll notice some of it in this brief clip, but my favorite moment was when Harley obliterated a squad of goons with a baseball bat, a scene that positively screamed “Margot Robbie is doing her own stunts!” Fight scenes look better when you can actually see and appreciate what’s going on; who knew?

Both Birds of Prey and the Harley Quinn cartoon follow the same arc for Harley, starting off with her pining for the Joker before realizing she’s happier hanging out with her girlfriends. The difference is that the show gets over the breakup section within the first act of a 10-episode series, while the Joker’s influence looms over much of Birds of Prey. The whole thing is a breakup movie, like a rebellious riff on Legally Blonde. While there’s nothing wrong with that, it did make me wonder when we’ll see a female-led superhero movie that doesn’t focus on women defeating sexist men. It’s right there in the title: Birds of Prey (and the Fantabulous Emancipation of One Harley Quinn). Harley needs to emancipate herself, as do Renee Montoya (disrespected by her male coworkers) and Black Canary (controlled by her abusive boss), the two other heroes with the most screentime.

Wonder Woman, Captain Marvel and Birds of Prey are all female empowerment stories, all resonating in different ways. Diana of Themiscyra stars in a wish-fulfilment narrative about a demigod raised in an all-female utopia, Carol Danvers overcomes institutional sexism to thrive in a man’s world, and Harley Quinn extracts herself from an abusive relationship to form a girl-gang and fight a misogynist crime boss. All worthwhile ideas! But I can’t help but hope for a female-led superhero movie with less screentime devoted to everyday sexism, for the obvious reason that their male counterparts don’t have to bother. They can just forge ahead with their own quests, while women’s stories are at least partly defined by a struggle to rise above a male-dominated culture. It’s a complicated issue because unless a film takes place in a fantasy world with total gender equality (something Thor and Guardians of the Galaxy could’ve done, but didn’t), of course powerful women have to deal with a barrage of sexism during their journey to success. I just wish that along with the depictions of cool ladies destroying terrible men, we also got more female-centric stories that worked on the same level as Iron Man or Thor.

On the topic of terrible men, Ewan McGregor’s Roman Sionis is likely to be divisive. On the one hand, he’s a pleasingly hateable foil for Harley Quinn: a glamorous creep who explodes into childish tantrums when he doesn’t get his way. On the other hand, he’s an extravagantly blatant example of queer-coded villainhood, to the point where it’s not really coded at all. Sionis is clearly gay, and he’s in a relationship with his obsessively loyal henchman Victor Zsasz (Chris Messina), who mutilates people while Sionis grimaces theatrically in the background. He’s basically Serial Killer Liberace. So depending on your outlook, he’s either an appropriate choice for Harley’s brand of campy cartoon hijinks… or this is all a big Yikes in the context of other superhero movies, where positive queer representation is either virtually nonexistent or restricted to R-rated films. One of Birds of Prey’s heroes, Renee Montoya, is a lesbian, which kind of balances things out. But the reference to her sexuality is brief enough that I almost missed it, whereas Roman Sionis is the centerfold for Evil Gays Monthly. Harley’s brand is all about reclaiming and subverting problematic depictions of gender, sexuality and villainhood, but I’m not sure Hollywood has reached the point where Warner Bros. can confidently unveil a queer supervillain whose main hobbies are torture, collecting racist antiques, and killing women to steal their jewels.

With Avengers: Endgame out of the way, it’s hopefully time for a shake-up in the superhero genre. 2020’s four big releases (Birds of Prey, Black Widow, Wonder Woman 2 and The Eternals) are all directed by women, which should bring some fresh perspectives after the reign of Zack Snyder and the Russo Brothers. Two of the four are also offbeat team movies, with Birds of Prey easing us into the year with an energetic crime caper. It probably won’t stick with me in any meaningful way, but the soundtrack is killer, and Margot Robbie’s Harley Quinn finally gets her due.

Birds of Prey comes out on Feb. 7.