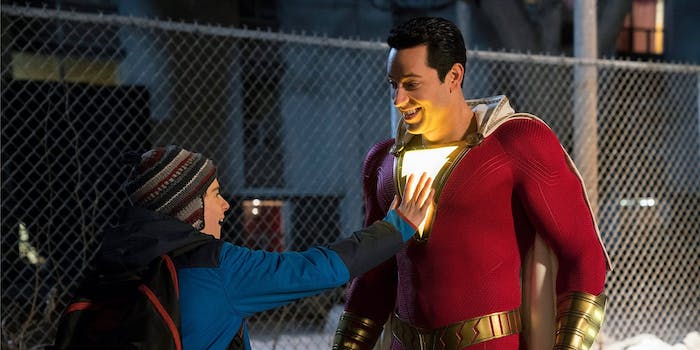 ‘Shazam!’ embraces the spectacle and heart of the superhero genre

DC Comics' latest film has a ton of heart.

Shazam! wears its heart unabashedly on the sleeve of its hero’s over-the-top superhero suit and embraces some of the sillier aspects of the genre. And although that journey of self-discovery gets repetitive at times, it culminates in a fun and kid-friendly debut for DC Comics’ latest hero—and an even better story about found family.

Billy Batson, a 14-year-old foster kid, gains the powers of an ancient wizard and can turn into an adult superhero by saying the name Shazam. As Billy tests out his own limits and goes viral with the help of his new foster brother, a villain harnessing the seven deadly sins comes gunning for him and his powers.

Over the past several years, we’ve seen all kinds of superheroes show up in cinema’s DC Universe with mixed results, but we’ve rarely seen how the world at large interacts with them. The public turns on Superman at one point in Batman v. Superman and Aquaman features the switch-and-bait of a tough-looking biker in a Maine bar who just wants a selfie with Aquaman, but otherwise, those glimpses are few and far between. That’s not the case here as the story leaves the fictional cities of Gotham and Metropolis and heads to Philadelphia, a city with a very famous fictional folk hero but none of its own to cling onto.

It exists in a world where not only are Batman, Superman, and Aquaman part of the cultural zeitgeist and name-dropped at a moment’s notice, but they’re also commodified and commercialized. (Who owns the trademarks to these superheroes, anyway?) Whatever their sins were at one point in their own films, these superheroes are largely idolized in Shazam!; their symbols are printed and sold on T-shirts while young children play with their action figures. They’ve got their own fans.

But none of that really interests Billy Batson (Asher Angel), the 14-year-old picked to be the champion of an ancient wizard (Djimon Hounsou) after Thaddeus Sivana (Mark Strong) obtains the power of the Seven Deadly Sins. Billy operates more in the here-and-now, having spent years searching for his mother, who he became separated from at a carnival at a young age and has been shunted from foster home to foster home ever since. He has little interest in his latest placement or his foster siblings, which includes superhero fanboy Freddy Freeman (It’s Jack Dylan Grazer), who is bullied by others because of his disability. But Billy’s chance encounter with the wizard transforms him into a buff and caped superhero (Zachary Levi), and with Freddy’s arsenal of knowledge, they begin to test what Billy is capable of doing, which Freddy films and posts online to launch Shazam into viral fame. (The film features a recurring gag in which nobody can really figure out just what to call him, likely in reference to the legal issues behind Shazam’s name.)

Shazam! goes full throttle on its zaniness during that experimental period that allows its characters to have fun. Levi’s performance—which is at times both gleeful and absurd, both often to its advantage—never lets you lose sight of the fact that even though Billy might look like an adult, he’s still a teenager at heart; immediately after gaining his powers, he tries beer, makes money, and tries to purchase a secret lair. And who else would have the wherewithal to think about how to use the bathroom in a one-piece superhero suit?

While it takes its time to settle in and touches on some of the touchstones of the superhero origin story we’re more than familiar with nearing the point of redundancy, once it finds its footing, Shazam! largely soars. Some of its CGI effects leave a bit to be desired and Sivana is at times an uninteresting villain (though Strong dives into the role full heartedly), but once the big fights take flight, it’s instantly engaging.

Shazam! captures some of the hope, wonder, and optimism that many of the DC Universe’s earlier films had been missing as it argues against superhero tropes. But it doesn’t shy away from the bigger themes it wrestles with, either. Even with his new powers, Billy is still a kid trying to find his place in a world that doesn’t seem to want much to do with him and Freddy doesn’t try to deny his own feelings of resentment during strained moments. Thaddeus Sivana’s origin story is one born out of toxic masculinity, revenge, and envy.

The centerpiece of Shazam!—and its core strength—isn’t about the superpowers or any feats of strength. It’s grounded in family, proving that it’s not necessarily just about who you’re related to. It’s who you connect with and who will support you through everything.

With a few surprises hiding just underneath the cape, Shazam! packs plenty of thrills. But there’s so much heart packed in that even when you can guess exactly where it’s going, it’s still a joy to watch.