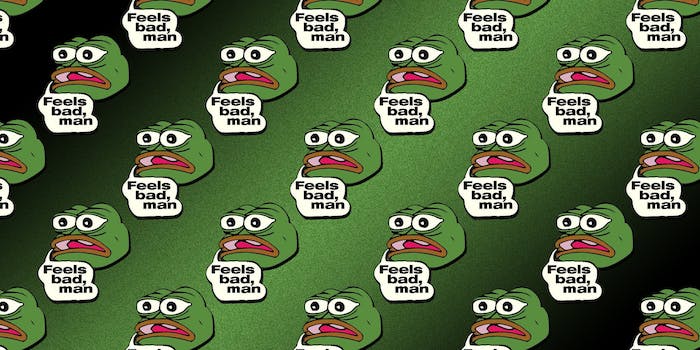 Pepe the Frog is not a Nazi, no matter what the alt-right says

One of history's finest memes is being held hostage.

Pepe the Frog has been taken hostage by the alt-right fringe. The once-noble meme is now an icon of white supremacy, trotted out to signify the Trump Train’s internet bona fides. He needs our help like never before.

The cartoon frog, familiar to anyone who’s been on the internet for too long, made his official debut in 2006 in artist Matt Furie’s Boy’s Club comic alongside several other “teenage monsters” disposed to the pizza-and-video-games lifestyle. Back then, his hijinks were mostly innocent, and they felt good, man. 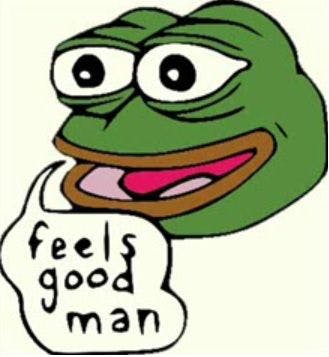 Pepe gained life as a meme on 4chan, which didn’t always suck as much as it currently does, and proved versatile enough to express a wide range of emotions, from smug pleasure to severe depression. As recently as last year, we marveled at the booming trade in Rare Pepes—unique remixes of Pepe as, say, Nicki Minaj or an Illuminati pyramid.

The Daily Dot even interviewed Furie about Pepe’s unexpected renaissance and longevity as a meme in 2015. He said the frog always “brings a genuine smile” to his face and that he hopes others experience this “thrill of overwhelming beauty and joy” whenever they encounter Pepe.

Sadly, that is no longer the case. As reported by the Daily Beast in May, Pepe has been co-opted by the alt-right, neo-Nazis, and the Donald Trump supporters (whether earnest or just trolls) who now rule 4chan. At the end of August, as Hillary Clinton formally spoke out against the toxically racist elements of Trump’s base and appeal, a 4chan poster was actually ejected from the event for screaming about Pepe.

But the Pepe/alt-right connection only reached critical mass this past weekend, as Hillary Clinton’s characterization of some Trump voters as a “basket of deplorables” went viral. In response, many shared Photoshops of the marketing materials for action film franchise The Expendables that included a Trump-style Pepe alongside Trump surrogates.

This, in turn, left mainstream media struggling to explain Pepe’s provenance and significance. NBC, for example, immediately identified him as a “popular white nationalist symbol.”

The Southern Poverty Law Center’s gloss here is more accurate: Pepe is indeed beloved by white supremacists, though not exactly a Klansman in his own right. And it’s worth noting that David Duke, former Imperial Wizard of the Ku Klux Klan and ardent Trump supporter, shared a version of the Expendables meme without Pepe in it.

Truthfully, Pepe lacks political affiliation. His prevalence in the Trump movement is most likely to be temporary, a simple coincidence of 4chan’s tendency to tie him to the most politically incorrect concept available at a given moment (an older image of a pilot Pepe about to fly his plane into the World Trade Center is a prime example). Besides, we’ve already seen Pepe versions of everyone from Barack Obama and Vladimir Putin to Bernie Sanders and Clinton herself.

It’s this lack of a moral or ideological center that has allowed the alt-right to hijack Pepe for their purposes. And you know what? It’s their prerogative. Furie—who declined to speak on the matter to the Daily Beast and has yet to reply to our own request for comment—has previously made it clear that Pepe belongs to everyone, and that the frog’s destiny is out of his hands. But it’s this same mutability that ensures Pepe will always be bigger and better than the racists who love him.

@ArianaGrande i luv u with all my pepe heart heh pic.twitter.com/SbpsZ6krdG

this rare pepe is in my menchies saying it's problematic to call the frog a nazi meme pic.twitter.com/TWbuL0ILWD

So, no—Pepe isn’t a Nazi. He’s not a white supremacist, and he’s not a Trump voter. Hell, he’s not even real. He is only what we make him, and in this election, the alt-right is trying to make him theirs.

But we know the truth. Pepe is love, and Pepe is life. Sure, sometimes he triggers or trolls us. In the end, though, his dankness as a meme wins out. We can’t stay mad at Pepe, and this too shall pass.

…lays a Rare Pepe. (Ignore the caption in the picture) pic.twitter.com/UX2yhcgkNw

See you on the other side, old friend.