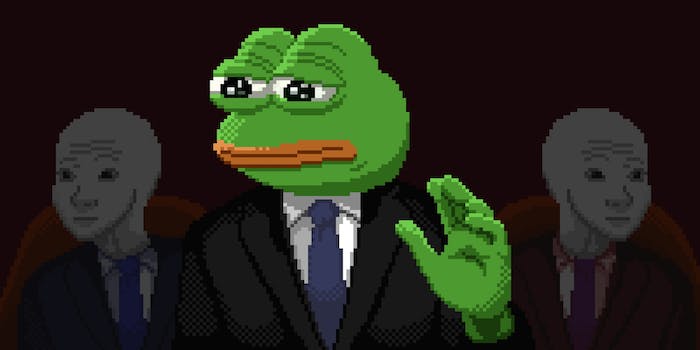 4chan has always sucked—but now it sucks worse than ever

Nobody should ever defend 4chan—we’re talking about a bitter image board where the absolute worst instincts of the internet can fester in horrifying symbiosis—but we’d be lying if we said it was never funny.

There’ve been plenty of hilarious moments over the years. That guy who literally fucked a skull stolen from an ancient catacomb (link VERY NSFW). The thousands of wonderful, dubiously authentic greentext poems that stick to the walls like ancient, butthurt graffiti. But more than that, 4chan was the origin point for tons of prototypical internet humor. Something as simple as an image macro (white text on a static .jpeg) was originally perfected on /b/ in 2006, long before the voters of Reddit got their hands on it.

Rickrolling was a 4chan original. That Navy Seals rant—incidentally my favorite thing on earth—was a 4chan joint; the very terms “copypasta” and “creepypasta” were first coined on that stupid website. For years, 4chan forced a sort of begrudging respect. Yeah it’s a dumb, banal, misogynistic kiddie pool filled with the worst kind of caps-locked “badassness,” but the jokes were still being reappropriated across the internet, and as much as we hate to admit it, that counts for something.

However, that’s not the case anymore. Today, not only is 4chan a deeply troubling, eternally trite community: It’s also super dull.

The internet is a much bigger place than it was in 2006. We’re living in a world where Hillary Clinton is campaigning with Twitter burns and people like Desus and The Kid Mero can score real production deals off of pure memeability, which I can only compare to Daniel Johnston getting a major record deal after Kurt Cobain said he was cool.

These are all good things—the internet is for everyone—but it also should be met with some suspicion. The second corporate money starts infiltrating something previously organic, questions have to be asked. In that sense, this would be the perfect time for some good, old-fashioned internet chaos. It’d still be misguided, but at least they’d be raging against something real.

Unfortunately, the opposite has happened. 4chan, specifically the notorious /b/ subforum, has never been more stale or uncreative. This is probably partially on me, because when you’re in your mid-20s and looking for the spark in the sort of stuff that occupied in your juvenile years, you’ll inevitably be forced to alter your perspectives, but I really do believe that in 2016, 4chan is broken in a unique, unfixable way. Every single fucking thread is the same uber-tedious takedown of “SJWs” coupled with the same semi-ironic exaltation of the forthcoming Trump Reich.

It’s constant, it’s dreary, and it’s just not interesting. I don’t need Breitbart rhetoric spat back at me from a no-rules image board. Technically, 4chan was always this way, but now they have a concrete Us vs. Them framework that’s made the site unbearable. At least in the past they weren’t so defensive.

It’s kind of hard to explain, but it feels like once upon a time, hubs like 4chan weren’t connected to any other context, and made jokes in their own native tongue. I mean, something as dumb as Rickrolling requires isolated primordial ooze. Now 4chan has been united with the rest of the world, and they can only process information in this ridiculous partisan mindset.

The site’s humor is now inextricably tied to some sort of ultra-right, anti-feminist message. Their enemies used to be SomethingAwful and eBaumsWorld; more recently it’s the Huffington Post and Kotaku. The few shards of innocence, like Advice Dog, or Rickrolling, will never be replicated—and that sucks. Because while 4chan was always gross, it’s grossness has become loaded with conscious political intent.

I’m all for silly internet pranks, and when 4chan was at its “best,” like when they stuffed a Mountain Dew ballot to get a new flavor called “Hitler did nothing wrong,” I am one hundred percent on board, no matter how offensive the gag is. But those ideas seem long gone. 4chan had a choice, and to the surprise of nobody, they opted to regress into their own ignorance and dying for the right to hate. They didn’t grow up.

One of the most influential communities in the history of the internet has never been less relevant or funny, and they have nobody to blame but themselves.