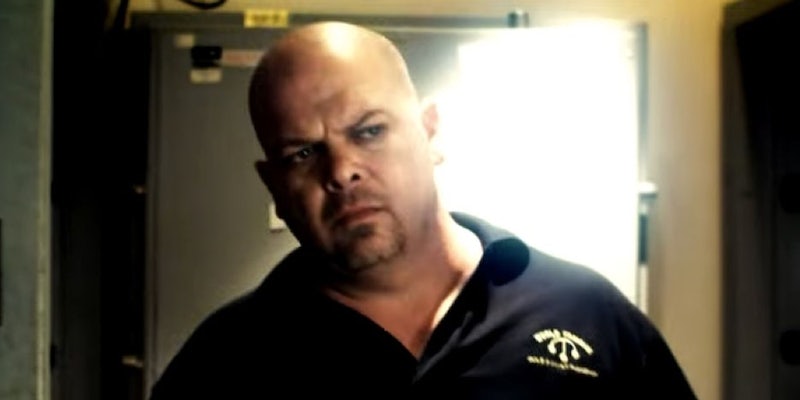 I'm Rick Harrison, and this meme is dead on arrival.

Over the past couple of weeks, a new meme has inundated social media, annoying and mystifying all in its path. “What is this new Pawn Stars meme?” asks a poster on Reddit‘s “out of the loop” forum. The answer is: It’s the opening voice-over from the reality television series Pawn Stars, about a man, a large son, and their pawn shop.

You’re not out of the loop, the meme is just… dumb.

Step One: Paste the following text.

“Hi, I’m Rick Harrison, and this is my pawn shop. I work here with my old man and my son, ‘Big Hoss.’ Everything in here has a story and a price. One thing I’ve learned after 21 years—you never know what is gonna come through that door.”

Step Two: There is no second step. This is the joke.

According to Know Your Meme, the “I’m Rick Harrison” copypasta can be traced back to 4chan circa 2010. For some reason, it’s been exhumed and trotted out, Weekend at Bernie’s-style, all over 2016 social media.

Meme Facebook pages like Bardock Obama and Dank Memes Melt Steel Beams seem to be at the epicenter of this Rick-quake, and it’s also all over Reddit’s various meme forums.

Although this meme was dead before it ever got started, it has spawned some new variations, hybrids that mix Pawn Stars with other memes.

In one version, the intro text is subtly altered to refer to Big Hoss as Harrison’s “large son.” “Large sons” was one of the greatest memes of 2015, and still has some humor value today, but when couched inside the insipid Pawn Stars meme, it is pearls before swine.

Another variation spoofs the emoji chain texts that were so popular in late 2015 and early this year: 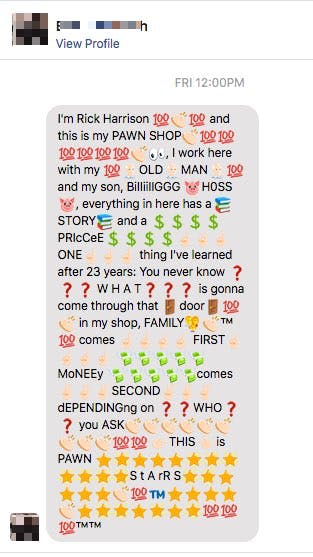 And a third mutation combines Harrison with the big blue “Nut” button that was so popular in the spring of 2016: 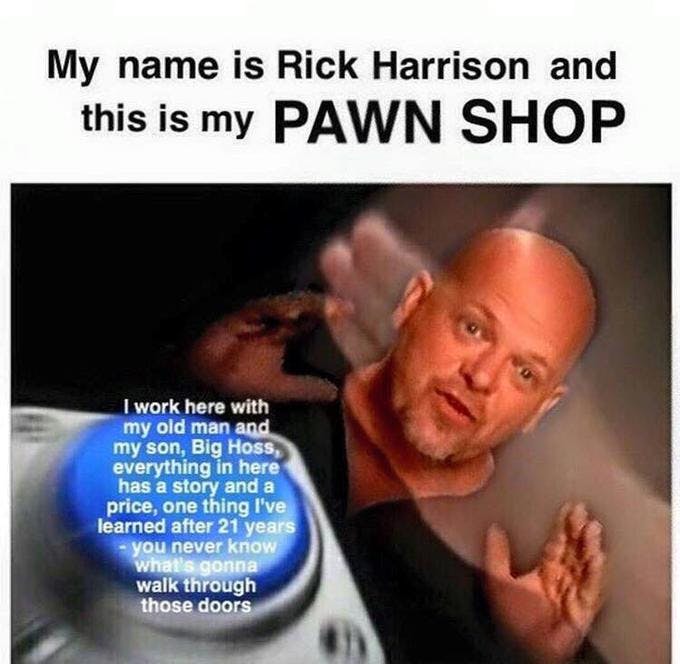 The most popular (and creative) spin on the meme, though, is the one that replaces Rick Harrison with another character and changes the details accordingly.

For example, this one from Reddit’s copypasta forum:

“I’m Harambe, and this is my zoo enclosure. I work here with my zoo keeper and my friend, Cecil the lion. Everything in here has a story and a price. One thing I’ve learned after 21 years – you never know WHO is gonna come over that fence.”

Or this one featuring Sad Pawpaw, whose grandkids didn’t come to dinner: 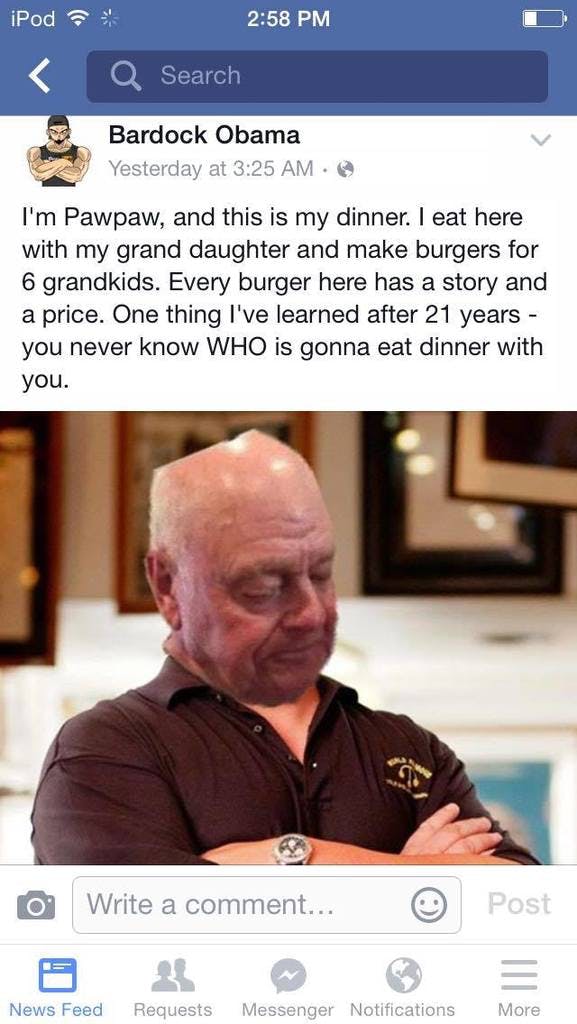 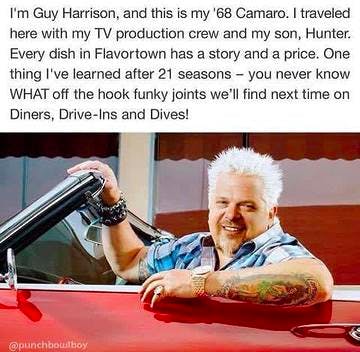 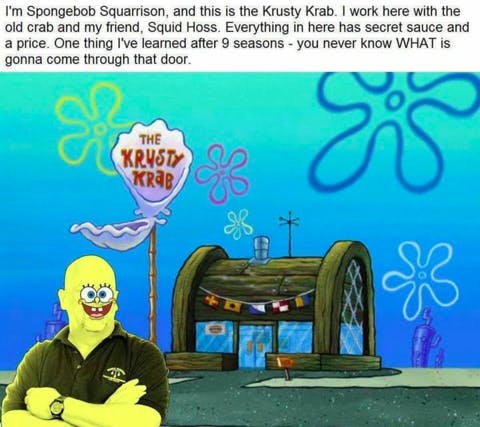 Here is perhaps the best take on this meme, an elaborate Pokémon GIF:

You can also just scramble the original copypasta, for whatever that’s worth:

I’m pawn shop, and this is my Rick Harrison. I work here with my old Hoss and my man, Big son. Everything in story has a price and a here. One thing I’ve 21 years learned – you never door what is gonna come through that know.

Or hit it over the head with a thesaurus:

Greetings; my given name is Richard Harrison and the facility we have entered is a retail establishment that specializes in unredeemed goods, which is the legal property of yours truly. I currently employ my paternal parental unit, alias, “Elderly Male,” and the offspring of oneself, whose given name is Corey Harrison, yet has assumed the identity, “Large Hoss.” Each individual item currently possessed by my ﬁne retail establishment beholds a lengthy narrative and of course, this being a legal retail establishment, can be acqulred for reasonable compensation. I have been the legal facilitator of this established haberdashery since the year MCMXCV, and in those XXI years, I have been gradually lnformed that; thy shall, at no time in the past, future, or present, be aware of by means of observation or inqulry, any details whatsoever of the material goods that will proceed past the aperture of my structure where goods are acquired and distributed simultaneously.

“Hi, I’m Rick Harrison,” can be understood as part of the class of jokes that consist entirely of pasted lines from pop culture. Two of the most prominent examples are the script of Jerry Seinfeld’s Bee Movie and the lyrics to “Smooth,” by Santana ft. Rob Thomas of Matchbox Twenty, from the Grammy-winning album Supernatural.

In these cases, and the case of Pawn Stars, the copypasta is the whole joke. It’s a non-sequitur that pops up on Facebook and might seem funny and weird the first dozen times you see it.

Bee Movie and “Smooth” better lend themselves to other uses, though. When Vanity Fair ran a very bad profile of Margot Robbie, people mocked it by replacing the text with Seinfeld’s opening monologue or Rob Thomas’s “Man, it’s a hot one,” etc.

It’s hard to imagine “Hi, I’m Rick Harrison” pulling the same rhetorical weight. Harrison is a character more akin to Chuck Testa. In case you don’t remember your ancient meme history, Testa was a taxidermist whose name turned into a popular interjection online around 2011. It was quickly overused and driven into the ground, so devoid of fun that it didn’t even experience an ironic revival.

The Pawn Stars meme looks like it might be treading the same path. There’s no subtlety or critical bent to the joke: just take anything, insert Harrison.

That’s probably why it’s nowhere on Weird Twitter, and various Facebook meme kids have already complained about it to the Daily Dot, asking us to put it out of its misery like Miles Klee did to Dat Boi (o shit, R.I.P.) back in May.

I don’t think we have to. The creative possibilities of PawnStars.meme have already been exhausted.