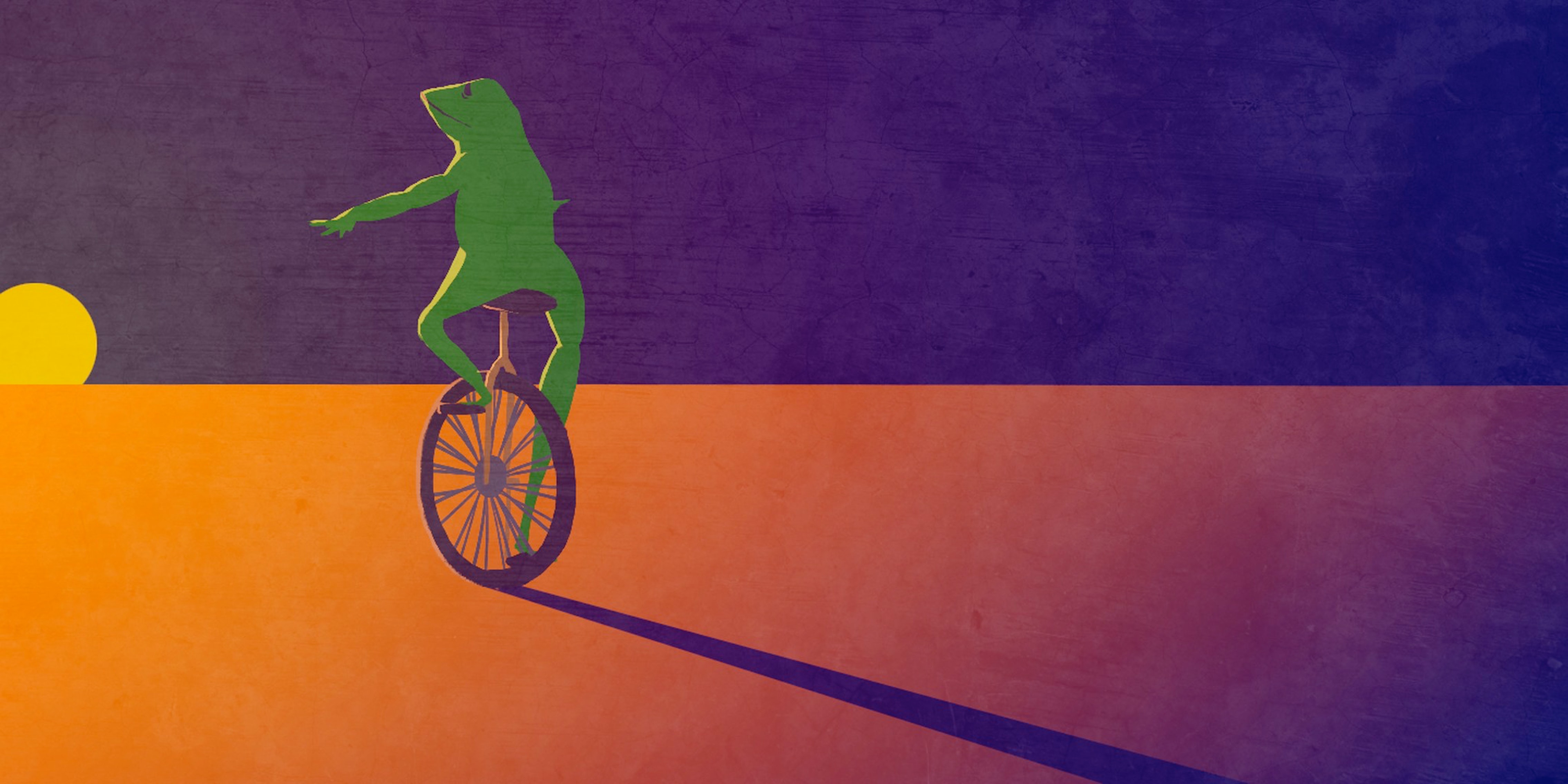 Earlier this week, I came across a dank meme. It was amusing. It was mutable. It was causing quite the reaction. It was everything you would want from ephemeral digital culture—and exploding in popularity.

It was dat boi.

Questions? You probably have some. But let me put you at ease: Memes like these aren’t made to be understood. You can’t explain a joke that exists outside itself. Dat boi isn’t even comedy, per se. It’s a commodity.

So yes, I dashed off an article about dat boi and its many silly permutations. As soon as the story went live, it garnered intense organic traffic through Google. Whether they were searching “dat boi” or “frog on unicycle,” readers were curious about the meme, which was starting to crop up everywhere.

It was clear I had sullied something sacred before it could truly blossom.

Of course, as I’ve mentioned, dat boi is inexplicable by design—and I didn’t try to make sense of it. The original GIF would seem to be a remnant of some Web 1.0 animation studio, decontextualized for maximum absurdity. All I attempted to do was showcase its potential for goofy fun.

Then came the torrent of eulogies.

Wow killed in record time. The media has optimized their meme crushing machine.

Yes, the meme vanguard was mourning the discovery of dat boi by the memestream media. For them, as with some hipsters and their favorite under-the-radar bands, a meme’s value is tied to its obscurity. Once the “normies” get their hands on it, the idea has been exhausted.

In the case of dat boi, many weren’t ready to say goodbye. And if you don’t believe in the theory of meme scarcity, you should see how angry they got.

AND THIS MEME IS OFFICIALLY FUCKING DEAD. FUCK YOU DAILY DOT https://t.co/OPxJndaxAJ

Some people even went so far as to personally message me on Facebook, telling me, “you just had to kill dat boi,” and “stop killing memes please.” It was clear I had sullied something sacred before it could truly blossom. 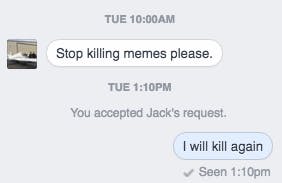 I should note, however, that a small minority claimed dat boi had been run into the ground long before the Daily Dot picked it up; they still considered my coverage the final nail in the coffin, but they celebrated his demise. This was probably due to confusion over the meme’s lifespan: Those who had become familiar with dat boi in the past week, when he truly went viral, were more upset than those who knew that he’d been around for months and/or found the meme to be “forced,” which is to say uninspiring and less than malleable. These hardliners hate anything with the whiff of formula. 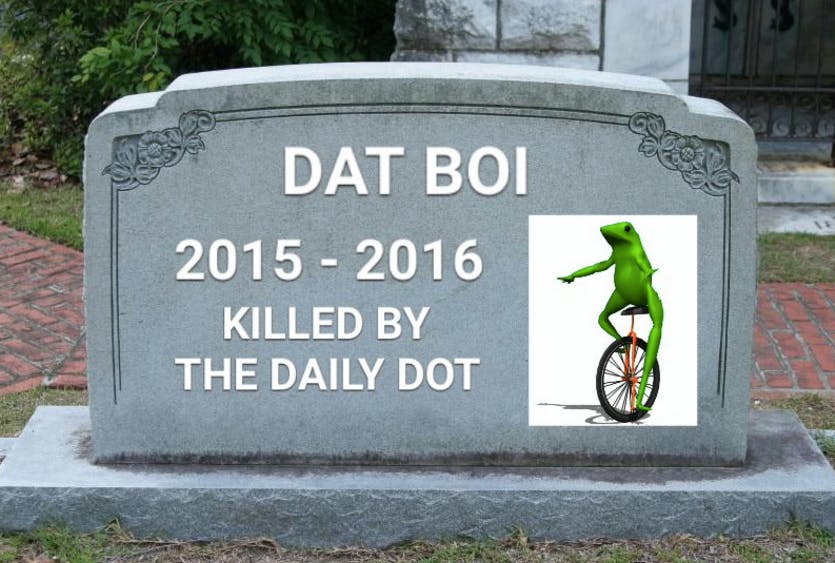 Does it surprise you that actual human beings would vent such anguish and grief over where on the Internet a specific cartoon frog appears? Or that within this supposedly underground and monolithic meme microculture—which by cruel necessity must exist in the public, unprotected space of social media—there are fine ideological divisions and internecine feuds?

Memes cannot die. They are only ever reborn.

It shouldn’t. This particular hive mind is operating through countless layers of performative irony. At the risk of enraging these memesters further, I would argue that taking memes too seriously is part of the joke. In fact, it may be the entire joke. I don’t believe that anyone who lobbed the insult “normalcuck” at me (itself an epithet bred from the vernacular of Donald Trump‘s Twitter boosters, because the meme life is about nothing if not appropriation, which accounts for revulsion when a company follows suit) really meant it. I don’t believe that the guy who messaged me to say: “stop the ruining of memes! u are’ a one lousy mothfucker for doing this. there is will be revolt mister” really envisions a revolt against meme ruiners.

That’s not to disregard the evident passion of the highest meme cabals. They are caught in the same punishing churn of phenomenon-and-backlash as anyone else who invests time and effort in digital properties. They recognize the life cycle of a meme, and scrutiny from someone like me—for a website like this—can only hasten a meme’s demise. Yet even in that period of lament, the meme’s resilience often shines through.

That is to say: Memes cannot die. They are only ever reborn. 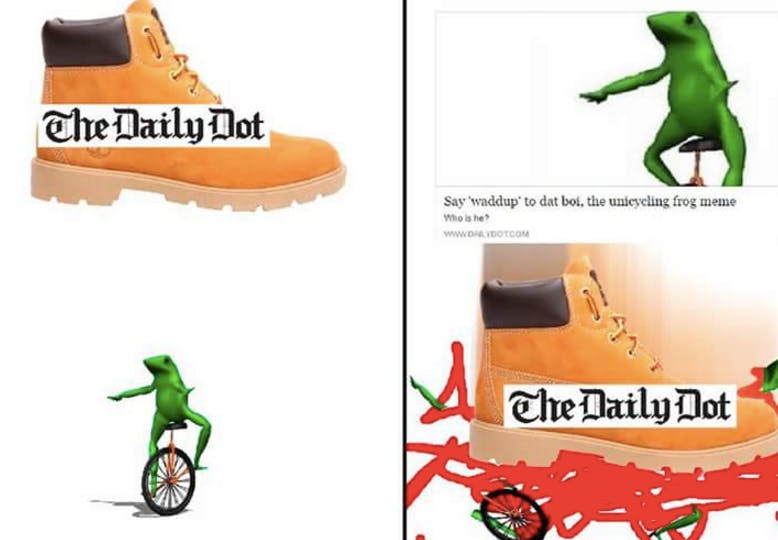 And whether or not you take the meme scene at face value—again, a mistake they’ll surely exploit for further fun—I have to insist that they are making dangerous claims about the ownership of fluid, evolving concepts that hinge on essentially stolen artifacts. They’re frustrated that the very mechanism of virality makes it impossible to hoard premium memes.

Here’s what the meme elite—the meme percent, if you will—won’t admit: Memes belong to whoever uses them.

In that sense, it’s perfectly understandable that I’m seen as a pillaging invader who washed up on their remote shores to sack an unassuming country, hauling off whatever I found. But this supposes that memes belong to whoever initially fosters them, and that these individuals are selfless, benevolent creators. You could just as easily argue that I’m a Robin Hood or Bernie Sanders figure, liberating content from an ivory tower. “The redistribution of memes” sounds a lot better than “meme killer.”

Here’s what the meme elite—the meme percent, if you will—won’t admit: Memes belong to whoever uses them. To the extent that some particular meme conveys an emotion, action, or state of being, it is a language in which anyone may become fluent. Who are these shadowy Internet addicts to say that the masses are not allowed access? Wasn’t the Web meant to put an end to gatekeepers? The people roasting me for shedding light on dat boi aspire to a form of control as evil as it is nonsensical.

I do believe I am dat boi

Miles Klee is the LOL editor of the Daily Dot.