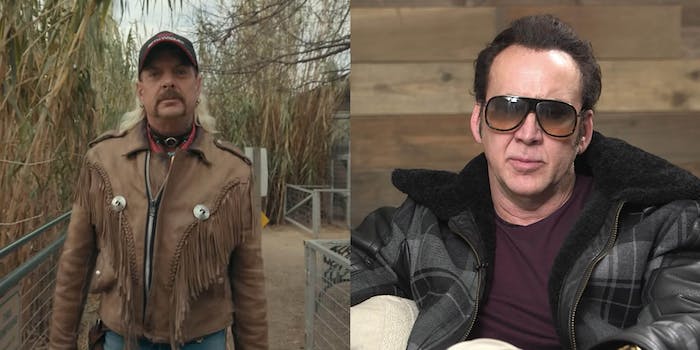 Twitter users are freaking out about the perfect casting.

The question of who shall play the Tiger King, Joe Exotic himself, in one of several upcoming scripted takes of the original docuseries has finally been answered.

The big cat crown will be taken up by none other than Nicolas Cage, for what will be his first-ever role in a TV series.

Variety broke the news on Monday. The Cage-starring series is set to be an eight-episode affair, produced by Imagine Entertainment and CBS Television Studios, though it doesn’t yet have a home in terms of where it will air (or stream). It will be based on the Texas Monthly article “Joe Exotic: A Dark Journey Into the World of a Man Gone Wild” by Leif Reigstad and run by Dan Lagana, who previously ran American Vandal for Netflix.

If you are one of the rare people in the English-speaking world that has avoided the Tiger King craze, the Netflix docuseries revolves around Joe Exotic, a zookeeper in Oklahoma, and explores his long-standing feud with animal rights activist and big cat sanctuary caretaker Carole Baskin. The series also runs viewers through his several marriages, and his eventual 22-year-sentence to federal prison after hiring a hitman.

Multiple projects have been in the works following Tiger King’s runaway success, with a different notable limited series set to star Kate McKinnon as Carole Baskin. That take will be based on the podcast Joe Exotic.

McKinnon’s project has sparked a conversation around who might play Joe Exotic himself in any of the upcoming adaptations, with plenty of actors publicly expressing their interest. But now that a take on this wild big cat ride has been announced with Cage front and center, nothing has ever made more sense.

Twitter users agreed, saying Cage was born for the role.

As perfect as the casting is, there’s also something vaguely surreal about the whole thing. Maybe it’s because both of these figures are larger than life. To try to throw them into the same space seems almost like it might overload the matrix.

Joe Exotic himself had previously declared his wish for Brad Pitt or David Spade to play him in an adaptation, and some fans feel a little let down that his wildest dreams aren’t coming to fruition at this moment.

But either one of them could still jump on any of the other adaptations that are on the way. For now, living in a world where Nicolas Cage is Joe Exotic just feels right.

No other cast members have been announced at this time, but we will absolutely be waiting with bated breath for any additional news.