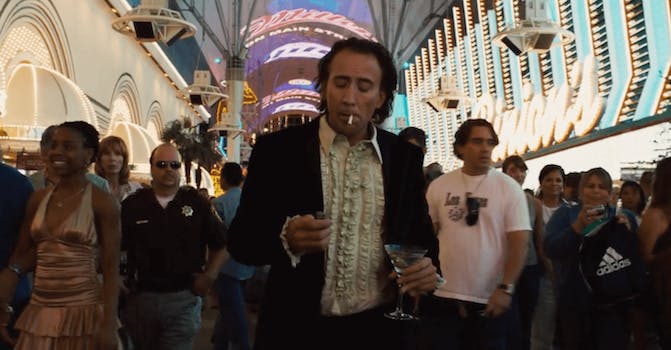 Stream the films of one of Hollywood's weirdest and wildest actors.

When you find one you’ve never seen, there is no particular guarantee of quality, but there is a guarantee that you have absolutely no idea what you’re in for. You might be getting Adaptation or Raising Arizona or Ghost Rider. The majority of Nicolas Cage movies on Netflix are closer to Ghost Rider than Leaving Las Vegas, but there are a number of whacky roles through which you can see another piece of one of Hollywood’s strangest careers.

Whether you want to see him as a medieval knight, precognitive gambler, or a haunted trucker, Netflix has the perfect option for you. Here are all of the Nicolas Cage movies on Netflix right now.

Whatever you might think of National Treasure, it launched a wildly successful franchise. This is an incredible feat for a concept not based on existing intellectual property. “Patriotic Da Vinci Code” isn’t the most original idea, but it proved to be a bankable one. National Treasure is a big, dumb movie, but it is also fun. The film mixes a bunch of longstanding conspiracy theories, from the Knights Templar to the Masons, with sequences like the heist of the Declaration of Independence without interrogating anything too carefully. The results are enjoyable enough. Much of that is due to Nicolas Cage, who has perfected bringing unabashed enthusiasm to even the oddest ideas. I don’t imagine National Treasure will be earning a place in the Criterion Collection anytime soon, but there are people out there who will be glad to see it among the Nicolas Cage movies on Netflix.

In this film, Nicolas Cage can see the future, even if only a few minutes of it. When we meet his character, Cris, he is using his skills for little more than his pitiful job as a casino magician and to hustle some small-time gambling wins. As so often happens on film, powerful people find out about his gifts and want to use him to their ends. As a poorly reviewed film with a weird premise and a strange lead character, this is exactly the kind of movie you think about when you think about Cage’s career. It isn’t a good film, but it is very much a Nicolas Cage film.

This is one of the finest, kookiest, most underrated Nic Cage joints around. Cage stars as John Koestler, an MIT professor who discovers a link between a seemingly random set of numbers and past and future disasters. With the fate of the world hanging in the balance, John must stop what is preordained before it’s too late. Knowing is a movie that constantly ups the stakes and upends audience expectations. It goes to some truly wild places, anchored by solid work from Cage, lively direction from Alex Proyas, and a script that just won’t quit. —Eddie Strait

Of course, one of the Nicolas Cage movies on Netflix is a family comedy about guinea pigs. To be clear, he plays a mole. We don’t want to get your hopes up if you are a guinea pig enthusiast who also has a soft spot for Cage. Specifically, the film is about a team of super-spy guinea pigs who have to save the world from an apocalypse brought about by self-aware kitchen appliances. Never let them tell you there’s no art anymore. The mole Cage plays here is named Speckles.

While Season of the Witch isn’t exactly a good movie, it is one of those Nicolas Cage films you’ll be glad exists. Cage plays a 14th-century crusader named Sir Behmen von Bleibruck (just rolls off the tongue doesn’t it?) who, along with a fellow knight played by Ron Perlman, has to transport a witch (Claire Foy) to a monastery in hopes of lifting a curse. As you can imagine, critics panned the film, but that doesn’t mean you won’t have a good time watching it. While it has just as much scenery-chewing as you would expect, it is also rife with allusions to Ingmar Bergman’s The Seventh Seal, making an already strange viewing experience that much weirder. Ah, cinema.

Dreamworks films sometimes end up underrated or under-seen in an animation space that Disney/Pixar largely crowds. The Croods is an example of the sweet, thoughtful family fare Dreamworks delivers that deserves a second look. The film uses cavemen to discuss the parental balance between protecting children and letting them truly experience life. As the world changes, can cave parents let their children change with it? It’s a compelling question, and it isn’t meant as an insult to say that Grug is one of Nicolas Cage’s most deeply human (or perhaps pre-human) recent performances.

The beautiful thing about Nicolas Cage is that he isn’t afraid to do wild movies. But the downside of his bullish career moves is that he is in some truly terrible films. Left Behind, the amazingly dull tale of evangelical apocalypse adapted from the book of the same name, has to be one of his worst. Here, Cage plays Rayford Steele, an adulterous sinner who becomes the unlikely beacon who just might save humanity. Only by the script’s weakness matches the film’s technical shortcomings. Critics uniformly threw adjectives at this film like “flat,” “dull,” and “inert.” Not only is this film a sin in its own right, but its profitability—Left Behind made $27 million globally on a $16 million budget—demonstrated once again that there is money to be made by making terrible films for an evangelical audience.

In one of the more tame roles Nicolas Cage has taken in recent years, The Runner casts him as a congressman dealing with both the aftermath of the Deepwater Horizon incident and a sex scandal that threatens to ruin him personally and politically. Unlike some of the other poorly reviewed films Cage has taken on in recent years, The Runner has no note of weirdness or wildness. Instead, the story is a bog-standard tale of failure and possible redemption that does a lot of things we’ve seen before fairly poorly. In fact, Cage has played characters in prisons of their own making to much greater effect in the rollicking Raising Arizona and the desperate, pained Leaving Las Vegas.

This is one of those goofy Nicolas Cage movies that isn’t perfect but is still perfectly enjoyable. He and Elijah Wood play bumbling cops who decide to stage a heist. As you can imagine, things go very wrong, and a very dark comedy ensues. Thankfully, Cage is at his zany best, keenly aware of what kind of movie he is in and why. This one isn’t going in the Criterion Collection any time soon, but it might be worthy of your Netflix queue.

If you didn’t know that Nicolas Cage starred in a World War II movie, now you do. USS Indianapolis is one of those stories that is pretty compelling but doesn’t offer enough plot to sustain an entire feature-length film. Essentially, a naval ship is sunk and sharks attack the survivors. A hackneyed mix of events, including a love triangle and a media witch hunt of Cage’s character, fills the space between the sharks and confirms that the movie was hoping to get by on patriotism rather than plot. Since the film made just $1.6 million on a $40 million budget, clearly the filmmakers bet wrong.

A Paul Schrader–directed film starring Willem Defoe and Nicolas Cage should probably be better than this. Dog Eat Dog has one of those simple premises that should let the talent in front of and behind the camera do their best work: three ex-cons kidnap a baby. But the film doesn’t quite hit the dark comic tone it’s going for, and the results are disappointing. What is supposed to be contemplative comes off as meandering and unfocused. What is supposed to be edgy comedy comes off as cruelty. Dog Eat Dog provides an example of how even when you get a talented group of people together things can still go off the rails.

Once you hear the concept of this one, you’ll audibly groan at the pun of the title. You see, the film is about the conception, fertility, and surrogacy. If this subject doesn’t seem like the most appropriate material for a psychological thriller starring a man, then you would be on the side of most critics and viewers. The Hollywood Reporter‘s line on the film, “Save your money and watch a Lifetime movie instead,” is pretty much the critical consensus.

Between Worlds is another film from the dregs of Nicolas Cage’s filmography. Here, he plays a trucker haunted by the memory of his dead family. At first this is figurative, and then it becomes literal. Though the film features Cage at his weirdest, even his beloved theatrics can’t save a project that is as technically inept and poorly thought out as they come. What is meant to be an homage to David Lynch ends up as stilted and lifeless as the family that haunts our hero. Just when you thought the film couldn’t get any worse, it veers from just plain bad into problematic with an ease that is shocking and troubling for a film that otherwise is painfully labored.

The Humanity Bureau is one of those allegories that isn’t entirely clear on what point it is trying to make. In the film, Nicolas Cage plays a Humanity Bureau agent. The Humanity Bureau is like ICE or the Gestapo, but rather than victimizing people based on their race or ethnicity, they root out members of society who are deemed unproductive. Perhaps there is some kind of critique of bureaucracy or technocratic centrism that this premise could sustain, but this is not that movie. Not every dystopian film has to have perfect politics. Heck, there is even room for a cheesy allegory built on a flimsy premise if there’s enough fun along the way. But The Humanity Bureau takes itself so seriously that you can’t even enjoy its less-than-thoughtful take on the future. It’s dumb and it’s not even a fun kind of dumb.

This is probably the strongest Nicolas Cage movie on Netflix, though he only stops by for what amounts to little more than a cameo. Into the Spider-Verse cleverly takes the idea that anyone can be a superhero and uses multiple dimensions as a way to celebrate diversity, present various takes on the same role model to children, and have a ton of fun along the way. Phil Lord and Chris Miller, the comedic duo known for their chaotic meta-textual uproarious comedies, are the perfect fit for the film, which is one of the best family films of recent years. The dynamic collision of worlds, rendered with bold colors, impressive animation, and clever comedy, is truly fun for the whole family.