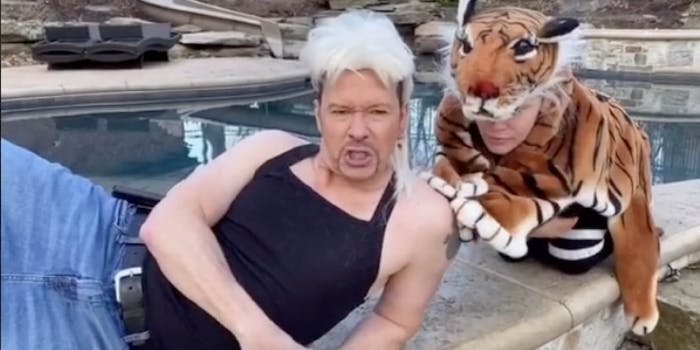 She really pulls off that tiger suit.

Everyone is on the Tiger King train.

Millions of people around the country have made their way through the first season’s seven episodes. Even celebrities—holed up at home like the rest of us—have been bingeing the addictive Netflix series. Joe Exotic and the rest of the colorful cast have already inspired several iconic parodies, but few rival Donnie Wahlberg and Jenny McCarthy’s recent entry.

The couple uploaded their brilliant attempt at Tiger King humor to TikTok. If you haven’t seen the series—for some reason—here’s a touch of background. The true crime docuseries follows Joe Exotic, the owner of an exotic animal park, in his feud against big cat conservationist Carole Baskin. Over the course of its seven episodes, the series reveals a slew of strange, fascinating side-characters and delves deep into Exotic’s odd life, personality, and career. It is a wild ride and one that comes highly recommended.

Clearly the McC-Wahlbergs are in on the fun. They uploaded a much briefer, Wahlberg-starring version of Joe Exotic’s story. It’s incredible.

Wahlberg takes on the role of Joe Exotic while McCarthy dons a tiger costume to portray his “meow meow kitty.” The whole masterpiece is set to a clip from “Because You Love Me” by Joe Exotic and his band Walking On The Edge.

McCarthy uploaded the clip to TikTok, where it has racked up nearly 25,000 likes. The Masked Singer judge has been on the rise on the platform, where she has 212,800 followers and 470,400 likes. Her most popular uploads tend to feature her husband, like this surprisingly on-point dance.

Can I spend the rest of quarantine at their house?