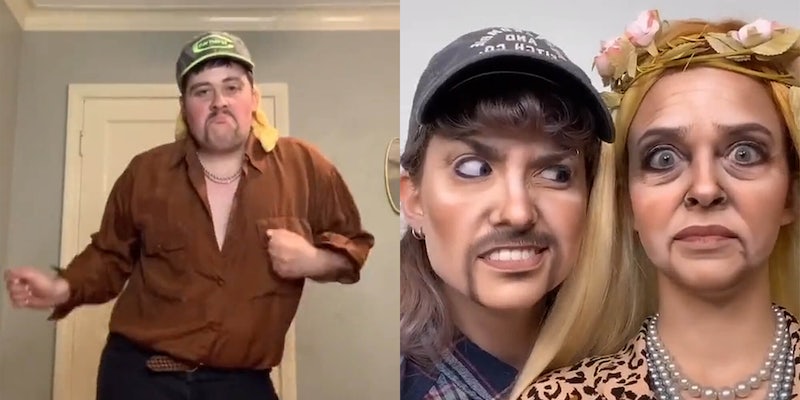 The 'Tiger King' backlash is here, but TikTokers are still obsessed.

We’ve gone from a nation obsessed with Netflix’s Tiger King to one that’s seen behind the curtain and wondered if we made a huge mistake. But that doesn’t mean the content stops.

“Carole Baskin killed her husband, whacked him. Can’t convince me that it didn’t happen,” the lyrics go. “Fed him to tigers, they snackin’. What’s happenin’? Carole Baskin.”

The song has been used in more than 1 million TikToks, and the Daily Dot reached out to Jaxin for some insight into its origin. While some people have just done their own dances to it, others punched it up by cosplaying as rival zoo owner Joe Exotic (currently in jail for plotting to murder Baskin).

Makeup artists put in the work turning themselves into Baskin and Exotic.

The song inspired others to do some DIY art. Or get creative on dating apps.

Even the cast of Riverdale got in on the trend.

It’s easy to see why the song is so popular; it’s a hyper-fusion of two pieces of pop culture. But there’s also a disconnect (that goes beyond TikTok), a troubling though expected impulse to hold the flighty Baskin up as the villain and paint Exotic as some kind of wacky backwoods folk hero. It’s sexism, sure, but it also says something about how we process the grotesque and cruel now.