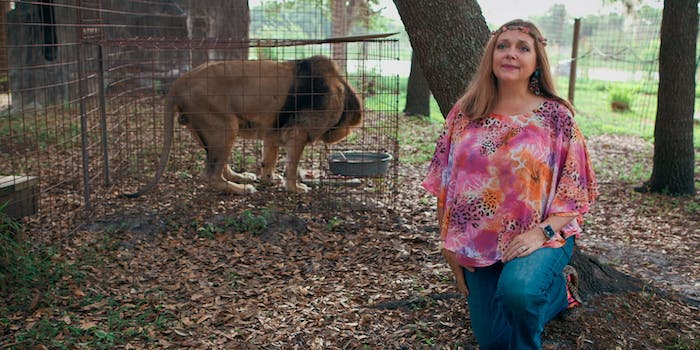 Fans are freaking out over the theory, which is mostly rooted in memes.

Tiger King has riveted a nation of Netflix subscribers stuck at home with tons of free time. In turn, it has also inspired plenty of amateur sleuths who believe they’ve discovered even more twists in the salacious docuseries.

One popular conspiracy theory that began circulating on the internet last week is that businessman Jeff Lowe is actually Michael Murdock, the first husband of Big Cat Rescue founder and CEO Carole Baskin. In 2016, Lowe purchased and reopened the Greater Wynnewood Exotic Animal Park from founder Joe Exotic, who was recently sentenced to 22 years in prison for charges including a murder-for-hire plot against Baskin. Lowe pleaded guilty to mail fraud in 2008.

Facebook user Sandee Hunt Brady floated the theory in the “Tiger King memes” group on March 30. “My just fun theory: Jeff is Carol’s abusive 1st husband that she paid off to go take Joe down. She rented a mansion and that car to draw him in,” she wrote. “Carol’s daughter looks like him. Look at the picture! It’s him.”

The popular post is based purely on anecdotal, arm-chair evidence—but fans are working themselves into a frenzy trying to connect the dots.

Brady continued: “Jeff and the fat red head guy even admits they directed Joe to kill Carol. When Joe didn’t do it, they needed him to pay, he didn’t. So Jeff sent his friend and he ‘chickened out’ on purpose. Carol paid them alllll off. All the convicts around him except the guy that lost his arm and the guy with no legs. Jeff even told the cops about the Tiger skulls….yep, because they didn’t have enough to keep him otherwise on the bogus ‘killing plot.’ Carol is ruthless!”

Brady’s post has received more than 1,400 likes and a whopping 4,300 shares. Many Twitter users have identified with her theory, noting the similarities between Lowe and Murdock. Others apparently noted that Lowe was previously convicted for assaulting an ex-wife, while Baskin alleged her first husband was physically abusive.

In an apparently edited version of her post, Brady wrote, “Too bad I wasn’t the police investigator. I would of definitely caught this bullshit.”

As fans continue to spin elaborate theories about the nefarious subjects of Tiger King, many cast members will get the opportunity to explain themselves on Netflix’s new Joel McHale-hosted aftershow, The Tiger King and I. Just don’t expect the currently-imprisoned Exotic to make an appearance.