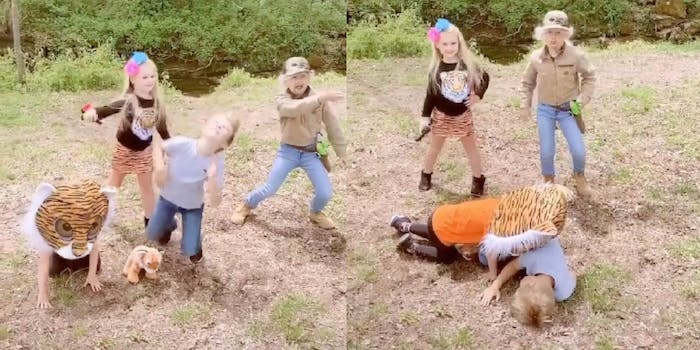 'Little Joe was in character.'

Kids are starting to get in on the Tiger King meme fun, and obviously, they’re flexing on everyone else. Four kids gave a stellar performance to the “Tiger King/Savage” mashup on TikTok, and viewers are obsessed with these little icons.

The children dressed as Carole Baskin, Baskin’s late husband Don Lewis, Joe Exotic, and of course, one of Baskin’s tigers.

The kids basically acted out one of the main theories about Lewis’ death while doing their own version of the “Savage” dance.

Little Baskin whipped out a “knife” and “slit” Lewis’ throat, along to the lyrics “Carole Baskin/killed her husband/whacked him.”

Once little Lewis was “dead,” the tiger eats him, while small Exotic in the back eats it up to “can’t convince me/that it didn’t happen/fed him to tigers/they snackin’.”

The video ends with Baskin standing victoriously over her dead husband while serving looks, and Joe Exotic whipping out a nerf gun.

Viewers were obsessed with the children’s fabulous performance.

“Little Joe was in character okayy,” one user tweeted.

“She’s an icon. She’s a legend and she IS the moment,” one user said about little Baskin’s iconic hair flip at the end.

“If they get robbed from a Grammy and Oscar we riot,” another user said.

Even Megan Thee Stallion herself was impressed with the kids.

“Look at lil Joe,” she tweeted with crying laughing emoji.

The TikToker who posted the video, @allysonshoulders, hasn’t uploaded another video with the kids yet, but fans are holding out hope for more content.