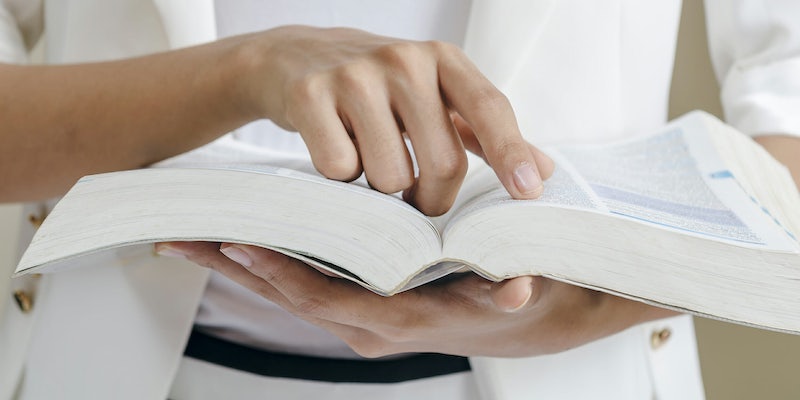 Even as someone paid to read, write, and edit them, I can find it tricky to keep up with the ever-expanding lexicon required to comprehend the day’s news, particularly now that it also includes various entries in Russian as well as the standard English. Every day, there’s a new story that will make you try to figure out words you never had to know (ignominious), words you knew in high school but forgot (filibuster, conflate), and words you thought you knew but are being used in a new context (nuclear, immunity).

But there’s also a class of words we didn’t expect it to have to define: words everyone seemingly knows the meaning of except a member of the Trump administration. After some inevitable misuse or abuse of said word, the rest of America sets off flipping through their reference tomes to reaffirm their understanding of English and extinguish the gaslight that has ignited for over half the country.

The unlikely superhero emerging from the rubble of this imploding 24-hour news cycle is Merriam-Webster. The nearly 200-year-old dictionary’s Twitter presence has helped readers stay abreast of all these terms and more through concise (and sometimes biting) tweets.

Here, for your convenient reference, we have collected some (though by no means all) of the everyday terms that Trump or one of his staff has sought seemingly unnecessary clarification on and the Merriam-Webster definition—in alphabetical order, naturally.

noun big·ot ˈbi-gət : “person who is obstinately or intolerantly devoted to his or her own opinions and prejudices; especially :  one who regards or treats the members of a group (as a racial or ethnic group) with hatred and intolerance”

Use it in a headline: “Donald Trump doesn’t seem to know what a ‘bigot’ is”

Say what now? In an interview with Anderson Cooper, Donald Trump repeatedly stated that Hillary Clinton was bigoted, based solely on his analysis that “she’s not doing anything for [the African-American or Hispanic] communities” in America. In five subsequent questions, Cooper tried to suss out what Trump believed about her alleged bigotry, attempting to get at the core issue of whether her actions were motivated by an antipathy of blacks or Hispanics. Ultimately, Trump downgraded to “well maybe she’s lazy,” which is certainly a different allegation altogether. Bigotry is treatment of a group with hatred or intolerance, not mere laziness.

adjective com·plic·it kəm-ˈpli-sət : “helping to commit a crime or do wrong in some way”

Use it in a headline: “After ‘SNL’ skit, Ivanka Trump claims not to know what ‘complicit’ means”

Say what now? When Gayle King asked Trump’s eldest daughter and newest White House recruit Ivanka how she would respond to allegations that she’s complicit in her father’s sexist policies, Ivanka responded: “I don’t know what it means to be complicit, but I hope time will prove that I have done a good job.” This dichotomy seems to portray complicit acts as the opposite of doing good work, but that’s not quite it. “If being complicit is wanting to be a force for good and to make a positive impact, then I’m complicit,” she added. No, that’s not it either. Rather, the definition of complicit refers to cooperation in a criminal or other wrong act.

noun ˈkau̇n(t)-səl : “a lawyer appointed to advise and represent in legal matters an individual client or a corporate and especially a public body”

Use it in a headline: “Merriam-Webster Just Reminded Donald Trump About the Difference Between ‘Counsel’ and ‘Council’”

Say what now? Just as former acting Attorney General Sally Yates was preparing to testify before a Senate Judiciary subcommittee, Trump took to Twitter to give the committee a suggestion or two about questions it should ask her. Specifically, he wanted to know how classified info made its way to newspapers after she briefed White House counsel (read: lawyers) on it. Except he wrote council, because of course he did.

noun ˈfakt : “a piece of information presented as having objective reality”

Use it in a headline: “Merriam-Webster schools Kellyanne Conway on facts with one perfect tweet”

Say what now? In what was perhaps Kellyanne Conway’s most infamous interview to date, she described White House Press Secretary Sean Spicer’s claims about the size of Donald Trump’s inauguration crowd as “alternative facts”—or, as Meet the Press host Chuck Todd put it, “a provable falsehood.” Since objective truth is at the core of the definiton for fact, Conway’s “alternative” take has been relentlessly skewered since late January.

noun fem·i·nism ˈfe-mə-ˌni-zəm : “the theory of the political, economic, and social equality of the sexes”

Use it in a headline: “Merriam-Webster calls out Kellyanne Conway’s definition of feminism”

Say what now? Much like with “alternative facts,” Conway seems to think that adding an adjective to the front of a noun phrase makes it mean something entirely different—in this case, “conservative feminism,” which she defines as being “a product of my choices, not a victim of my circumstances.” Regular old feminism, she said, is “very anti-male and it certainly is very pro-abortion.” Abortion, of course, has nothing to do with the definition of feminism at all, and while it is pro-female, that does not make it “anti-male.”

noun im·mu·ni·ty i-ˈmyü-nə-tē : “freedom from an obligation or penalty to which others are subject”

Use it in a headline: “Michael Flynn reportedly willing to testify if granted prosecution immunity”

Say what now? Former national security adviser Michael Flynn probably knew exactly the definition of the word “immunity” before he made an offer to the FBI and Congressional committees to testify in their investigations of the Trump camp’s ties to Russia. But such a bold claim sent the rest of the world straight to their dictionaries to make sure it meant what they thought it meant: chiefly, that he would avoid prosecution if he shared any self-incriminating details during said testimony.

noun nep·o·tism ˈne-pə-ˌti-zəm : “favoritism (as in appointment to a job) based on kinship”

Use it in a headline: “Nepotism Laws Don’t Apply to Jared Kushner Appointment, DOJ Says”

Say what now? Plenty of pundits have raised an eyebrow at Trump’s appointments of his family members to influential roles in the White House: Daughter Ivanka became a government employee last month, and her husband Jared Kushner is a senior adviser to the president. According to the New York Times, “the president’s special hiring authority exempted White House positions from a 1967 law barring the president from employing relatives.” Still, that hasn’t stopped the term nepotism from cropping up in discussions about the two throughout Trump’s presidency.

This is what it means to be presidential. https://t.co/uR62m9UqZW

adjective, ˌpre-zə-ˈden(t)-shəl, ˌprez-ˈden(t)- : relating to a president, embodying the dignity of the office of the presidency

Use it in a headline: “The Rituals of the Presidency Make Trump Seem More Presidential“

Say what now? Much has been said about Donald Trump’s ability or inability to act presidential in his current office. After a series of early stumbles and petty tweets, many praised Trump’s relatively calm demeanor during his first national address as substantially more presidential, seeming to imply that he seemed better suited to the job. The term surfaced again after the recent missile attacks on Syria: Rep. Maxine Waters (D-Calif.) sent a scathing tweet the following morning, saying in no uncertain terms that attacking another nation shouldn’t be misconstrued as presidential behavior. We can’t say for sure whether it was this event that prompted Merriam-Webster’s recent blog post to clarify the meaning of the term, but the timing is suspect. In that post, Merriam-Webster concedes that the connotation of presidential has changed substantially over time. Also of note: The post concludes with a reference to the “not terribly presidential” Andrew Jackson, who made an appearance in a recent New York Times article for his similarities to Trump on other measures.

noun sac·ri·fice ˈsa-krə-ˌfīs, also -fəs or -ˌfīz : “destruction or surrender of something for the sake of something else; something given up or lost”

Use it in a headline: “Donald Trump Doesn’t Seem To Know The Meaning Of Sacrifice”

Say what now? In a stirring speech at the 2016 Democratic National Convention, Khizr Khan, the father of a fallen Muslim soldier, addressed then-presidential candidate Donald Trump bluntly: “You have sacrificed nothing,” he said. In response, Trump simply rattled off a list of his business accomplishments: “I think I’ve made a lot of sacrifices. I work very, very hard. I’ve created thousands and thousands of jobs, tens of thousands of jobs, built great structures. … I’ve had tremendous success.” This doesn’t jive with the accepted definition of sacrifice, which generally requires something to have been given up to accomplish something else.

Good morning! The #WordOfTheDay is…not 'unpresidented'. We don't enter that word. That's a new one. https://t.co/BJ45AtMNu4

Use it in a headline: “Donald Trump blasts China for taking U.S. drone, tweets the move was ‘unpresidented’”

Say what now? Trump didn’t actually use the term unprecedented (not having been done before); he tweeted the typo unpresidented. This inevitably led to widespread internet mocking of his made-up term, suggesting he be “unpresidented” (presumably, verb, removed from the office of the president) instead.

verb vin·di·cate ˈvin-də-ˌkāt : “to free from allegation or blame; to provide justification or defense for”

Use it in a headline: “Trump feels ‘somewhat’ vindicated by Nunes findings”

Say what now? After agencies and politicians came out against Trump’s claim that former President Barack Obama wiretapped Trump Tower, the White House stayed the course. Press Secretary Sean Spicer explained in a press conference that Trump “believed that the evidence would ‘vindicate him.’” Then, House Intelligence Committee leader Rep. Devin Nunes dropped his announcement that some members of the Trump administration might have been caught up in incidental surveillance of international targets. Asked if he felt vindicated by this finding, Trump said “I somewhat do.” (Since then, it has been reported that Nunes’ source on these allegations was a White House staffer, which calls into question the validity of the findings.)

noun : “the searching out and deliberate harassment of those (as political opponents) with unpopular views”

Use it in a headline: “Trump downplays election hacks, calls investigation into Russia a ‘witch hunt’”

Say what now? Almost two centuries after the Salem Witch Trials, writers began using the term “witch hunt” to describe those literal searches for members of a community with unexplained “abilities.” More figuratively, however, it refers broadly to the same type of “political overreaction or hysteria” that fueled those literal hunts in the late 1600s. Trump’s description of the Russia investigations as such implies he believes Democrats are merely sore losers after the 2016 election and will seek any excuse to sully his name.

Editor’s note: This article is occasionally updated for relevance.