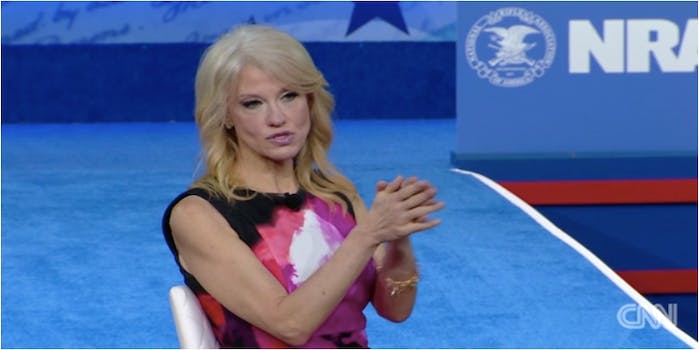 She called it 'pro-abortion' and 'anti-male.'

Merriam-Webster clapped back at Kellyanne Conway after she slammed feminism during the Conservative Political Action Conference (CPAC) Thursday, providing her own “conservative” definition.

“It’s difficult for me to call myself a feminist in the classic sense because it seems to be very anti-male and it certainly is very pro-abortion,” Conway said. “So there’s an individual feminism, if you will, where you make your own choices. I look at myself as a product of my choices, not a victim of my circumstances and that’s really what conservative feminism, if you will, is all about.”

📈'Feminism' is defined as "the belief that men and women should have equal rights and opportunities." https://t.co/Zjf7CAPUjL

Feminism is defined as both “the belief that men and women should have equal rights and opportunities,” and “organized activity in support of women’s rights and interests,” according to Merriam-Webster.

The notion that feminism implies victimhood, misandry, and “pro-abortion” would mean that all feminist movements seek to play the victim and eliminate competition. But as Merriam-Webster explained, feminism is literally defined as equal opportunity and advocacy for women’s rights and interests. Strangely enough, Conway advocated for equal pay in the same conversation—one of the tenants of modern “liberal” feminism.