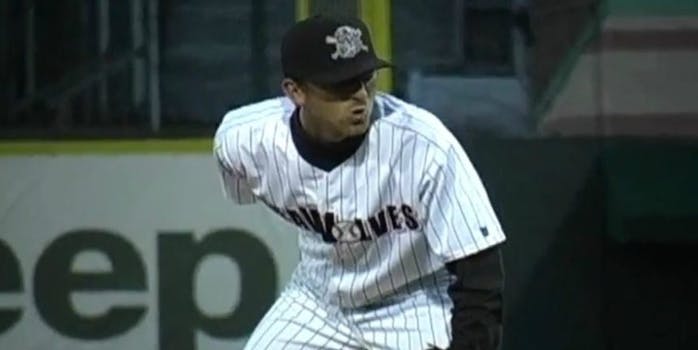 The Erie SeaWolves, the Class AA minor league baseball affiliate for the Detroit Tigers, did not have such a great season last year. They finished a dismal 62-79, 15 games out of first place and tied for fourth place in their division. But that’s only if the quality of the season is judged by all those pesky, genuine, undeniable facts. And on Aug. 25th, the team will hold a promotional night that should make a certain widely scrutinized White House counselor proud: It’ll be Alternative Facts Night at the ballyard, combining the so-called national pastime with the spirit of “truthful hyperbole.”

That’s how the team’s president, Greg Coleman, described the themed night in a recent press release. For those unfamiliar with minor league baseball, teams are far more willing to get a little more out there with their promotions and theme nights, and from the sounds of things, the SeaWolves are no exception. Here’s an excerpt from the team’s press release announcing Alternative Facts Night.

A fact is defined “as a thing that is indisputably the case.” On Alternative Facts Night, the SeaWolves will celebrate facts that the team knows to be true—even if some media outlets may dispute them. The first 1,000 fans in attendance will receive a 2016 replica championship ring celebrating the SeaWolves’ 2016 Eastern League title. While it was a tough decision to decide which championship to honor, the team will celebrate its most recent one.

“Alternative Facts have become a part of popular culture in 2017,” SeaWolves Team President Greg Coleman said. “We plan to inject truthful hyperbole into all aspects of the game on this night from our giveaway to the between innings fun. It’s going to be huge.”

SeaWolves fans are tremendous fans, the best fans. No one has better fans, and a complete and total sellout is expected on this night. While the capacity of UPMC Park is 6,000, 1.2 million fans are expected to attend.

The SeaWolves’s opponent on this night may dispute the team’s 2016 title run. Very unfair. It is up to the fans, who are tremendous fans by the way, to decide.

As cheeky press releases go, bravo to this one. The whole concept, of course, is a joking jab at Trump administration loyalist Kellyanne Conway’s “alternative facts” comment in late January, mere days after the inauguration. Defending White House Press Secretary Sean Spicer from criticism of his angry yet obviously false claims about the size of the inauguration crowd, Conway said Spicer provided “alternative facts,” which may go down as one of the worst rhetorical decisions of her career. The line immediately became the subject of countless memes, criticisms, and mockery, and it has endured as a point of reference anytime someone in the administration makes a factually suspect or outright false claim.

The SeaWolves aren’t the only sports franchise to have had some fun with this. Days after Conway’s controversial statement, the NHL’s Dallas Stars put a graphic on the scoreboard proclaiming the game’s attendance as 1.5 million, a shot at Spicer’s testy inflation of the Trump inauguration’s attendance. But the SeaWolves will be going even further, handing out 1,000 replica rings in celebration of the team’s nonexistent 2016 championship. From the sounds of things, it could end up being a hilariously perfect blend of political satire and sports. And the best part is, the SeaWolves can celebrate a win afterward, no matter what the final score might be.