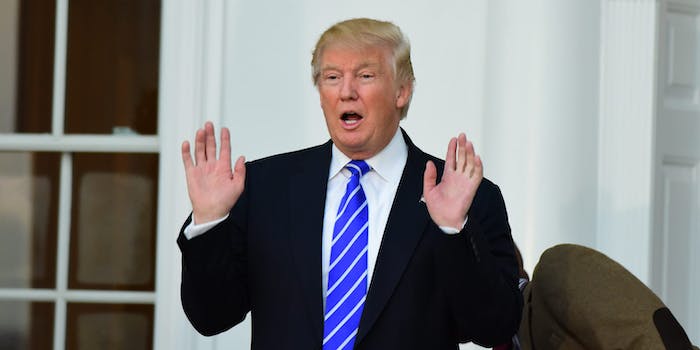 President Trump has learned his lesson.

It looks like President Donald Trump, like the rest of America, is anxiously awaiting former acting Attorney General Sally Yates’ testimony before a Senate Judiciary subcommittee later this afternoon. Trump may have been so anxious, in fact, he forgot to spellcheck a tweet about it. Of course, Merriam-Webster came to the rescue.

At 5:14 am, Trump tweeted about how he’d like the subcommittee to ask Yates about “classified information” that was published by news outlets “soon after she explained it to W.H. council.”

“Council,” in the context of Trump’s tweet, should be spelled “counsel,” as he was presumably referring to lawyers working in his administration. Trump has a bit of a history with misspelling words on Twitter.

The book jockeys over at Merriam-Webster were (somewhat reluctantly) ready to correct the president’s misspelling.

counsel: ⚖ a lawyer appointed to advise and represent in legal matters
council: 🙋an assembly or meeting for consultation or discussion

Yates was fired by Trump after she refused to enforce the controversial immigration executive order. Today, Yates is expected to detail conversations she had with the White House regarding former national security advisor Michael Flynn’s relationship with a Russian ambassador.

Flynn resigned from his position after he misled Vice President Mike Pence about calls he made with the ambassador in December 2016. Yates claims to have told White House lawyers that she had “serious concerns” about Flynn.

The hearing is set to begin at 1.30pm CT and can be watched via livestream here.