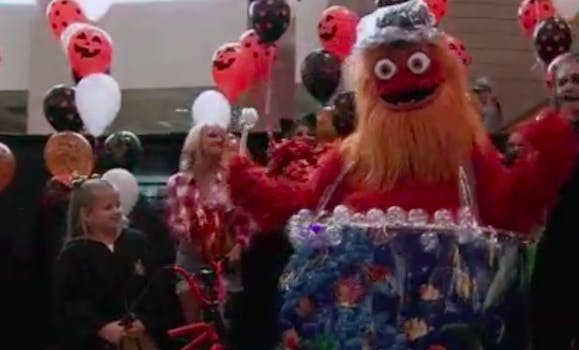 Obviously, there are Gritty costumes.

With memes essentially established as millennials’ main form of communication, it was only about time they took over as 2018’s favorite Halloween costumes.

This year, the moth and lamp couple costume was a big hit (because, obviously). The moth and lamp memes originated in late September after a redditor posted a photo of a moth outside his window. It soon spiraled into an internet-wide joke about moths being attracted to lamps and inspired these couple costumes. Pretty good for a generation known too well for ghosting and one-sided romance.

Comedian Larry Owens dressed up as child Cardi B (and kinda nailed it). The costume was a spinoff of Cardi B’s photo that went viral earlier in the summer, with the caption, “My momma said y’all have to play with me,” that led to a series of “My momma said” memes. The Daily Dot has reached out to Owens for comment.

Some went for their version of A Star is Born, which Yahoo has named costume of the year. The movie, starring Bradley Cooper and Lady Gaga, pulled in $250 million at the box office this weekend, and has inspired a series of memes since the trailer was released.

This couple went the extra mile and used a dog:

We couldn’t decide on a Halloween costume for Biscuit so we just made him the dog from A Star is Born. pic.twitter.com/68Mk7MHn4B

And then there’s Gritty, the mascot of the Philadelphia Flyers, that went viral a month ago. Last Tuesday, the Flyers’ Twitter account made a call out to people who dressed up as Gritty, and they got all kinds of responses:

This is Gritty Nick, and his wife Kate. Kate has Itty Bitty Gritty on board. pic.twitter.com/l2TIn4DMCk

And you can’t go wrong with Gritty pups: