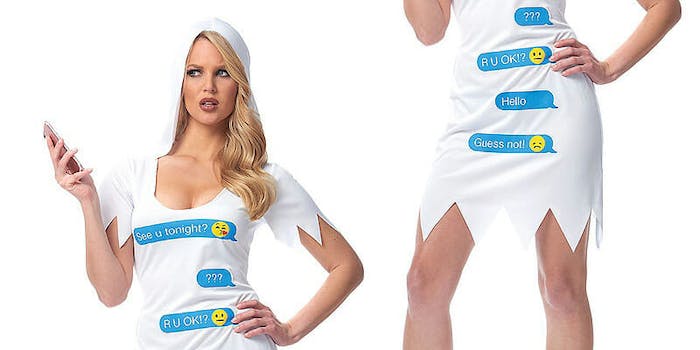 Modern dating, to put it gently, can be a nightmare. Because of the sterile ease of apps and technology, it makes it easier than ever to blow someone off. So just when you think you’ve made a connection with someone, the next thing you know–poof! You’ve been ghosted.

Ghosting, which is defined by Urban Dictionary as “to avoid someone until they get the picture and stop contacting you,” has become so prevalent and commonplace in our society, that Party City even made it into a Halloween costume this year.

The “Womens Ghosted Costume” (there is no “Mens Ghosted Costume,” because apparently only women get ghosted, cool cool cool) retails for $24.99 on the Party City website, and is described as a “a hooded white dress designed to look like a ghost with a series of unanswered texts on the front.”

“Eager texters will know not to bother you in this Ghosted Costume,” the description adds, which … doesn’t even really make sense, but whatever. Wouldn’t the person wearing it want you to text them? Or have they simply died from the mortification of having been ghosted and become an actual specter manifested to haunt whoever ghosted them out of existence?

So many questions, and naturally, Twitter had some thoughts.

They made being GHOSTed a costume for people who can’t find a BOO https://t.co/yawetSdq4D

😂😂 I can’t believe they really have a costume of how it looks when you’re being curved #ghosted pic.twitter.com/714J2y60nY

And then a few people used the costume as a way to give a head’s up to someone who was ghosting them:

Sent this to the person that's ghosting me and they didn't reply lmaooo https://t.co/LWMKIqfCFR

I apparently ghosted someone and today she asked me if she should get this for Halloween 💀 pic.twitter.com/SJW3rY4aLN

Oddly enough, the costume-designing geniuses at Party City were not even the first to come up with the idea. Last Halloween, Ohio State professor Claire Kamp Dush ‏ tweeted a photo of herself wearing a similar DIY version (for anyone who doesn’t happen to have 25 bucks lying around) to put a scare into her students.

Let’s all try not to actually ghost anyone this Halloween though—a little kindness goes a long way.