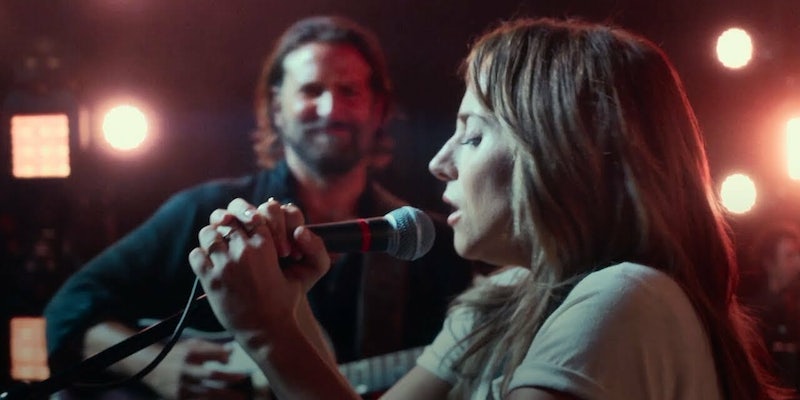 Bradley Cooper and Lady Gaga’s take on A Star is Born has been delighting moviegoers all over the world with its stunning cinematography, iconique performances, and the memes, of course.

ICYMI, A Star is Born is a musical romantic drama based on the original 1937 classic, which birthed two additional remakes after that, starring Judy Garland, and then Barbra Streisand. Gaga portrays struggling artist Ally who meets and subsequently falls in love with a grizzled alt-rock singer named Jackson Maine, played by Bradley Cooper (who directed the film).

As is usually the case with entertainment fans, however, people were making memes of the movie long before it ever released on the big screen. Ahead of the movie’s debut, folks were taking parts of the trailer and making some hilarious jokes out of a few scenes, such as Gaga’s out of context “ahhhhahhhhh” wailing on the song “Shallow,” which we only had a taste of during the trailer, as well as a cute moment between Jackson and Ally.

The pair have just arrived at Ally’s home in the wee hours of the morning, and Ally is getting ready to head inside and rest, then get ready for a shift at work. Maine, clearly already enamored with her at that point, stops Ally with a quick “Hey!” before she can run inside, as he just doesn’t want her to go. She turns around, says “What?” and he delivers a smooth line: “I just wanted to take another look at you.”

Ally’s response is to smile, with a blend of sheepishness, shyness, and knowing. She traces the outline of her profile with her finger as Maine extols the virtues of her nose (something he’s really excited about). It’s a cute scene, for sure, made into a fun meme by the geniuses of social media.

Now that the movie’s finally out, people are returning to the meme with renewed vigor, and some are even more hilarious ones than the first time around. Now we’ve got some extra pop culture references being thrown around for good measure, too.

Me in this scene pic.twitter.com/M1ZhmhNJKc

Teacher: ok put ur notes away time for the test
Me: hey
Notes: what
Me: I just wanted to take another look at you
Notes: *blushes*

Get in loser I just wanted to take another look at you pic.twitter.com/jyHK9BAggd

I give Star Is Born five "I just wanted to take another look at you"s out of five pic.twitter.com/qAz1evFaJ6

If these don’t make you want to see A Star is Born, we don’t know what will.