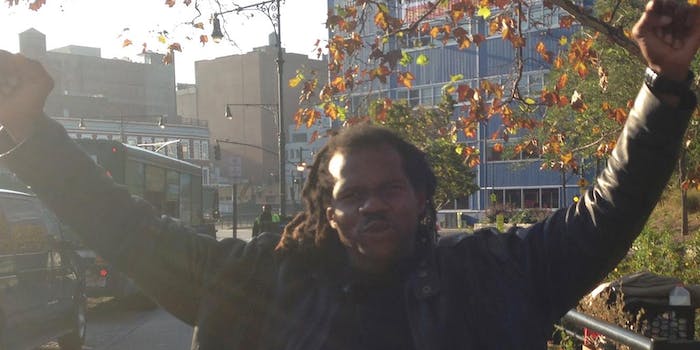 Leo, who's been working on an app with coder Patrick McConlogue, was picked up for trespassing in a park Monday.

Leo, known by the Internet as “the homeless coder,” was arrested Monday morning for trespassing in a park near New York’s Chelsea Piers. But as of 11am ET Tuesday, he is free.

Leo is the student of 23-year-old programmer Patrick McConlogue, and became well-known online for choosing to learn how to code, a skill that could change his future and help him get a good job. Two months ago, McConlogue approached Leo, who became homeless in 2011 after losing his job at MetLife, and gave him two choices: take 100 dollars or learn how to program. Leo chose learning.

Business Insider has followed the pair for the past two months, as Leo and McConlogue met every weekday morning for an hour -ong lesson.

“After McConlogue leaves for work, Leo spends much of his day reading through JavaScript books and practicing coding functions on the Samsung Chromebook McConlogue provided him. He was working on creating an app,” Business Insider reported.

McConlogue said he found out about Leo’s arrest for trespassing from another homeless man yesterday morning and headed down to the precinct but was unable to retrieve Leo or his belongings—including his computer. The arresting officer said that  although McConlogue showed him a receipt for the computer, he could not provide a serial number, and so it would remain in custody.

Leo’s Facebook page has more than 34,000 fans. McConlogue updated them on the situation yesterday, revealing that Leo is booked on the Today Show tomorrow morning and needs to be released before then.

And lo and behold, McConlogue said the messages on Facebook helped open some doors at the police station. He wrote that Leo was taken to the hospital for vomiting induced by stress and that his hearing in court went quickly. However, his laptop and “prototype phone” were not returned since, Leo and McConlogue still need to talk to an arresting officer.

There’s good news, though: Leo will make it to the Today Show after all.

Many commenters on Leo’s Facebook page were thrilled to see him released, but took it as a teaching moment about the perils of being homeless in the United States.

“Imagine the obstacles for the homeless person with limited resources who is trying to pull his life together, who is arrested for trespassing because they have nowhere else to go but a questionable shelter. imagine their only belongings of value are taken by the NYPD. imagine they have no defenders from the community,” a fan named Gina Gregorio wrote on Facebook.

“It is illegal to be homeless in this nation,” another fan wrote back. And many others seemed confused about the inability to return Leo’s computer or why he was arrested in the first place. McConlogue remains optimistic.

“This all feels so fast, it’s time to focus. After this we are going to bunker down and code. Leo is rounding third base, the crowd is on their feet, can he make it to launching an app?,” he wrote on FB. “My commit to teaching him ends in three weeks (our friendship does not).”