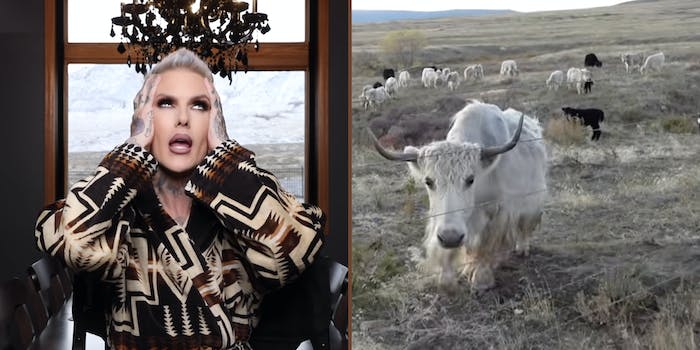 ‘I thought he treated them like family’: Jeffree Star is selling Yak meat from his Star Yak Ranch—and many fans are shocked

"Star killing yaks...is a pivot I genuinely did not see coming."

Jeffree Star rose into YouTube prominence by posting makeup tutorials which has earned him a hefty net worth of around $200 million according to various outlets. While many of these salary reporting sites’ findings should be taken with a grain of salt, his cosmetics line is successful and worth a pretty penny.

The YouTuber impressed other successful influencers with the sheer amount of wealth in his possession, too. Who can forget when Shane Dawson rolled around in Star’s pink Lamborghini and couldn’t stop expressing just how loaded the cosmetics guru was?

Star has been known to keep a pretty diversified investment portfolio, too. He told Dawson (as per Seventeen), “I own investment properties around the world, I invest in the marijuana business. I own an entire shipment and fulfillment center, I own a merchandise company, I print and manufacture everything myself.”

While there’s certainly a lot of money to be made for top influencers on platforms like TikTok and YouTube, business ventures that can be bolstered through one’s own personal branding is where the real money-making is. Dr. Dre for instance, earned a reported $2.6 billion for Apple’s purchase of the Beats brand, which dwarfs the amount of cash he earned for himself in his music career alone.

Star must know that there’s serious profit margins to be made in the ranching industry. The larger the cattle, the more care and land is required for their development but, in theory, the larger the payout per cattle will bring.

Star is getting into a meat business that could be described as bespoke: he’s raising, butchering, and selling Yak.

Yak meat has been likened to bison in terms of macro nutrients. According to Cook Gem: “Compared to beef or bison, yak meat has a sweeter and more delicate taste…yak has a higher moisture and iron content, meaning it is often richer and lighter in taste. Its fat content is similar to that of a bison or elk, creating a healthier alternative to beef…[it] has a comparable protein level, and contains more vitamins and minerals.”

While there have been studies about the health benefits of eating Yak over beef for a few years, Star is probably one of the more prominent public figures who have associated themselves with the animal as a red meat alternative.

But many have criticized his decision to go into the Yak ranching business, especially because his cosmetics line is 100% cruelty free and Vegan according to Heal Label.

The bulk of the criticism, many said, didn’t come from the fact that Star’s cosmetics are cruelty free, but because he didn’t “express…his intentions from the start” when he decided to hang out with a bunch of Yaks on a farm so he could decompress from the stresses of managing his multiple business ventures.

As it turns out, his Yak de-stressing “paradise” ended up being yet another business venture.

Others stated that they didn’t see anything wrong with what Star is doing and that the Yaks on his ranch are probably enjoying a better life than most other animals who are used as cattle on other properties.

The influencer started an Instagram account for his Yak farm, called @staryakranch, where he posts updates about the animals and selfies he’s taken with the Yaks in 2021. However, he recently shared some of the products offered by his farm, including ground yak meat, yak steaks, and yak jerky.

The Daily Dot has reached out to Star Yak Ranch for further comment.