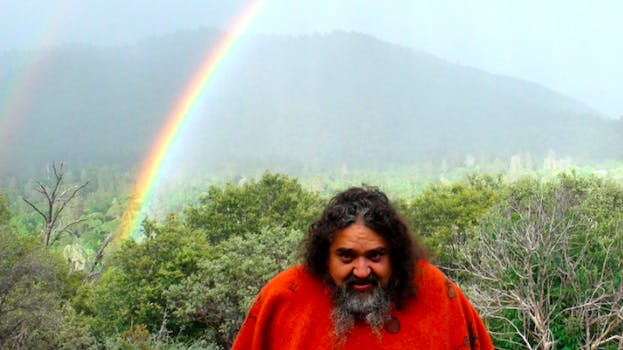 Double rainbows are more common than you think.

In 2010, Paul Vasquez had just finished an email to a friend about his life at Yosemite National Park when his life changed forever.

Vasquez was “telling her I was like Noah because I’m building what seems to be like an arc here,” he recalled an interview that year with the now-defunct website Urlesque. “I have greenhouses and gardens and fern trees and lots of animals here.”

Right after finishing that correspondence, Vasquez looked out the window of his small home and spotted an amazing meteorological event—a double rainbow. He captured the event with his phone, complete with his cries of excitement and jubilation at witnessing such an awesome natural occurrence.

Vasquez screams triumphantly while choking back tears in the same way a person would watching a concert or the final few seconds of a Super Bowl win. Vasquez stood awestruck and elated and couldn’t wait to upload the video to his YouTube channel to show, well, no one. Vasquez didn’t have many subscribers to the channel, even though he’d posted hundreds of videos chronicling his life among the ancient sequoia trees.

Roughly 800 or so people saw the video before Jimmy Kimmel came across it and tweeted it out to the world. Seven years later, the video has been watched over 44 millions times. It’s made Vasquez’s phenomenon a household name and spawned songs and commercials.

But who exactly is Paul Vasquez and just how rare are double rainbows? And is he always that damn excited about nature?

“I’ve always been someone who’s fearless and immensely confident,” Vasquez said in the interview.

Vasquez jumped out of helicopters for two years with the Los Angeles County Fire Department. He quit that and found a job working in Yosemite in 1985 as a park concessionaire, then as a security officer, emergency medical technician, and again as a park firefighter. Vasquez jumped to the National Park Service and worked posting public signs and fixing utilities around the park.

Vasquez married a Yosemite Indian and had two kids. In 1988, Vasquez bought the eight-acre piece of land he now lives and farms on for $31,000. He’s lived on Yosemite pretty much ever since.

2) Double rainbows aren’t all that rare

The occurrence of a double rainbow is magical but not uncommon. But what exactly is going on when two, or sometimes more, rainbows rain down on the Earth. Here’s an answer from Accuweather:

Nature’s natural color spectrum always elicits the same pattern (red, orange, yellow, green, blue, indigo, violet) when light is refracted, commonly known from the Roy G. Biv mnemonic. While a primary rainbow is visible when light is reflected once off the back of a raindrop, a secondary and usually dimmer rainbow is spotted when light is reflected twice in a more complicated pattern. The colors of the second rainbow are inverted, with blue on the outside and red moved to the inside. The second bow appears dimmer or cloudier because much more light is released from two reflections, and both bows cover a larger portion of the sky.

Accuweather explains that as many as four rainbows can be seen but only if they are reflected off of the earthly objects. But it’s just a natural phenomenon that occurs with some regularity. Not that wild.

Vasquez’s rainbow, however, lasted over an hour. He’s said in multiple interviews that his camera only captured about 40 percent of the color, and the rainbow was much brighter than what came out on film.

3) Spotting the rainbow was a life-changing experience

The Double Rainbow changed Vasquez life in more ways than one. First, the immediate reaction.

“You couldn’t see me on the ground, but at one point I had been knocked on the ground,” he told CBS News. “But the rainbow was a double rainbow and then it turned into a triple rainbow. You can’t see it on my camera but the whole thing was filled in with color. It was a giant disc of color. It looked like a giant eye looking at me.”

In fact, he said it was God’s eye. Speaking directly to him.

A few months after the Double Rainbow sighting, Vasquez experienced an even more significant life-altering moment. The video went viral and the response was amazing.

“A lot of people in the beginning were like, ‘Enjoy your 15 minutes of fame,’” Vasquez told the Daily Dot in January 2016, “and I knew it wasn’t that … This was something bigger,” Vasquez said. “The whole thing was so I could give a message to humanity. None of it’s about me. That message is simple: Love your fellow man, walk gently on Mother Earth, and connect to spirit.”

More often than not people ask Vasquez if his passionate response was drug-induced. But he cleared that once and for all in an interview with CNN.

“Everybody asks me if I was high,” he says. “No, I wasn’t high.” But he did compare himself to Noah again and said the rainbow was bringing the world a greater message.

“Think about it: If God wanted to give a message to humanity, would he give it to a president? No. He would give to a humble farmer in Yosemite. God is confirming that I am like Noah. That’s what’s going on in the video.

“I’m supposed to unite humanity under the rainbow.”

5) When he wonders what it means, he isn’t talking about the Double Rainbow

Everyone thought the iconic catchphrase had to do with the meaning behind the Double Rainbow. But that’s not at all what he was talking about it. In a video called “Double Rainbow Explained,” he said that he had been followed by rainbows. And he didn’t know what that meant. He was certain God was sending him rainbows, but he still didn’t know why. That’s what he was asking. “Why another rainbow?”

6) He was making videos long before the Double Rainbow

In an interview in 2012, Vasquez said that his passion for film was three decades old before the infamous video.

“I’ve been making videos since the 1980s. I started on the oldest formats they had on video tape. I was just backing up my hard drive when I started uploading videos [to YouTube]. I wasn’t trying to get noticed or get attention. I was just doing this for my descendants, you know, I wanted my descendant to see what I was like and all that.”

7) The video went unnoticed for months

Much like many of Vasquez’s early uploads, the video remained unnoticed until a friend of Jimmy Kimmel’s sent him a link to the weepy Double Rainbow sighting.

8) Then it exploded all over the web

After the video went viral, Vasquez made an appearance on Jimmy Kimmel Live.

The video, and Vasquez, made the rounds on websites such as Huffington Post, Fast Company, and the Chive and the videographer did countless interviews, including a CBS News piece.

9) The ‘Double Rainbow Song’ was a massive hit

Of course, just like Antoine Dodson and most of the other viral video hits of that era, Double Rainbow has a Gregory Brothers remix, and it’s been played nearly 38 million times. It also made quite a dent on iTunes.

After his divorce in the early 2000s, and thanks to driving a truck for 10 years across the country, Vasquez gained 200 pounds. Instead of spending his days walking around Yosemite to get his weight under control, Vasquez trained to be a cage fighter.

Paul “Hungry Bear” Vasquez had one professional fight in the super heavyweight division. His one official fight was against Ross Clifton, a 6-foot-8, 360 pounds beast from California. Vasquez lost via submission.

On the bright side, Vasquez did lose 180 pounds during training. He never fought again.

11) Vasquez lives on a self-sustaining plot of land

Vasquez has everything he needs on his small plot of land outside Yosemite. Planted at an altitude of 3,100 feet, Vasquez grows vegetables and cultivates over 35 different fruit trees. He chops his own firewood and raises chickens to provide eggs. Vasquez legally grows marijuana plants because he has a medical marijuana prescription for pain.

Vasquez posts still shots of his Yosemite National Park view to his official photography page and is active on Twitter and Facebook, where he continues to spread the message he shared with the Daily Dot last year.

“Love your fellow man, walk gently on Mother Earth, and connect to spirit.”‘

13) And he’s got a whole gallery dedicated to rainbows

Now that is beautiful. He just loves them. Check them all out here.

While Vasquez has turned down companies’ offers to use the Double Rainbow video in their advertising, he’s appeared in more than a few over the years. He’s in a Microsoft commercial and appeared in an in-flight safety video for Delta Airlines.

Here he is promoting Windows Live.

Vasquez told CNN in a 2015 interview that he’s only made $40,000 total from his online fame. He could have made twice that, but he said no to offers to put ads on his Double Rainbow video.

“The video is sacred,” he said.

And keeping things the way it is is the way he likes it.

Marsibil Sæmundardóttir’s film, Double Rainbow — What Did It Mean?, was apparently half-done when the Icelandic filmmaker when she took to Kickstarter looked to raise  $88,000 (Canadian) to film Vasquez at home in Yosemite. It looks like we’ll never see that other half. The campaign only raised $2,614.

To promote the  New Balance 890 Rainbow shoe, RunningShoes.com used Vasquez’s face and voice in an ad. The two settled out of court, and Vasquez laid out the details of the agreement in a YouTube video.